I'll play just about anything, and my interests run the gamut from deckbuilders to wargames to 18xx's to kid's games. I organize the Allegany Boardgaming Society in Western Maryland, and also run an afterschool game club at my kids' school.

If you're looking for a game, I'm marcnelsonjr on Yucata and Board Game Arena! 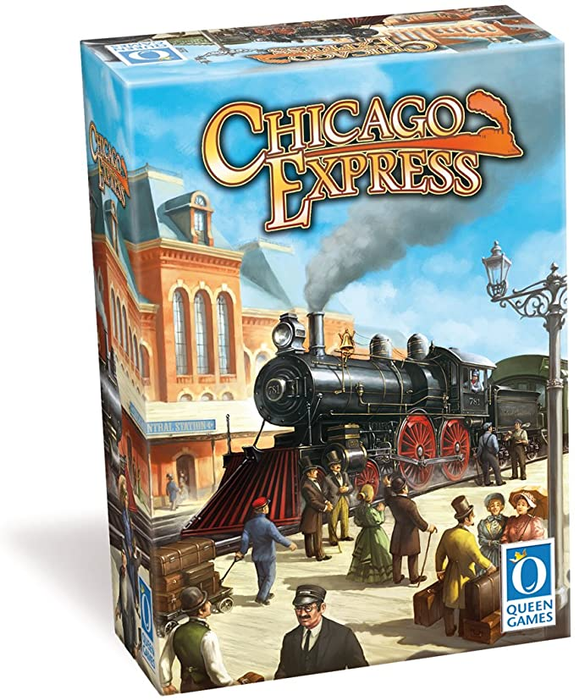 Chicago Express in alpha testing on Board Game Arena!

Another cube rails game is coming to Board Game Arena - #Chicago Express! 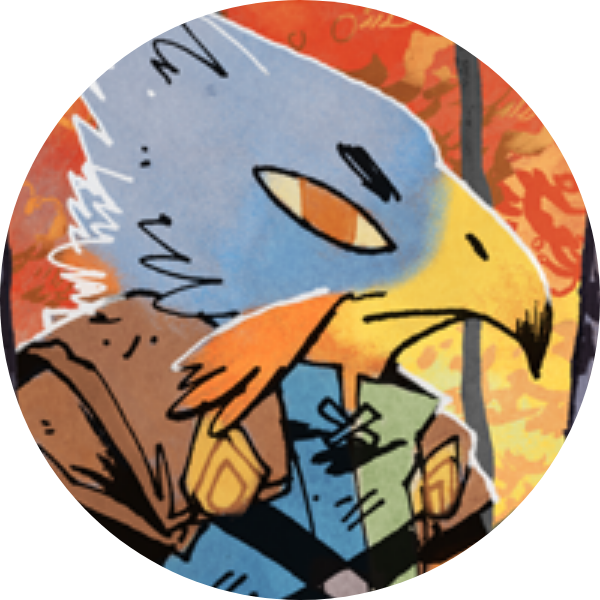 Trick of the Rails in alpha testing on BGA

If you're a #Trick of the Rails fan and you're on Board Game Arena, go sign up to be an alpha tester!

Note that you have to be an alpha tester to play - you can't invite non-testers to a game. So the more of us there are signed up, the easier it will be to find a game!

So I've got my collection imported:

If I scroll down to the bottom of the first page and click 'Next', it just takes me back to the top of the page.

Any idea what's going on here?

Just migrated my collection over from BGG, and I was wondering how games that have been published under different names are handled. For example, I have Ducks in a Row in my collection but it is listed here under All Queens Chess.

Is there  a way to pick one name or another to display in your collection? Thank you for your help, and thanks for having me here!

I was worried this was going to be a crappy cash-in - but from the rulebook, it looks like a real boardgame. Can't tell without playing if it's a good boardgame, but I'm optimistic.

My kids and I love the video game, so if it's any good at all, we'll be getting it. And it's good to see a new game that you can just buy - without giving a company an interest-free loan on KS.

Dang, I think I'm getting the first edition for my birthday. :)

Great game, and the new covers at least are very pretty. Those ghost dudes on the first edition were kind of creepy. :)

It's great for playing games live with a group. My (formerly in-person) group does 90% of our gaming on there.

Apps are nice, but they require everyone to have them.

Has any Asmodee takeover resulted in an improvement?

I like the look of the new header - very clean and compact!

Chicago Express in alpha testing on Board Game Arena!

Another cube rails game is coming to Board Game Arena - #Chicago Express!

How well do the games hold up? Are there problems with missing pieces? Do you notice 'normals' checking out the games, or is it just us nerds?

We tend to fall victim to shopping for experiences or feelings when we shop for games - forgetting we can already have those things without spending a dime.

Good week for gaming with the family! We played #Small World, #Caravan, #Watergate, #Jaws, and #A Few Acres of Snow. Some of those were inspired by playing on Board Game Arena, as you'll see...

Digital:
Good night with the Allegany Boardgaming Society! Two of us were early, so I taught #Watergate (currently in alpha testing). Then with the rest of the group, #Welcome to..., #P.I., #Paris Connection, and #No Thanks!.

Learned a few games on my own as well: #Caravan, which is a fun pick-up-and-deliver, and #Martian Dice Game - a push-your-luck game in the same vein as #Zombie Dice.

And struck up a game of #A Few Acres of Snow with @docker37 on Yucata - which led to teaching it to my son on there and then playing the cardboard version with my wife. Love this game!

On the #Magic: The Gathering front, the new set (Kaldheim) came out. I'd been saving up gold for a while, so was able to do a bunch of drafts. I like the set so far - nothing seems incredibly broken and the theme (Norse mythology) is cool.

Miniatures:
No games of #Frostgrave: Second Edition this week - my wife took the kids snowtubing. :) But I'm still cranking out minis! Painted up a couple of thieves, an archer, a crossbowman, and a whole troupe of Reaper yetis that will be used as white gorillas!

Sentinels of the Multiverse: Definitive Edition - Coming to Kickstarter on March 30 | Comment

I own a ton of Sentinels and I'm not rebuying anything, so I'm not really the target audience.

I do prefer the old look, but I'm glad to see the game getting new life and hopefully drawing new fans. It's a bit of a love-it-or-hate in game in our house, but my youngest son and I love it, so that's good enough. :)

This is a real service for those of us who avoid social media. Thank you!

Thought about getting it for the minis... and then I remembered how many unpainted minis I already have. :)

It's a good family game. Nothing super complex, but there are choices and interaction. The different scenarios add more replayability - we've only played the first one so far.

IRL:
Little slow this week... Played a game of #Adventure Land with the wife and my youngest on Tuesday. Fun game - wish the expansion was available! Then #Pax Pamir (Second Edition) with the boys last night. I won on the second failed dominance check... Can't let someone hog those purple cards! :)

Digital:
Good night with the Allegany Boardgaming Society! #Paris Connection just came out on Board Game Arena, so I learned that in preparation and we played a couple of games. I love cube rails! Then our usual round of #Codenames before another new to BGA game - #No Thanks!. We love these mean little fillers. :) Then we rounded off the night, as we often do, with a couple games of #Flaming Pyramids.

Miniatures:
For the second weekend in a row, I actually played some #Frostgrave: Second Edition! I've been reading and building and painting so long that this feels like a real accomplishment! :D

We played the "Living Museum" scenario, and my son definitely came out on top. The statues guarding the treasure made the middle of the board a slaughterhouse, so he used Telekinesis to pull treasures out of there. My archers whiffed on some big rolls, and my spellcasters didn't accomplish much either. The boy came away with four treasures to my one.

Can't wait to play some more! Next order of business is a playmat, so that our dude aren't running across our kitchen table. :)

#Space Base has the same "tableau activated by die rolls" mechanic as Machi Koro.

Getting a little further afield, #My Little Scythe has some similarities to Catan. Along with the resource gathering and hexmap area control of the original #Scythe, My Little Scythe also has die rolls that generate resources on the board. And while there isn't direct trading, putting those resources in hexes controlled by opponents also gains friendship for you.

Trick of the Rails in alpha testing on BGA

If you're a #Trick of the Rails fan and you're on Board Game Arena, go sign up to be an alpha tester!

Note that you have to be an alpha tester to play - you can't invite non-testers to a game. So the more of us there are signed up, the easier it will be to find a game!

Excellent! I used to play on there a lot. If you ever want a game, message me here and we'll set one up!

We started playing games with my oldest when she was 4. She went through a "too cool" phase for a while where she wouldn't play with us, but over the past year, she's come back to the fold.

The boys have always been on board. I think our oldest boy learned to read from playing #DC Comics Deck-Building Game. :)

I haven't got to play as the Corvids... My youngest son keeps taking them, but hasn't quite figured them out yet. :)

I think you could probably do ports in 1775. The Brits have naval movement, but both sides have to defend against it - and there are a ton of spaces in Canada vulnerable to it.

I'm a big AFAoS fan! I also have #Wilderness War (although I haven't played in forever), as well as #Bloody Mohawk: The French and Indian War. Just got to visit Jumonville Glen this summer!

I haven't played enough 1754 to come to a decision.

I like the state-based victory conditions of '75, but the port spaces in '54 are a big improvement. Naval movement was so wide-open in '75 and the port spaces restrict that. I also think the way Indians work in '54 is better.

I will almost certainly keep them both, anyway! I have a bunch of FIW games, but not much on the Revolution.

Of my Christmas presents, I've played #Mapmaker: The Gerrymandering Game (really good!), but not #The King is Dead: Second Edition yet.

Longer-term, I picked up #Liberte and #Caravan last year, but still haven't got them to the table. Caravan is on Board Game Arena, so maybe I'll learn it on there before I rope the family into it. :)

I just like being able to tell the difference. Some other way of distinguishing them could work.

Good article about one of my favorite genres! I do need to try Eclipse - someone in my group is a fan and we should get it on the table once we're back in person. #1775: Rebellion is fantastic - my wife and I have a blast playing in the tournament at World Boardgaming Championships every year. #1754 Conquest: The French and Indian War is excellent, too - the same mechanics, but a much different feel.

#History of the World for sure. You get the Risk feeling of conquering huge swathes of territory, but the epoch system keeps the snowball effect from completely taking over.

#Small World is always the game I recommend when someone is looking for "Risk, but good." It takes a page from History of the World with your races going into decline. And you have to admit, it's more fun playing as a Flying Halfling than as... blue. :)

#Nexus Ops is kind of a cross between Risk and A&A, but way faster than either. The combat system has A&A-style differentiation of units with the addition of terrain considerations. The victory point system rewards aggression rather than turtling. And (the Avalon Hill version at least) just looks so damn cool!

Lastly, if you want a Risk alternative that is still Risk, there's #Risk 2210 A.D. - the best of the series. The cards introduce uncertainty ("Risk" you might say), and the fixed number of turns and bidding for turn order fix the way original Risk drags.