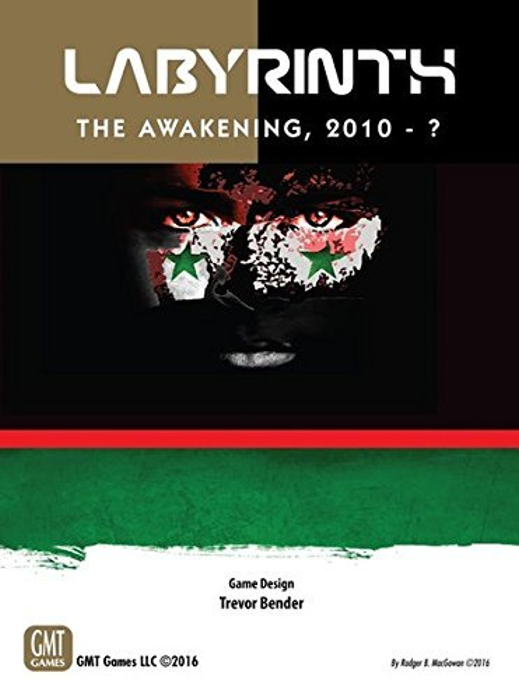 Mechanics:
Categories:
Note: The LABYRINTH: The Awakening, 2010-? expansion uses the same map, base rules, victory conditions, components, charts, and solitaire rules from its predecessor game, thus ownership of LABYRINTH: The War on Terror is required for play.

On December 17, 2010, Tunisian street vendor Mohamed Bouazizi committed an act of self-immolation to protest harsh treatment by local authorities. His sacrifice brought down the Tunisian government a month later and sparked a popular movement to be known as the Arab Spring that spread across the Muslim world, toppling 6 governments and igniting 3 Civil Wars. The Western world struggled with how to influence these disparate struggles for good while Jihadists and other reactionary elements deftly maneuvered to fill the power vacuums created.

LABYRINTH: The Awakening, 2010 - ? expands on LABYRINTH: The War on Terror, 2001 - ?, a 1-2 player card-driven boardgame simulating at the strategic level the ongoing bid by Islamic extremists to impose their brand of religious rule on the Muslim world. The expansion continues where LABYRINTH left off adding new rules and cards to cover the last five years of history. Included are new mechanics to simulate the grass roots political movements of the Arab Spring and the resulting Civil Wars. LABYRINTH: The Awakening, 2010-? provides 90 all new event cards, additional markers, cubes and cylinders, and 7 new scenarios, including 2 that are playable to conclusion in 7 turns or less.

Introduced in this expansion are Local Security Forces, cubes which serve the dual role of providing state security as US Troops withdraw, and also represent those elements in a Civil War, including paramilitary protectionist and preservationist insurgency forces, which are fighting for a greater degree of representation in their government or are resisting the imposition of Jihadist will. Another new element is Awakening and Reaction markers. These are placed in country boxes by various events, are similar to influence markers from TWILIGHT STRUGGLE, and act as modifiers for or against War of Ideas and Jihad operations. Finally, Sub Saharan Muslim countries are added as country mats to allow for the representation of the struggles that have occurred recently in Mali and Nigeria.

Since publication of LABYRINTH, fans of the game have expressed an interest in updating it based on more recent events, and a variety of new cards and variants have been freely shared on the web. This expansion to LABYRINTH fulfills that desire by providing up-to-date events and rules allowing the game to continue to serve as an effective model of the ongoing struggles in the Muslim world. If you have wondered how recent events in the Middle East could be portrayed in game format, and how outcomes could have been shaped differently, this expansion is for you!

Games similar to Labyrinth: The Awakening 2010-?