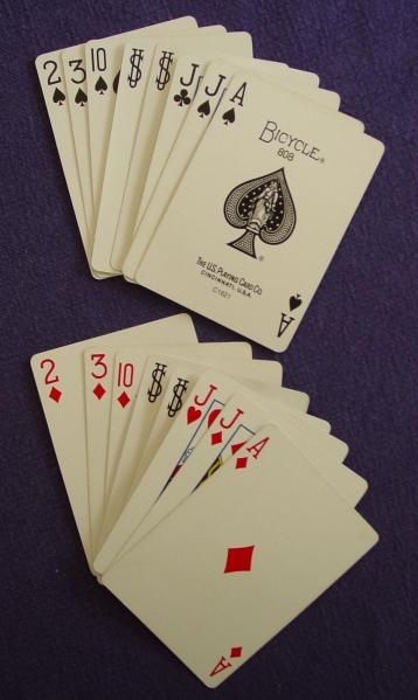 Pitch, by whatever point-variant is played, is in the similar vein as Spades and Bridge as a trick taking game. Play uses a standard deck of 52 cards. Players partner with the player across from them and are each dealt 9 cards.

The bid begins to the dealer's left at a minimum of four points and goes around the table, with players increasing the bid based on what they think they can take; if everyone passes the bid, the dealer is required to take the bid at four. The player who announces the highest bid takes the position of dealer/leader and calls the trump suit, which is the only suit of import in this game (excepting the jokers and the left bauer or off-jack [jack of the same color, but not the trump suit]). All players, save the dealer, discard all the cards from their hands that are not of the trump suit and request enough cards from the remaining 18-card deck to bring their hand up to 6. (*Note: If a player mistakenly discards a trump card, or one of the three other special cards, it is a free-for-all to whomever notices and picks it up off the table first) The remaining cards in the deck are given to the bid-winner/leader, who can pick through them one-by-one, and pass any remaining unseen cards to his partner, each of them discarding to 6 before play begins.

Play begins with the dealer/leader leading in the trump suit. Play proceeds around the table, with the player playing the highest valued card taking the trick and leading the following trick. Players may only play cards that are of the trump suit, other remaining cards are useless. If a player takes a trick and no longer has cards of the trump suit, that players is out, and the player to the left then begins the trick. Cards are ranked from Ace to Two, with the Off-Jack, High Joker, and Low Joker respectively taking the positions between the Jack and Ten.

Points are accrued by teams for taking the point cards in the tricks they take, which for 10-point pitch are Ace, Jack, Off-Jack (Left Bauer), High Joker, Low Joker (one has to rank higher than the other for play continuity), Ten, Three, and Two. All are worth a point apiece, except the three, which is worth three. The two is retained by the player who played it for his or her team and is not taken along with the trick.

Both teams receive points for the point cards they take, unless the high-bidding team does not meet their bid goal, in which case they go "set" and lose their number of bid points instead of gaining. Teams play to 52 points.

Another version, playing for High, Low, Jack, and Game plays with hands of 6 cards.

There are four possible points in a hand:

Starting at the dealer's left, each player has one chance to bid, with a minimum bid of 2. Players can overbid a previous bid. The person who wins the bid gets to name trump. Dealer has to take the bid if everyone passes, so if you have a decent hand when your partner dealt, it's a good idea to put in a 2 bid if the first person didn't bid. Not only will your partner not get stuck, but the third person to bid won't get to take an easy 2 bid if they want it, and will have to go 3.

If you bid and don't make it, you go down that many points. You can make points if your opponents bid.

After the bid and declaration of trump, some people allow trashing and getting up to 2 new cards.

The player who won the bid leads a trump card. After that, the person who won the previous trick leads. Players must follow the suit led if possible, or play any suit if not, and may trump in at any time. Highest card of the suit lead takes the trick, if no trump is played. If trump is played, highest trump takes it.

"Jersey Pitch" adds the rule that the 5 of trump is worth 5 points.