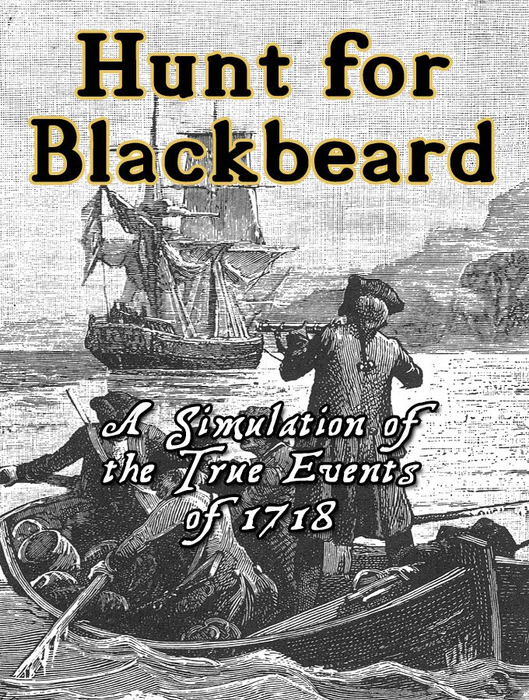 Now the Hunt for Blackbeard is on again. As Blackbeard, you must select your anchorage carefully, as you’ll need all your guile to survive. Will you cash in for the diversions of a pirate’s life, or return to acts of piracy as your money runs out? The hunters are coming—evade them, or prepare defenses and risk luring them in? As the Hunters, how long can you afford to press your stable of informants and arm your expedition? You know Blackbeard: he will not sit idle. His ambitions may expose him, but he is getting stronger day by day. How will you approach—a flushing strategy, or a precision strike? Be careful, as your quarry is apt to bite!

Hunt for Blackbeard pits two players against one another as hunter and hunted in a fast-moving game of detection, deception, and confrontation.

Hunt for Blackbeard is a two-player boardgame that portrays the effort in 1718 by the colony of Virginia and the Royal Navy to track down the notorious pirate Blackbeard (Edward Thatch) as he sought refuge in colonial North Carolina. It features the historical events, places, and personages involved in Blackbeard’s demise 300 years ago, and the real-world challenges of “golden-age” piracy and pirate hunting. Players. One player takes the role of Blackbeard and the other the pirate hunters. Blackbeard seeks to commit acts of piracy or to enjoy a pirate’s life while remaining free. The hunters try to discern Blackbeard’s plans to thwart his piracy. The game may end in a battle in which either the hunters capture Blackbeard or the pirate wins by seizing a hunters’ ship as his prize!

Sequence of Play:
In each of up to four turns, players draw secret tiles that gradually reveal opportunities for Blackbeard to pursue his piratical aims and for the hunters to interview informants who may know of Blackbeard’s whereabouts.

The players next commit Action pawns behind their screens to prepare defenses, sail, scout, or plan piracy. Blackbeard then secretly records any changes to the information on the main map. As the hunters take their turn, they inspect markers on the map—often secretly—as they seek Blackbeard, his camp, or any wake of his passage. Blackbeard will not know how much the hunters have learned before they strike!

Combat ensues if hunters catch up with Blackbeard’s sloop. If Blackbeard remains unchallenged at the right location, he carries out his piracy, placing gold cubes onto tiles among those drawn. Blackbeard can win through piracy while evading the hunters. But if a boarding action occurs, the winner automatically takes the game, enabling the pirate to win by girding for a fight and luring the hunters in.

-extract from publisher description, with a correction from the designer

Games similar to Hunt for Blackbeard