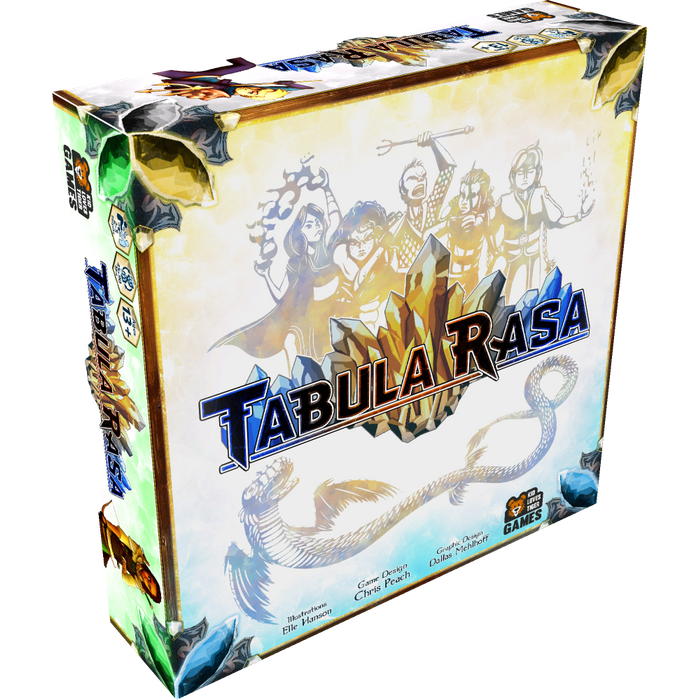 Description from the publisher:

The world of Tabulette was at war. Creatures infused with the very Magics of the land lay siege to the many races and kingdoms of the land. The Dwarves ran to their caves, seeking refuge from the attacks, they sealed themselves away.
The Elves used the remaining magic they had to conjurer a protective dome around their capital, that would keep them isolated for the next 500 years. The Paurian cat people of the jungles seemingly disappeared.The Honorable Canin people went north, far north of the Great Mountains. Humanity was all that was left to fend off the creatures hell bent on destruction. Though the Magi Elders had worked to seal each creature,almost 5 centuries later, the seals have begun to break.
The creatures have begun resurfacing and only the greatest Champions of the proud Banners can expel them again, hopefully this time, for good....

In Tabula Rasa, 2-4 Players race through one of the crumbling seals, to wade through the waves of enemies and defeat the great threat that lies there! Players will find gear for their Champion, learn new abilities and gather loot, all while completing the quests the banners had laid out for them. Though in the end, only one though will be honored in the Hall of Glory.

On each turn, players spend their crystals to performs actions and abilities, bringing them deeper into the threats lair, or allowing them to confront and defeat different threats and enemies that appear during the game.

Players will be able to build a better pool of Crystals to go back into their bag, as each time they must draw but cannot, their discard pile of used crystals goes back into the back, gets shaken up and drawn from again. Having a better or stronger pool gives you the ability to maximize your turns!

Some crystals fuel abilities, some are bad and need to be culled, and some are blank slates that slow you down. Building a good pool will help you complete quests and defeat minions, advancing the boss's threat track.

The Boss of the dungeon or lair isn't just going to sit back either. Every round their influence on the seal is felt, their minions attempt to stop you, and of course and as the game progresses on the threat track, when it reaches it's threshold, players ALL confront the ancient threat for glory.

When the seal has been cleaned out, players count up their Glory and the winner's legend rings out through the land as they enter the Hall of Glory!