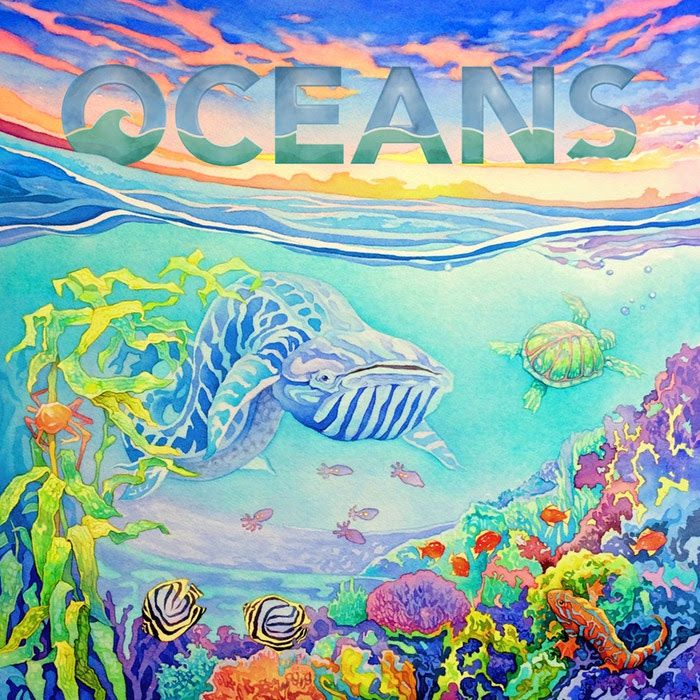 Four years in the making, Oceans is the next stand-alone game in the award-winning Evolution series.

Theme
Enter a vast, underwater cosmos: a mysterious interconnected world of sharp teeth, glowing eyes, and black ink, where your survival depends on your ability to adapt to the unknown. The foundation of the oceanic food chain are billions of one-celled organisms called phytoplankton that capture the sun's energy through photosynthesis. The next level are species that feast on the sea's abundant plant life — zooplankton. All of this takes place in Catherine Hamilton's beautifully illustrated central board called the Reef. Every other oceanic species is a predator, each bigger than the next, all the way up to the dreaded apex predator. And even bigger than apex predators are enormous filter feeders that gently swim through the ocean scooping up everything in their path with their baleen.

Gameplay
Oceans is a continuation of North Star's quest to make a gamers' game that is easy to teach. Game designers Nick Bentley and Dominic Crapuchettes don't think people need to sit through 30+ minutes of rules explanations to get an immersive experience.

The foundation of Oceans is a simple turn structure and a deck of 10 straightforward traits, making it easy to learn all of the cards and wade effortlessly into the first game. The 10 traits were chosen because of the rich thematic interconnections, providing a tapestry of synergistic card play. Additionally, there are 4 randomly chosen scenario cards that activate (and sometimes deactivate) at various points during the game. The scenario cards impact the basic tenets of gameplay, encouraging people to vary their play style and strategy each game.

This foundation loosely mimics a scientific oceanic ecosystem, similar to what you've come to expect from games in the Evolution series. This is the core of Oceans and it's fully playable on its own. But there's more if you are willing to dive a bit deeper...

Oceans also includes something which will break the seams of the scientific reality you've come to accept: The Deep. The Deep is a deck of 100 unique power cards that require an additional cost to play. These power cards range from things you might find in nature to the fantastical Kraken or Leviathan.

Oceans is an engine builder where the world of science is disrupted at the seams by the world of fantasy. Players must adapt to the changing environment with an interconnected ecosystem that can survive and thrive against the inevitable march of time and the natural struggle of predators seeking to survive. 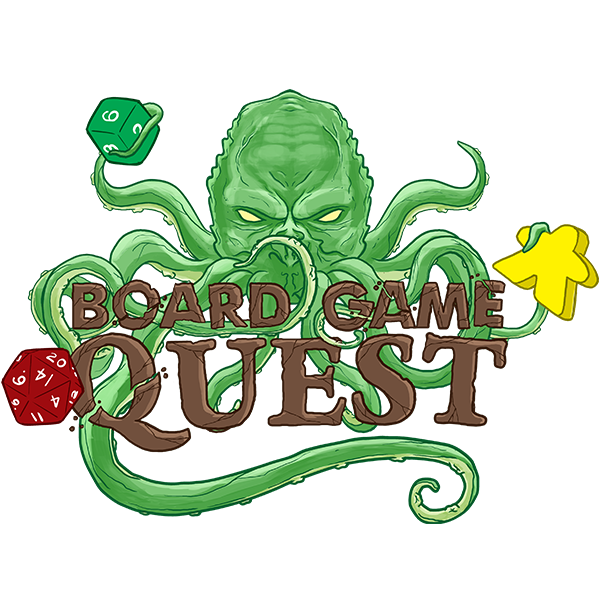 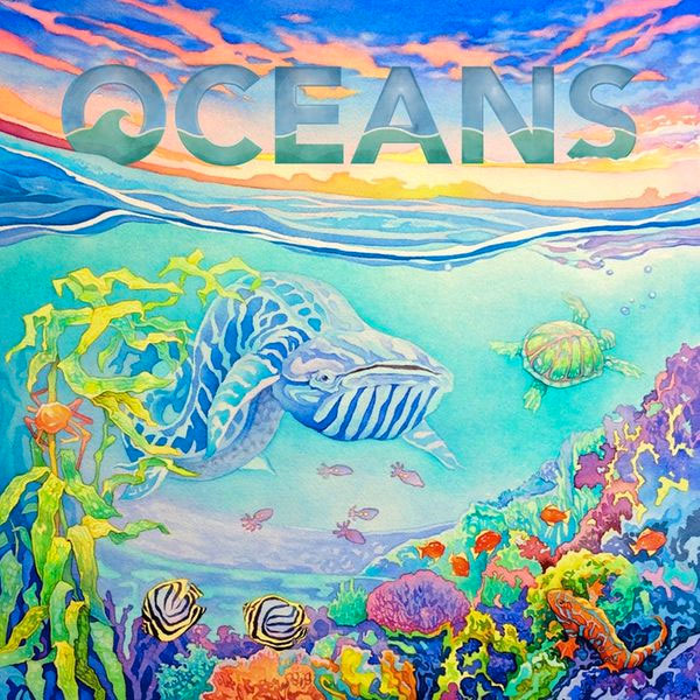 “The ocean stirs the heart, inspires the imagination and brings eternal joy to the soul.” ―Robert Wyland Today we are looking at Oceans from NorthStar Games. This is a game about buildi... 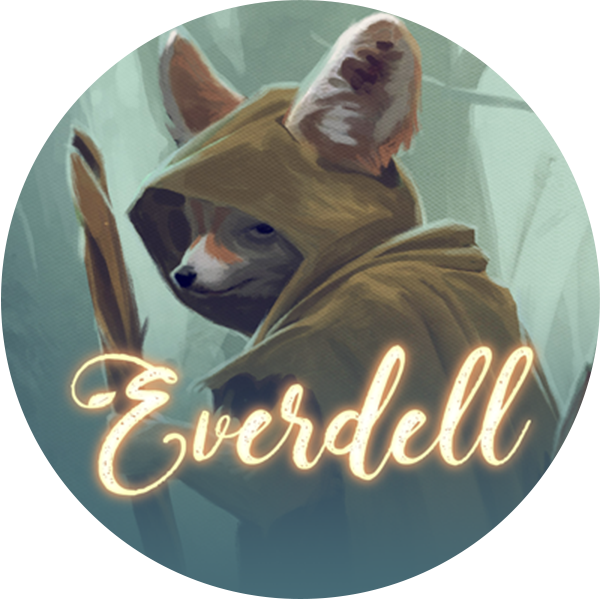 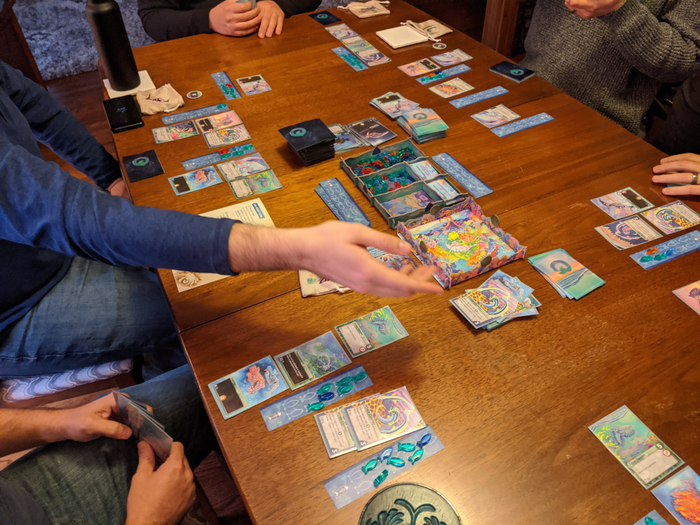 On Sunday, I invited some friends over to play my most recent arrival, #Oceans, and I thought it would also be fun to play a game of my current favorite game, #Evolution: Climate, beforehand. In case you aren't aware, Oceans is the follow-up game to Evolution from North Star Games.

So that is what we did! We started with Evolution: Climate. As stated above, this is my current favorite game. We played at 5 players (1 first-timer), and it was an extremely close game. The winning score was 63, I had 61, and I think the lowest anyone had was 55. Great game!

Next, I taught everyone Oceans. After setup was complete, teaching probably took about 15 minutes, and I'd say it was fairly easy to teach. I actually had 2 more friends show up before this game started, so I let them both play, and I sat out and ran the game and answered questions and they came up. For anyone not counting, this is a full game (6 players).

With the Kickstarter, I received the 5-6 player expansion. The rules for this warn that Oceans was designed for 2-4 players, and adding more makes for a lot of downtime. This was true in our case. While you're still partially engaged on other people's turns, I can see how playing at 6 is maybe a little too much downtime. I expect the downtime to decrease with future plays, however.

These games share a lot of the same DNA (science joke, heh), but are definitely distinct games.

Turns
One major difference is the way turns are played. Evolution is played in rounds with phases, with some phases having round-the-table turns within them. Oceans is completely played in discrete turns. This is the main reason the downtime could be a slight problem for larger groups.

Feeding and Scoring
So in Evolution, you score after every round, and you score the amount of food tokens your species were able to eat in that round. Whatever populations go unfed are lost and must be paid for again if you wish to regain them during the next round. If you aren't able to geed a given species at all, that species goes extinct. You can eat plant food from the watering hole, if available, or, if your species is a carnivore, you can eat the populations of other species, which can also cause them to go extinct.
In Oceans, it doesn't matter how much your species eat during a round. Scoring is achieved through the process of "aging", which is simply moving a certain number of population from your species board to your score pile. If you are not able to age the correct amount, that species goes extinct. This is the only way you can go extinct. You cannot be driven to extinction by an attacker.

Cards
Evolution has a set of trait cards (maybe 20 different traits or so) from which you can build tons of different species, and these traits are duplicated many times over throughout the deck. You may not duplicate them on a given species, however.
Oceans, on the other hand, has 2 separate decks: the Surface deck, and the Deep deck. The Surface deck is very similar to the deck in Evolution, in that the (12) traits within it are duplicated many times over, are well-represented within nature, and can be used to build all kinds of cool species, and really cool combos and engines. The main difference here is that you can duplicate these on a species if you want, and the benefits stack.
Then there is the Deep deck. This really changes the game. There is a sort of midpoint in the game when these cards can come into play, and then things get crazy. The cards in this deck are 100% unique - there is only one of each. They are more powerful than the surface cards, and in many cases, not at all rooted in science. This is a lot of fun, and makes for some WHOOOAAAA moments.

Feel and Strategy
Oceans feels a bit more forgiving than Evolution. It is hard to kill off someone else's species, where in Evolution, it's extremely plausible. To me, Evolution has a bit more tension, and feels a bit more like survival. Because of this difference, in my observation so far, it seems less advantageous to have an unassailable beast of a creature in Oceans vs. Evolution. I can be wrong, of course, but it seems to me that you're better off trying to get more species out onto the table (while being able to sustain them), and trying to tie up your opponents resources (cards) to prevent them from getting successful species onto the table. Those are just thoughts after a few plays, keep in mind.
Oceans definitely has the edge in "WOW factor", because of the Deep cards. Because of these cards, there are always going to be creatures that no one else at the table can create, and that makes for a fun time. Also contributing to this wow factor, in my opinion, is the art. The art in Evolution is fantastic, and they stepped it up even further on Oceans. The game is beautiful - very vibrant and colorful. 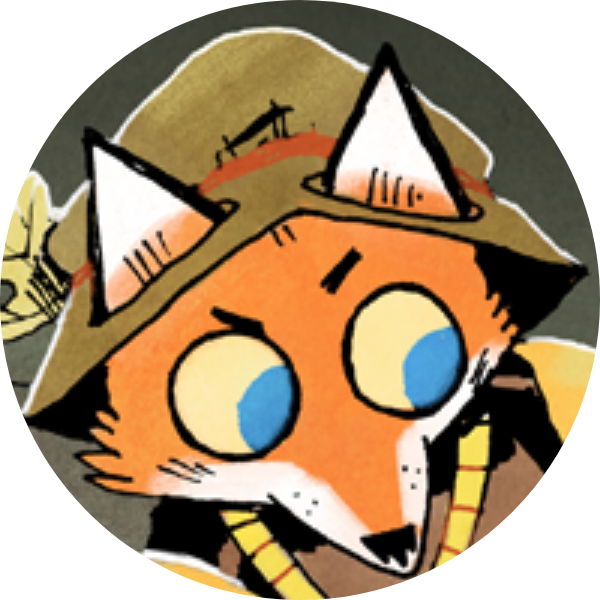 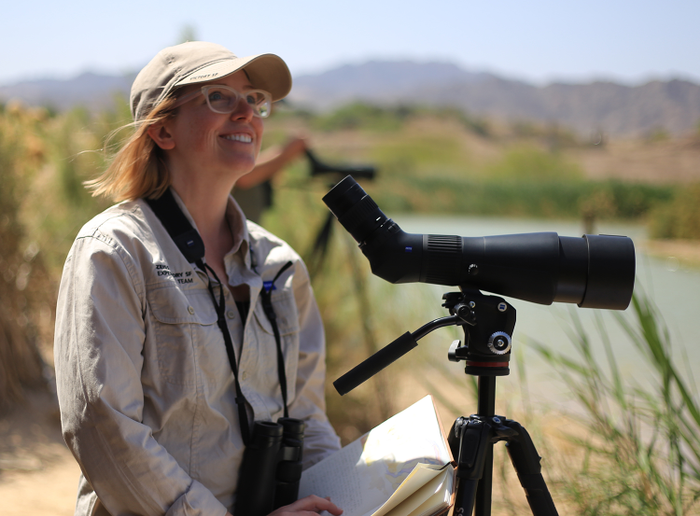 Catherine is a renowned bird watcher/artist with a stroke of genius for capturing the beauty of wildlife. While her pursuits leave her practically homeless half of the year, it's pretty clear by now that no one's forcing her to do this. In 2014, her beautiful watercolor unexpectedly crossed over i...

Stay on the surface or find the terrors of The Deep in Oceans: An Evolution game, a more predation-centric spinoff that’s a great change for players who are looking for more directly interact...