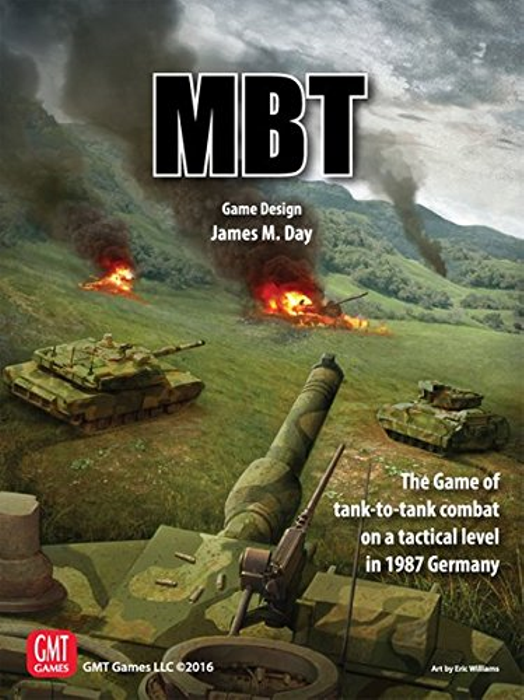 Europe's worst fears are now a reality. For the 3rd time in the century, war erupts. A global economic crisis, strangling sanctions and runaway military spending trigger major unrest across the Soviet Union. Its leaders need to fan the flames of nationalism and scapegoat Western aggression. They see no alternative but to launch a massive invasion of Western Europe. No less than five armies surge across the border into West Germany. A coalition of German, American and British forces is braced to hold the line against the onslaught. Can they succeed? Will the sheer magnitude of Soviet forces overwhelm them?

MBT is a complete game system modeling the US 7th Army and the GSFG Soviet mechanized forces of 1987. It is M1 Abrams (105mm and 120mm armed versions) versus a whole stable of Soviet armor with their T-80s, T-72s, T-64s, and upgraded models of the T-62 and T-55. There is even M60A3s sprinkled in to balance out the US tank inventory. Bradley IFVs and CFVs mechanized units are set to take on their counterparts mounted in BMP-1, 2s and even a few 3s. Not to be overlooked, M113A2s and BTRs and MT-LBs are also set to make their appearance.

Mechanized infantry and their related weapons are in abundance, including the M47 Dragon, M72 LAW, AT-7 Saxon, AT-4 Spigot, and multiple RPG versions.

The scale is right down in the weeds with individual vehicles, infantry squads, half-squads and sections. Each hex is just 100 meters across, so it is going to be nose-to-nose action at its finest.

The rules cover the total realm of modern mechanized combat with ATGMs, including TOW and deadly Soviet gun launched missiles like the AT-11 Sniper and AT-8 Songster, special armor (including ERA), advanced night fighting with thermal imagers and image intensifiers, advanced artillery with ICM and laser guided shells, helicopters, including the AH-64A Apache and Mi-24P Hind-F, attack aircraft, including the A-10A Warthog and Su-25 Frogfoot, and missile and gun armed AA units to counter the deadly air threats. It is all included in this total package.

Battle it out in 10 scenarios over the 5 double-sided geomorphic maps, covering open and wooded terrain and urban settings.

Two expansions add the FRG and BAOR Forces. The addition of the French III Corps and 4th Canadian Mechanized Brigade Group is also a possibility.

Each 7/8" double-sided counter represents a single vehicle, towed gun, aircraft or helicopters.
The 5/8" double-sided leg unit counters represent squads, half-squads and sections, including their attached weapons
The remaining 5/8" double-sided counters represent commands, damage, status, terrain effects, turrets and others.
Full color illustrated rulebook and playbook and various player aids and reference cards
Modular rules system with Basic, Advanced and Optional rules section. Players may keep it simple or make it as complex as desired.
The game includes detailed instructions for designing scenarios. Add the forces and geomorphic map boards from the FRG and BAOR expansions and even the geomorphic map boards from the Panzer World War II series for even more possibilities.