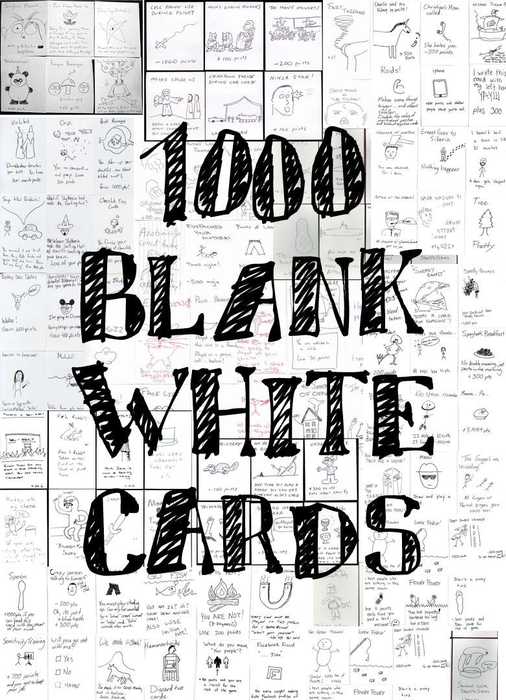 1000 Blank White Cards is a public domain card game, which allows the players to make the cards during the course of the game. There are no initial rules, and while there may be conventions among certain groups of players, it is in the spirit of the game to spite and denounce these conventions, as well as to adhere to them religiously.

Cards may feature a title, a picture, a score, a rule, or any other content, and need not be limited to one side or even to a single card. Early iterations of the game included cards with attached objects, and cards of a variety of sizes and shapes within the same deck and gameplay session. Many cards in later decks have a point value, but this is by no means a requirement.

Cards generally include hand-drawn pictures. The game encourages quick sketches by non-artists, which can add to the overall ironic orientation of the game. Card illustrations can represent anything the designer wants to feature, from serious to absurd. (However, usually cards tend toward the latter.)

Game play conventionally follows a "draw one, play one" rule, with standard rotation; however, this, as with any game parameters, can be arbitrarily altered in play.

In one variant, blank cards are simply made available to all players at all times, and can be created without limitation and played in turn. In other variants, players seed an otherwise blank deck with their own invented cards, which are shuffled in with blank cards to form a deck of about 60-90 cards. In this latter variant, a player may only craft a new card if he or she draws one of the blank cards during the course of play.

In most cases, unless countermanded or constrained by rules created during gameplay, players may play a card on themselves, on another player, or on all players. Card rules and actions may counter other cards which have already been played.

The game ends when the deck is exhausted. Points may be tabulated and a winner declared. In some variants, players may then lay out all of the cards face-up for the "epilogue", which allows players to choose the best cards to seed the deck for the next game. In other variants, all cards must be retained and reintroduced, regardless of perceived quality.