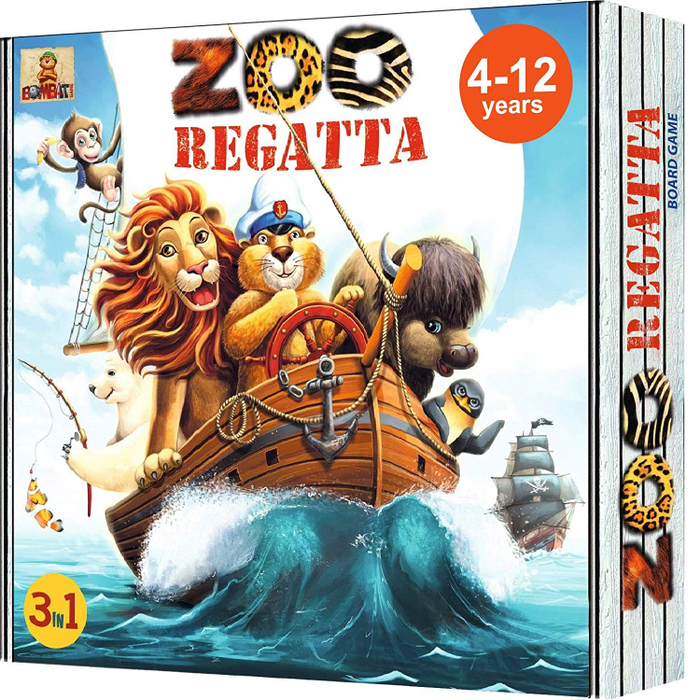 This game is ideal to start introducing young players to the fascinating world of board games. Through the use of a two-sided playing field, customers are offered two games in one box at once.

The first game - "Dangerous Race" - is a competition of captains of sailing boats, seeking to be the first to reach the finish line. The distance that the boat travels in one turn is determined by the roll of the cube. Ships in the game are plastic miniatures, the same as real ones, only small ones.

In the second game - “ZOORegatta” - players are expected by a map of the real world and complete freedom of action. Players themselves lay their route on the map, trying to be the first to travel around the world and return to their home port with a full collection of animals.

ZOORegatta is family oriented, and its rules are designed so that no one leaves the game - everyone will have a chance of success

We added a third scenario to the game - “Grab the Pirate”. In it, several players (pirates) abduct animals, and another player (patrol) catches them.

ZOOregatta is the best geography game in Ukraine 2018.

Will the game be interesting for two girls?

Yes, the board game "ZOOregatta" will be interesting for both girls and boys. Children like to collect animals in the zoo, and explore the map by real ships . The game session of ZOOregatta with girls' participation was always fun and more peaceful, becouse girls use bombs less in the game.

At what age will the game be interesting to the child?

The game will be especially interesting for children aged 5-9 years. However, the upper age limit specified on the box is 12 years. In our practice, we watched incredibly regattas, where 10-12 years children played. Also, the game will be interesting to the parents of children, when they play together.

Models of ships are strong enough?

The ships in the game are sturdy, they are made of ABS plastic (the same material as in the LEGO designers). But if, after all, you damage the ship, then it can be repaired with the help of any glue, this plastic is well glued.

If in the game the ship of another player closed the only passage I wanted to use?

Yes, there are several places in the game in which you can block passage to other players. In this case, you need to look for another way to bypass the blocked cell. This is a very competent tactical move on the part of the opponent, and it is good if you take it into use.

The player has taken my port, and I can not finish the game?

Yes, this is a rare situation, but it occurs if the players are well versed in tactics and strategy. In this situation, you will not be able to finish the game, but you should think about what kind of cage you should take in order to increase your chances of a successful finish in the next turn. Blocking someone else's port is a losing strategy if it's not about hunting for a leader, since it does not bring him closer to his victory, but only creates obstacles to one of his rivals.

What does the inscription 3-in-1 on the box mean, are these three games?

The inscription 3-in-1 on the box means that in the box there are really 3 games. The field in the game is two-sided, and this already guarantees the presence of 2 completely different interesting games: "Dangerous race" and "ZOOregatta". But apart from that, on the map "ZOOregatta" we offer to play another game "Catch the Pirate!", Whose goal is to catch up and catch the other players on the map. This game scenario is aimed at a more adult audience - children 8-12 years old.

We lost the ship, what to do?

Do not worry, replace this ship with a counter / typewriter / button for a while and order on our site a set of 4 ships with colored sails to replace. In the order form, you can even choose the type of ship you need.

Can boys and girls of different ages play together in ZOOregatta?

The game is designed for family leisure. Therefore, the game will be equally interesting to both girls and boys, even if they have a difference in age of several years.