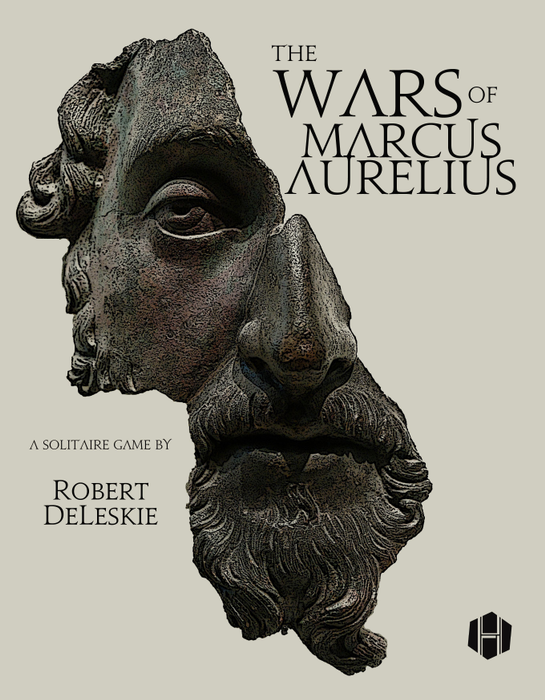 A solitaire, CDG-flavoured, strategic-level game set during the Marcomannic Wars, 170CE-180CE. Playing from the perspective of Emperor Marcus Aurelius, your goal is to defeat and pacify three different tribes while managing off-map wars and rebellions, troop shortages, limited resources, and the effects of plague—all while maintaining your standing with the Senate and people of Rome.

The Marcomannic Wars were a series of conflicts fought by the Romans against a loose coalition of German and Sarmatian tribes along the Danube from 166CE to 180CE. After crushing a Roman army and killing as many as 20,000 Roman soldiers near Carnuntum, German barbarians ravaged the Danube provinces and besieged Aquileia, marking the first time a hostile force had entered Italy in nearly 300 years. Meanwhile, Sarmatians invaded Dacia and Costoboci descended deep into the Balkans and Greece as far as Athens. It took Rome more than a decade to restore peace, with war and plague extracting a terrible cost of human and material resources.

The game covers the war from the disastrous Battle of Carnuntum in 170CE to Marcus Aurelius' death in 180CE. Each turn (lasting one year) is divided into four rounds: early campaign, late campaign, winter and an attrition/house keeping round.

At the start of each round, the player draws three barbarian cards and resolves their effects. Barbarian cards activate enemy tribes (restoring their morale or causing them to advance), trigger off-map conflicts, or cause special events such as plague, mutiny, or rebellions.

On their turn, the Roman player draws a set number of cards (5 during the early campaign, 3 during the late campaign, and 1 during winter) and plays as many or few as they choose for either actions or events. Actions include: attacking barbarian tribes; building forts; moving legions; and increasing "Imperium Points.” Many cards can also be played for historically based events, such as the "Lightning miracle" depicted on the Column of Marcus Aurelius; and the "Galen" event that mitigates the effects of plague. All cards must be used by the end of the year or discarded, except for one card that can be held over into the next year by use of the "Meditations" deck.

Battles are resolved by rolling 1d6 for the Romans and 1d6 for the Barbarians. The Roman role is modified by the number of legions assigned to the front and the combat rating of the leader. Cards can be spend to commit "reserves" to avoid a defeat or eek out a victory. Other cards including "Ambush," "Tactical Superiority" and "Route" can affect the outcome of battles. Enemy die rolls are modified by the morale of the tribe and the terrain, representing the barbarians' knowledge of the lands north of the Danube and Romans' difficulties in maintaining supply lines.

Players can lose in a number of ways: if the Marcomanni break through into Italy the game immediately ends. Suddenly death also occurs if the player's Imperium Points (IP) drop into "usurpation." If all three tribes have not been defeated and pacified by 180CE the game also ends in a loss.

The player wins by driving barbarians back into their home space and defeating them there. Once a tribe is defeated they must be kept pacified by building forts and keeping troops assigned to garrisons, or they may break their treaty and rejoin the fight (as happened historically). Final victory occurs if all three tribes have surrendered. The player's score takes into account the number of years that have elapsed, their IP level, and the number of off-map conflicts they have resolved.