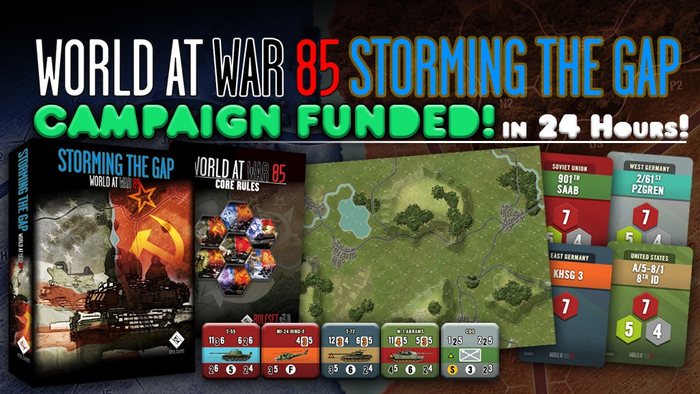 Storming the Gap - World At War 85

STORMING THE GAP is the first volume in the new WORLD AT WAR 85 SERIES, a line of games centered on fast and furious platoon-level combat. Set in an alternate history 1985, the globe is thrust into the maelstrom of World War III when the Warsaw Pact armies storm across the border between East and West Germany in a gamble to seize West Germany, and the whole of Free Europe.

Fight the opening battles of World War III; from desperate delaying actions by US Armored Cavalry and West German Panzergrenadier forces, to determined counterattacks by local ad-hoc armored forces against the might of the Soviet hordes. Strike fast with Soviet Air Assault troops in heliborne ops, securing roadways to allow the massed armor columns of the PACT to sweep westward into Germany.  The devastating armed forces of West Germany, the United States, East Germany, and the Soviet Union are at your disposal in your quest to reshape the world, and history.

The weight of the tactical decisions rest solely on your shoulders. Can NATO slow the Soviet advance with the armor and infantry they can bring to bear?  Or skillfully use Close Air Support and Attack Helicopter units to swing the tide of battle in your favor? Can the PACT slice through into Germany and cross the Rhine river, gateway to the conquest of all of Europe?

The WORLD AT WAR 85 system features a unique combat system that involves die rolls by both attacking units and defending units, which keeps both players engaged throughout the game. Die rolls are compared and hits applied quickly, as all the information you need to fight your units is on the counters. No combat results table is necessary. Initiative, formation activation, random turn length, and close air support are all smoothly integrated.

Twenty unique scenarios are provided in STORMING THE GAP, positing battles that might have been, using 1985 era equipment at PLATOON and BATTERY level. In Iron Horse, Iron Spear, direct the first local counterattack by US Armored Cavalry troops. In Vertical Strike, Soviet Heliborne Air Assault platoons strike hard and fast to pave the way for advancing PACT armor columns. The West Germans launch a desperate counterattack in BundeswehrGegenangriff. East German and Soviet forces attempt to break through hastily collected NATO companies, determined to deny the approaches to the river crossings in The Rhine.

The Formation Activation mechanics are perfectly suited for solitaire play. All unit counters are color-coded, with a corresponding Formation card. When drawn, these cards determine which units are activated on the map, keeping the flow of battle challenging, unknown, and exciting!

To make this the ultimate WWIII platoon tactical level package, we’re including a Battle Generator. Using unit point listings and the game’s geomorphic maps, players can unleash their creativity to design, share, and fight battles that only you can imagine.

It is all here, and YOU are IN COMMAND.

Storming the Gap - World At War 85

Games similar to Storming the Gap - World At War 85