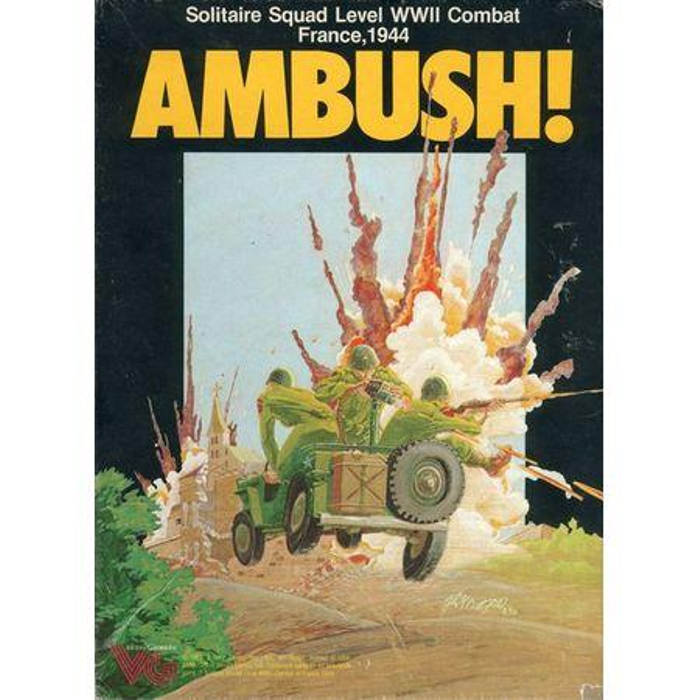 Ambush! is the solitaire game of combat, adventure, and heroism in World War Two France. Using a ground-breaking development of the programmed paragraph solitaire system, Ambush! gives the player control of an American squad, faced with a variety of missions against an ever-changing, hidden German foe.

The variable events, innumerable tactical options, and wealth of unexpected occurrences make Ambush! a solitaire gaming experience unlike any that has gone before. The easily learned rules are specially designed to get the player into the action within minutes.

The player selects and arms his squad, providing each soldier with command and initiative ratings, perception, weapons skill, driving skill, and movement capability. After selecting one of the eight missions provided, the player sends his squad into a mission map to conduct operations called for in the mission. Soldiers move freely, as far as the player wishes, checking for events each time they move...until the sequenced action rounds are triggered by the whine of German bullets!

Ambush! is a man-to-man wargame developed by Avalon Hill. It was released under Avalon's Victory Games label and was developed by Eric Lee Smith and John Butterfield. In 1984, Ambush! won the Origins Award for Best 20th Century Boardgame of 1983. It has been out of print since Avalon Hill was disbanded in 1998.

Ambush! was innovative when it was released in 1983 since it was exclusively designed for single player play. Up to that point, wargames generally required at least two players. This was necessary since a player always had to play and control the opponent. Ambush! solved this problem by having the game scenario itself control the opponent. It accomplished this via tables, charts and a "paragraph book" which the player referred to see how the opponent was reacting.

Having the scenario dictate the actions of the opponent had another advantage: perfectly hiding the enemy. In all previous board based wargames, chits or markers had to be placed on the board representing enemy units. Some chits contained question marks or otherwise hid what was actually on the space, but the opposing player knew where likely areas for the enemy were. With Ambush!, the enemy had no markers on the board at all until they became visible (usually by attacking the player).

One drawback of Ambush!'s design was that it was difficult for players to create their own scenarios. Since each scenario had its own complex set of charts and tables, each cross-referenced to sections in the paragraph book, creating a scenario for the game from scratch could be a daunting undertaking. Players, then, were usually required to purchase Avalon Hill's expansion modules in order to play additional scenarios.

Ambush! could also be played with more than one player, with players playing in different squads or controlling different soldiers.