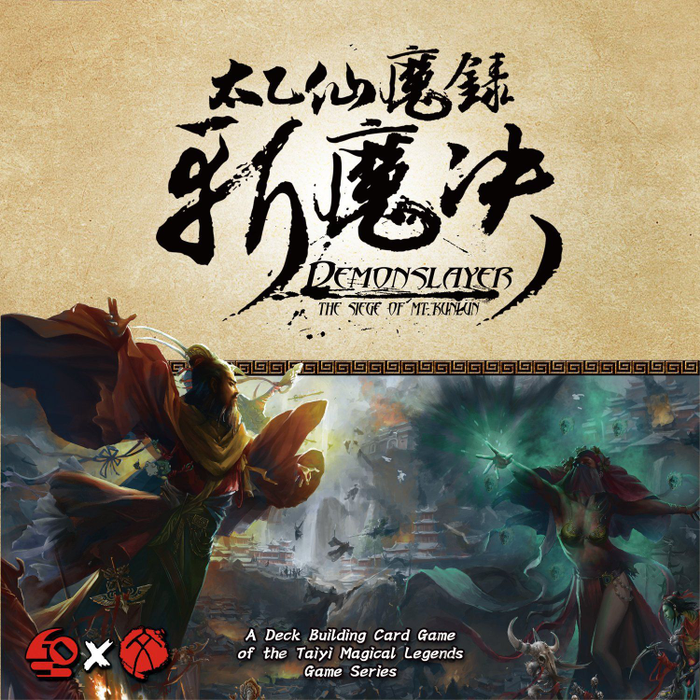 Demonslayer: The Siege of Mt. Kunlun is what is called a 'deck-building game,' for up to four players. The game is based on the story “Warriors of Magic Mountain.” Each player takes control of one Sect of the Kunlun Immortals, and they must compete with each other in defeating the dread forces of the Heart-Eaters. By defeating the Heart-Eaters, each player accumulates Cultivation. At the end of the game, once all the Heart-Eaters are defeated, the player with the most Cultivation is the winner.

Every turn, players play a “hand” of cards, building up the player’s “ready deck” and attacking the demon enemies. In each turn, players can "obtain" a card once, and attack once. Players can obtain spells as well as obtain "meditation" cards which are used to obtain more, stronger cards. Players may also "obtain" Immortal warriors from their Immortal Roster area; Immortals are the foot-soldiers in the war against the Heart-Eaters.

Each turn of the game is strategically important; one wrongly played hand can mean the difference between first and last place.

There are four Sects of Immortals in Demonslayer, and each plays differently from each other. The Kunlun Sect excels at bringing high-powered Immortal warriors out quickly, each building on the other’s strength. The Qicheng sect is good at calling on reserve Immortals to join the battle. The Kongtong Sect is proficient at Alchemy; creating powerful artifacts which help the Sect in it’s battle’s against the Heart Eaters. The noble Wuyi Sect Immortal Warriors sacrifice themselves for devastating combo attacks. Every sect also has 1 Sect Leader Immortal, who provides special powers which serve to define how the sect plays.

The enemy of the game are the “Heart-Eaters;” demonic warriors who have attained immortality by reveling in lustful destruction and excess. Many of the heart eaters have spiritual parasites – called “Miasma” which infect the players after slaying. However, players also sometimes attack “Treasure Beasts” which can grant players special abilities once they are won.

In one "wave" of Demonslayer, there are 8 Heart Eaters and one "Overlord;" a leader of that wave of Heart-Eaters. Demonslayer: Siege of Mt. Kunlun is not, strictly speaking, a game of inter-player competition. Players compete with each other to have the honor of being the most successful at protecting the heavens and Earth from the demon hoards. Yet, players are are essentially cooperating to defeat the enemy.

This English-language version of the game already incorporates one expansion, called The Alchemist's Fortune. In time, we will release new expansions for you to enjoy, incorporating more players, more cards, more options, more strategy, and most of all – more fun.