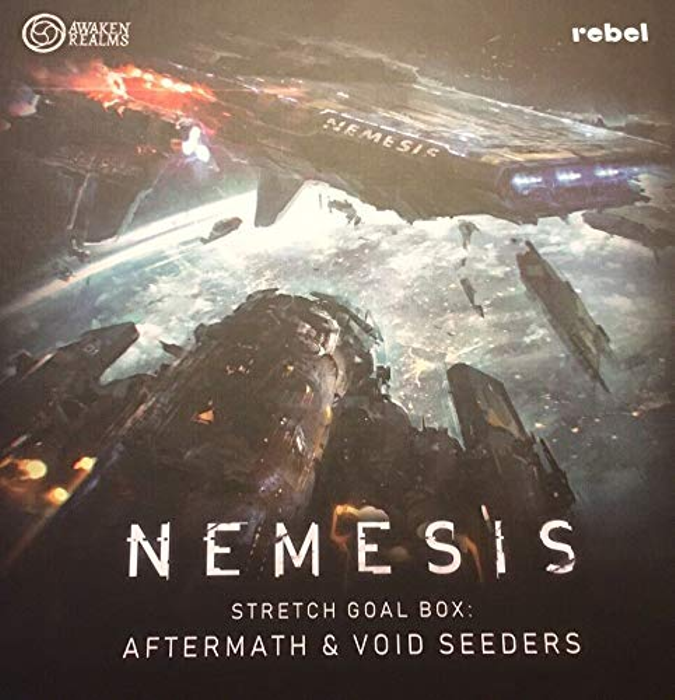 This collection includes the stretch goals and first two expansions of the Nemesis board game.

The crew Wakes up from hibernation. The damage report States there is a critical system failure and the ship cannot continue its cruise. The task to find the damage, repair it and safely return to earth. The problem: one crew member is dead. Somebody ripped open his hibernation pod and pulled his body out. To make matters worse, you can hear noises in the vast corridors of the ship. They sound unlike anything you have heard before. When faced with ultimate horror, will you trust your crewmates?

Aftermath will take place after the events on Nemesis. New crew will come onto the Nemesis ship with the knowledge, that SOMETHING already happened here. Something bad.

Most importantly, this expansion will introduce totally new crew of characters, that we have crafted together. They will be very different from original crew and you can expect a different feel in regards of playing them.

But it will also add a lot of interesting elements. We will have totally different setting - Intruders on board of Nemesis are already evolved and very strong. You will be also able to see different setting of the ship and probably some new rules regarding it. For example since this is after the events on Nemesis, most probably escape pods and the ship itself will not work, so you will need to make your objective, then safely get back on board the ship that you have came in the first place and escape.

We read lot of you asking for additional objectives and we will add totally new 15 hidden objectives in Aftermath. They will be available to use in this expansion and will drastically increase re-playability of the whole game with the combination of totally new characters.

One of the interesting mechanic we intend add is old crew. We will add old crew tokens into Intruder bag and you will be able to meet them during exploration. They might be even alive and possible to interact with in some way (but more often you will find a corpses).

Voidseeders are a race that can interact with the minds of crew members. They will have few nests instead of one, but only one strong fighting presence at given moment. Once killed, new one will be awakened from the most developed nest.

This race will focus on whispering and controlling minds - people that will be near them, will start to listen voices commanding them to do different destructive things.

On the board there is normally 1 Nest as a room token, but there are additionally 2-3 smaller nests. Those are places, where new Voidseeders will born. At the moment of discovering main Nest you should put Stalker miniature in it (this is the model that is on the ship from the beginning. He is very dangerous, especially when faced by people with high Insanity level).

Other Nests will start showing up on the board together with discovering certain Exploration tokens. Those nests will be especially dangerous. They will not move, but if crew member will happen to end the turn at the tile with nest, he will get a serious wound.

They will spawn in nests and they objective will be to spread insanity and trying to move players to Nests.

They will work very similar to Voidlurkers, but with a difference, that they will have the main goal of defending main nest.

He is a main guardian. He takes advantage from fear / insanity of the crew members and will focus on them.

Equivalent of the Queen. Actually, it is hard to say if she is real or if it is a mass hallucination. One way or the other, she will only emerge when all Insanity tokens will be on players (number of tokens will be specific for different numbers of players). She is extremely strong.

Here it will change a little bit - players will normally get contamination card every time they will get insanity token. They will be easier to discard (you don't need to check if it was infected or not). Effect of the card will only take place at the very end of the game and it will be the same as in the normal version - if it will turn out it was indeed "infected" it will mean that your character, even if escaped wend mad and lost the game either way.

This mechanism will change the noise mechanic. Whenever you move (or event card will tell you to), you will need to roll for whispers. If you will get a corridor with an whisper token already in it (you hear something more) - you need to draw a Card from Insanity deck.

Those cards will apply to you or not based on the numbers of insanity tokens your character have. Effects might be very different - from one time action to permanent disabilities.

In combat Voidlukers will only try to add insanity tokens to you and then run away to the closes nest. Whisperers will be harder to kill as well as present some portion of actual physical danger, but their main weapon will be still giving you insanity tokens.

Things will change with Stalker and Despoiler - those two will be huge opponents who will give you real wounds, so you will not want to be near them.

In event phase, one additional step that will be added is checking your insanity tokens and numbers of Voidlurkers and Whisperer in all rooms next to yours. If number of them is higher then the number of insanity tokens - you add one insanity token and draw one contamination card.

But whenever you will be in a room with other people, this effect will be less harmful. (they can help you calm down)

Overall feel we will be going for will be way different from what you will have in base Core Box. We have a lot of cool ideas how to get Insanity cards in a way, that it will be an additional layer of you not trusting your friends - not only because their objective but perhaps because of the Insanity cards.

Additionally, interaction with Voidseeders will be way different, you will need to think very carefully where to move or place your hero not to go insane.