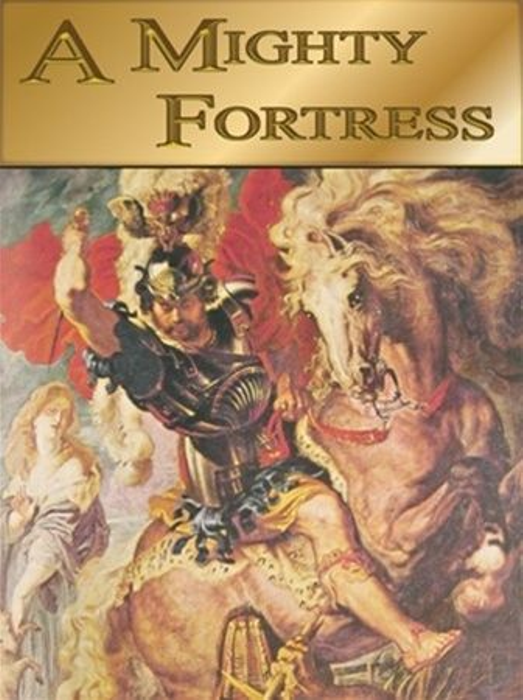 Subtitle of the game: "Reformation and Counter-Reformation, 1532-1555"

One of the games in SPI's Power Politics series.

Recreating the turbulent era of the Reformation, from the viewpoint of political/religious interaction and military activity. A Mighty Fortress is designed with a mechanical simplicity that is matched only by the subtlety of the game's interplay among contesting forces.

A Mighty Fortress simulates the conditions, which made possible the spread of the Lutheran Reformation and the subsequent Catholic reaction (the Counter-Reformation) in the years 1532-1555. The game recreates the actual historical objectives of the major countries in Europe in the Sixteenth Century as well as their military strengths and resources. There are six players in the game representing the six major countries, England, France, the Ottoman Empire, the Hapsburgs, the Pope, and the collection of German states we will call The Lutherans.

The Lutheran player is intent on promoting the Protestant cause throughout Europe, and the Papacy is equally resolved to gather any straying nations back into the Catholic fold. The Hapsburg Empire -- strong in arms and sprawling across half the continent -- seeks to maintain its possessions in the face of pressure from all directions. In England, Henry VIII is engaged with his own confrontation with the Pope; and French forces are marshalling to dismantle the Hapsburg dominions. And Suleiman the Magnificent is constantly watching for the opportunity to expand his Ottoman empire -- at anyone's expense.

The Hapsburgs have, by far, the largest number of combat forces. Unhindered by other problems, they could easily suppress Lutheranism. However, other players have objectives that can usually be achieved only at the expense of the mighty Hapsburgs. Therefore, depending on the rapidly shifting political situation, there will probably be several alliances against Hapsburg influence. Because of this convoluted political situation, the players will often find themselves at cross-purposes with other players whom they were aiding the Game-Turn before. Thus, the possibilities for political and military interaction are extensive.

A Mighty Fortress covers the twenty-four years from 1532 to 1555 -- a period fraught with shifting alliances, political and religious fervor, and frantic efforts to shift the balance of power. Theological debates, treaties of peace, declarations of war, excommunication, taxation, and missionaries -- all are included in this simulation of one of the most violent and implacably hostile eras of European history. The game covers all actions from the year 1532 -- right after formation of the Schmalkaldic League -- until 1555 and the Peace of Augsburg, which guaranteed Lutheranism as a religion [sic] and allowed the German estates to choose between that and Catholicism.

Games similar to A Mighty Fortress