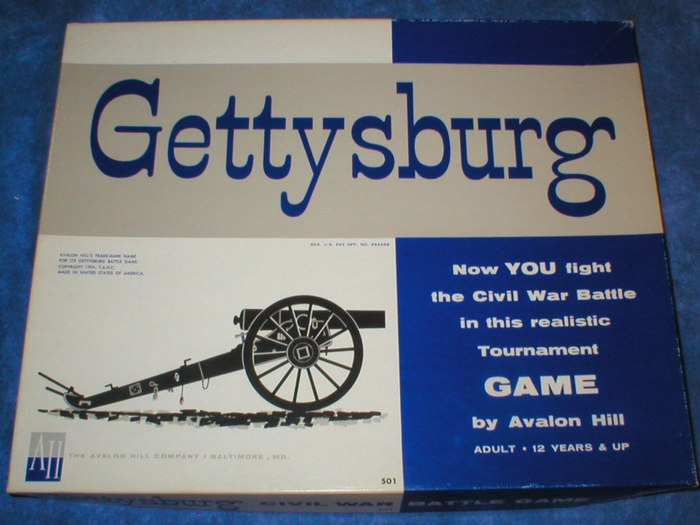 One of the original set of Avalon Hill "Adult Games" that includes U-Boat, Tactics II, Verdict, and Dispatcher.

This is one of the earliest "typical" wargames, with movement/strength counters, order of appearance chart, CRT, etc.

Units include infantry, artillery, cavalry, HQs (but had no use), and outposts (pickets, not in '64 Ed.).

Roberts redesigned this game in 1961 with hexagons. Although it sold out, Roberts wasn't happy with it. He then re-released it in 1964 with squares again, like the 1958 version. However, the rules were significantly changed.

The 1958 version was basically a miniatures game on a map. You used range cards (shown in the illustration) both to move your units and then to check their firing range. Units could rotate on their centers before checking with a range card, which was placed along the front side of the rectangular pieces. You got better odds hitting from a flank. Artillery had double range the of infantry or cavalry (this was only optional as far as I know). There were at least 3 slightly different rule books for the '58, '59, & '60 Ed., all were basically the '58 one.

The game also had optional rules for hidden movement. You left the room while your opponent put his pieces on the board and moved them, recorded their new positions and removed them again! If they came within sight of a unit (including an outpost unit), he had to tell you where they were seen, or leave them on the board if still in sight. Line of sight rules for all this.

The 1964 version required you to keep your units aligned with the square grid rather than the free form miniatures style movement of the 1958 version. This really didn't work well. Units facing diagonally had to be adjacent to form a solid wall of ZOC sqs. to their front and could not therefore protect their flanks if they spread out any at all. This made doubled and tripled attacks easily possible.

Every version would benefit from a road movement bonus rule, x3 at a minimum (but x4 would be better, units that move this fast should not be able to attack that turn, though).

This work is in the public domain. Because it was published in the United States before 1978 and although there was a copyright notice, the copyright was not renewed.