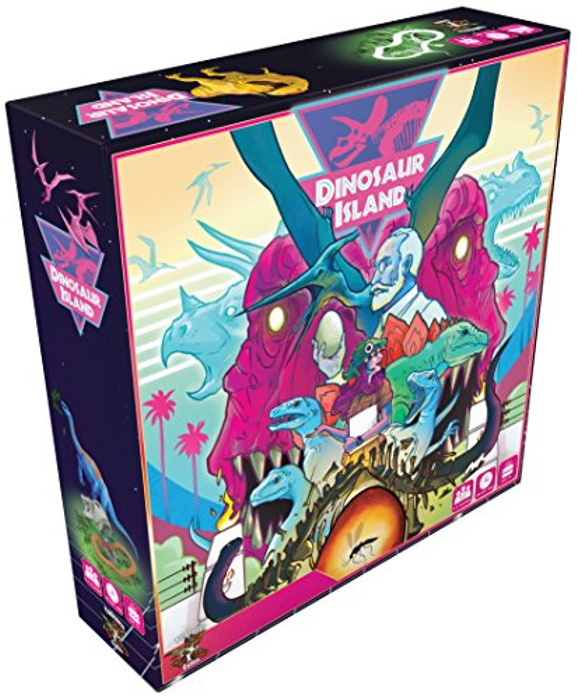 In Dino Island players will compete to create the world's greatest Dinosaur theme park. You'll need to acquire DNA, research the DNA sequences to bring different species of dinosaurs back from extinction, combine your DNA to create these beastly creatures.

Of course, it's 2017 and guests are easily bored. So, you should probably build some roller coasters and shops to keep your guests entertained. Oh, and maybe invest in some security, because if you don't your dinosaurs may escape and eat your guests, and who wants to deal with regulators coming in and telling you your park is a "death trap".

The game uses 10 full-color dice to create the pool of available DNA at the beginning of the round, and features really unique artwork inspired by early 90s graphic design to catch your eye and 3d renderings for the rides. The game contains Dino-meeples, double thick cardboard with cut outs to keep tracking cubes from sliding when the table is bumped, and two unique mechanisms that we are really fond of.

The game-length is variable from 60 minutes to 2.5 hours regardless of player count simply by adjusting the number of "end-game" cards used. The game also features "plot twist" cards that change certain game rules each time you play for endless replay-ability. No two games will ever be the same!

The game is a mid-weight strategic worker-placement game with strong thematic integration with the mechanics. We've found the games complexity to be a bit lighter while maintaining tense decisions. This was accomplished by breaking various actions into 4 unique phases so that order of operation is less critical to your success allowing new players to grasp the flow of the game quicker.

My Top 5 Games I wanted to love but don't

Sometimes someone describes a game to you and it sounds amazing, you are all psyched up to play it and then it just falls a little flat, this is not necessarily a list of games I think are bad, just that they weren't as good as I was hoping:

5) #Hyperborea - when one of my game club pulled this out and started explaining I was pretty excited: a bag building-worker placement hybrid with area control and engine building thrown in for good measure. Each faction had a slight assymmetry and there were multiple routes to scoring VP, it sounded like a great experience. However, this was definitely a lesson for me in 'less is more': While all of the ideas in this game were good, and all of them were well executed, none of them were brilliantly executed, no one aspect of the game really sang to me. It was all okay, and while I had a good time with it, it's not a game I am desperate to play again. I am not arrogant enough to say how this problem could be fixed and I think there is some great design hidden in this game, but under just too many layers.

4) #Photosynthesis - I really loved the sound of this game, it had a novel theme and the mechanics were seemingly integrated beautifully into that theme. The sun moving around the board with taller trees blocking smaller ones was excellent and easy to keep track of. However, while I think all this design is smart and elegant, something just didn't quite work for me about it. I think there felt like wasn't a tonne of progression and while it was an enjoyable puzzle it didn't feel particularly satisfying. That said the art design and the little cardboard trees are gorgeous.

3) #Star Wars: Outer Rim - One of talked about a fair bit on this site. I really like Star Wars as a them, I think it is a wonderful universe to explore and was pretty excited about a game happening on the periphery of this huge galactic conflict. That you were living  in the rough and tumble on the edge of the galaxy. However, this game, while being an enjoyable puzzle never really made me feel like I was living dangerously, it was all very calculated and the missions seemed to just be, go here, roll some dice, maybe get some money/points without and real flavour to them. I think maybe with a different theme or expectations I might have enjoyed it more. I was ready to be Boba Fet or Greedo and just never really felt it. May need to play it more as I think it is a well put together game.

2) #Dinosaur Island - Dang, do I love the theme and artwork of this game, getting to create and run a dinopark, and the dino meeples are adorable. However, fo a game about dinosaurs it really didn't feel too dinosaury. 3/4 of the sections of the game could be reskinned to almost any other theme without issue. The actual placing and managing of the dinosaurs (and occaisionally eating customers) was fun in principle but boiled down to just matching two numbers with relatively minor consequences for rampaging dinosaurs. Overall, while none of it was bad, it just didn't really pop in any way.

1) #Marvel Champions: The Card Game - I was really keen to play this when a friend told me his copy had arrived (I even passed up trying out Dune at our games club to give it a go) and from the description thought it sounded great. However, it never really clicked in any way for me. I appreciated them trying to mix up how the heroes worked to add variety but it all just felt a little too mechanical and I never got the feeling that I was a super hero battling some villian bent on destruction. It quickly became a focus on numbers and the actions and characters faded into the background. That may very well just be my issue (which seems to be the case) but I do love trying to get into the narrative/story of the game and this just didn't scratch that itch. Also, the ending felt very anticlimactic, we all calculated our max damage and upon realising that we could do enough, just did that and won. There was no tension or even a feeling of triumph. So not a bad game, but not one I would invest in.

Again, while I don't think any of these games are bad as such, and some of them I should probably play more before disparaging them, they are games that filled me with excitement and were then just mostly okay. Would love to hear other opinions about them or games that didn't measure up for you

Dinosaur Island Review - Hold on to Your Butts

Dinosaur Island, a game about managing a dinosaur amusement park, thunders its way onto shelves. Is it worth the price of entry? Sink your teeth in our review of Dinosaur Island to find out!...

The seller posted it for $35. Local pickup or $10.99 for shipping. Seemed like a great deal if anyone lives nearby Bakersfield, CA.

Who's Played Dinosaur Island? Did it fall flat? I've been hearing reviews of the game having very cool theme and art but falling short when it actually comes to gameplay. Has anyone else noticed this?

Rule Your Own 'Dinosaur Island' - GeekDad

After some initial problems—should I call them T. wrecks?—dinosaur theme parks have significantly improved. Sure, there's still the occasional escaped dinosaur that eats a patron, but everyone signs ...

"We were so busy thinking about if we could, we didn't bother to think about if we should." We posted this on Twitter and Instagram the other day. It is a quote from a movie you may have heard of, Ju...