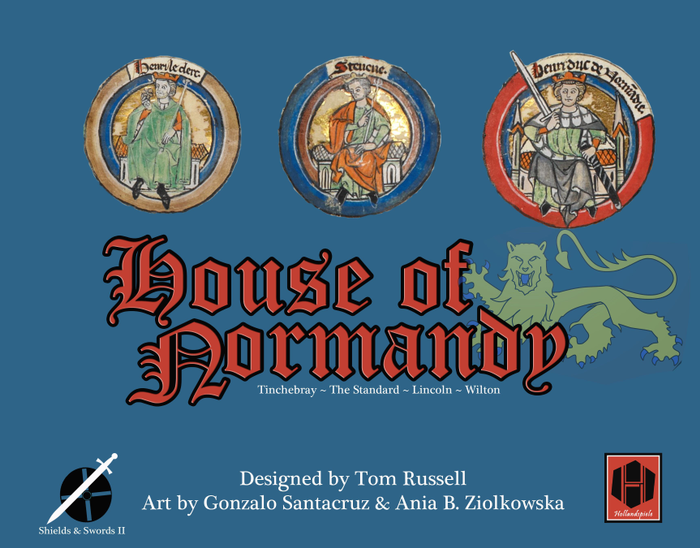 House of Normandy is a "quad" centered on the dynastic struggles of William the Conqueror's extended family, and the second game in the SHIELDS & SWORDS II series. The earliest of the four battles collected herein saw two of William's sons duking it out. The other three battles are all drawn from the reign of Stephen of Blois, the Conqueror's grandson, and the long period of instability and intermittent civil war that has come to be called The Anarchy. During the twelfth century, armies tended to avoid giving battle to one another, and when it did come to blows, neither side exhibited much endurance; there's none of that "they fought from sunrise to sunset" stuff here. Nor was anyone involved particularly renown for any special military genius. As a result, the battles here are short, small, and uncomplicated affairs, ideal both for solitaire study, and for a quick game with a friend. That's not to say the battles are lacking in flavor, however, as each brings something unique to your table.

The Battle of Tinchebray (1106) gives each player Wings composed of both cavalry and foot soldiers, and arrayed in echelons. S & S vets know that horse and non-horse units don't support the other's attacks, which makes things tricky. The battle turns on the timely (or not) arrival of a hidden English Wing.

The Battle of the Standard (1138) is a matter of English quality versus Scots quantity. The English have a good defensive position, and are mostly arrayed into a single Wing (with all the pluses and minuses that come with it). Successive waves of Scots will usually be forced to attack the English piecemeal. The English have the advantage in the early game, but the longer the game runs, the more Scottish numerical superiority will rule the day. To recreate the spectacularly lopsided victory that the English enjoyed historically, the English player will have to seal the deal in the early going.

The Battle of Lincoln (1141) might be described as a game of "press your luck" for poor King Stephen. He has some good units, but as soon as one Wing defects, the others might follow, turning an even contest into a slaughter. His Angevin opponent must make good use of not only his horse, but also his Welsh infantry, which is fearsome but brittle.

The Battle of Wilton (1143) commences at dusk, and ends at nightfall. This means the battle has a time pressure element, quite unusual for the S&S system. Neither player knows exactly when the battle is going to end. Will the Blesevins break through the Angevin line, or will Stephen's retreat be covered by his gallant rearguard?

The SHIELDS & SWORDS II series builds on, and improves, the Shields & Swords series of games (We Happy Few, Stamford Bridge, A Hill Near Hastings, and Our Royal Bones), with a greater variety of unit types, revised suppression rules, and a new D8-based CRT. S&S II revolves around the activation of Wings using double-sided Command Markers, with a flexible scale and simple, easy-to-teach rules.

Games similar to House of Normandy