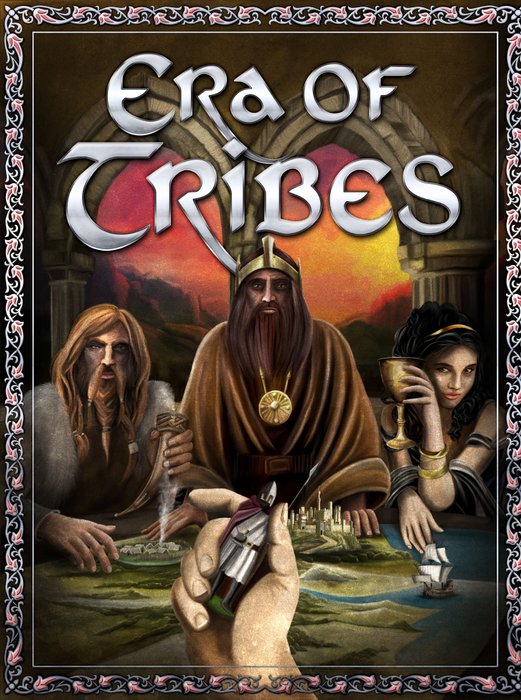 "Era of Tribes" is a 4X civilisation workerplacement strategy game for 2-4 players from 14 years+, where your goal is to develop, expand, discover, and interact with your fellow players in Europe from the Neolithic period to the High Middle Ages.


Europe at start of Neolithic period. The human population is scattered all over the continent, living in dark and humid caves. You represent the clan chief of a dynasty, and your one goal is to become the ruler of a vast empire.
However, realizing this goal will be an arduous journey. Your subordinates will have to faithfully strengthen you, and your armies will have to be more advanced and stronger than those of your enemies. You will have to conquer areas and develop colonies to receive resources and luxury goods. You will have to skillfully maneuver on a political level and use scientific progresses to its maximum value. If you are successful, you will become the supreme ruler of the known world.
Objective of the Game:
Your objective is to get the most Influence Points (IP) by the end of the game. To reach this goal, you have to develop your empire with the help of your leaders. Take turns placing them in the different chambers of your palace, where they can help you in different and unique ways:
The "Expansion" chamber allows you to spread your vassals, found cities, collect luxury goods or resources, and decide conflicts.
The "Commercial” chamber allows you to increase your wealth by trade.
The "Taxation" chamber allows you to levy taxes in your cities.
The "Diplomacy" chamber allows you to negotiate with your neighbors, raise your influence with them, and either change the play order or acquire additional aristocrats.
The "Progress" chamber allows you to discover new improvements that enable you to construct more cities, improve your strength, gain more influence, raise the moral of your population, enhance the effectiveness of your farmers, execute navigation, or improve your trade.
The "Bread & Circuses" chamber allows you, in combination with luxury goods, to increase the morale of your people.
Finally a "Revolution" allows you to ascend into the next higher epoch if you meet the requirements.
The additional rooms "Faith" and "Intelligence" allow direct actions against your opponents.
You gain influence by taking different actions during play, and by Influence Cards which are distributed secretly at start of the game. These cards will be evaluated at the end of the game and will add additional influence if you have fulfilled their conditions. Furthermore, there are some aspects which will give you additional Influence Points after finishing the game. Again, the player with most IPs will win the game.
There are several end of game conditions. Amassing wealth, holding many provinces, reaching the ancient times, developing the most advances, conquering an opponents main territories, gaining a certain amount of IP, and meeting your influence marker with your triumphant march.
The game is for up to 4 players, with ten different unique tribes you can choose from. It takes about 30 minutes per player in the normal game, and 60 minutes in the long game (higher game end conditions).

Games similar to Era of Tribes