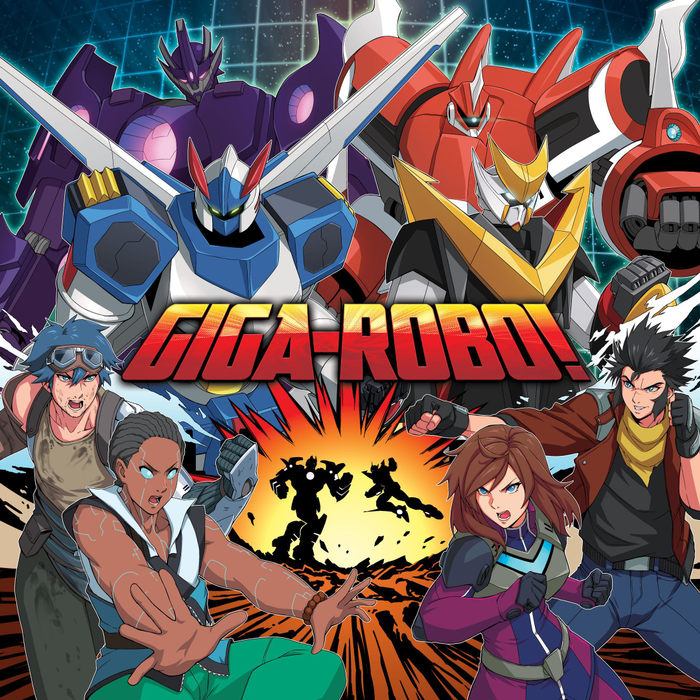 Giga-Robo is the card-driven miniatures game of giant robot combat! Fight to the finish using custom-built hands of cards, combining powerful attacks, clever tactics, and epic finishing moves. Take command of one of four unique robots, pair it with your favorite pilot, and smash your opponents across a fully destructible city.

DEEP CUSTOMIZATION AND STRATEGY
Choose from a powerful roster of pilots and robots, each with unique stats, styles, and alternative forms, to create a wide variety of play styles. Each Pilot and Robot has its own deck of Attack and Instant cards. Choose 15 of them to build your hand. Customize your robot by installing 3 abilities that can be used and triggered mid-game to turn the tide of battle. Select a new hand each game, or swap out your Pilot or Robot for a whole new set of possibilities, ensuring great replayability, personalization, and strategic variation.

DYNAMIC DICE AND CARD COMBAT
Roll fistfuls of dice against your opponent for over-the-top card-based attacks, powered by your Pilot's Fighting Spirit, and balanced by map position, strategic card play, and hand construction. You never draw cards from a deck, so the combos and combat cycles you design are always at your fingertips. Every time your opponent moves, plays a card, or resolves a dice roll, you can respond and counter with cards of your own. The battle is constant, dramatic, and engaging—you never have to wait for your turn to get in on the action.

COLLATERAL DAMAGE
Every piece of terrain is fully destructible, revealing new hazards as you smash through the city. Use an exposed conduit from the city's power grid to charge your next attack. Throw your opponent through a skyscraper, leaving a blazing inferno in its wake. Strike the ground beneath your opponent’s feet, sending them crashing down into a massive crater. Combat is never static—your attacks push, pull, and throw your opponent across the map and through every hazard you can find.

DOWN BUT NEVER OUT
Every time your opponent inflicts damage to your robot, you gain resources based on your Pilot’s Rage and Power, giving way to stunning comeback moves and ever-shifting momentum.

THE COOLDOWN METER
Timing is essential; every time you play a card, it enters your Cooldown Meter and you won’t be able to use it again for a set number of turns. Some cards have powerful buffs that Activate once they’re in Cooldown. The Cooldown Meter also controls how long you’re hindered by the negative effects of Trauma Tokens—components that show the consequences of your opponent's most devastating attacks, and the effects of pushing your robot beyond its limits.