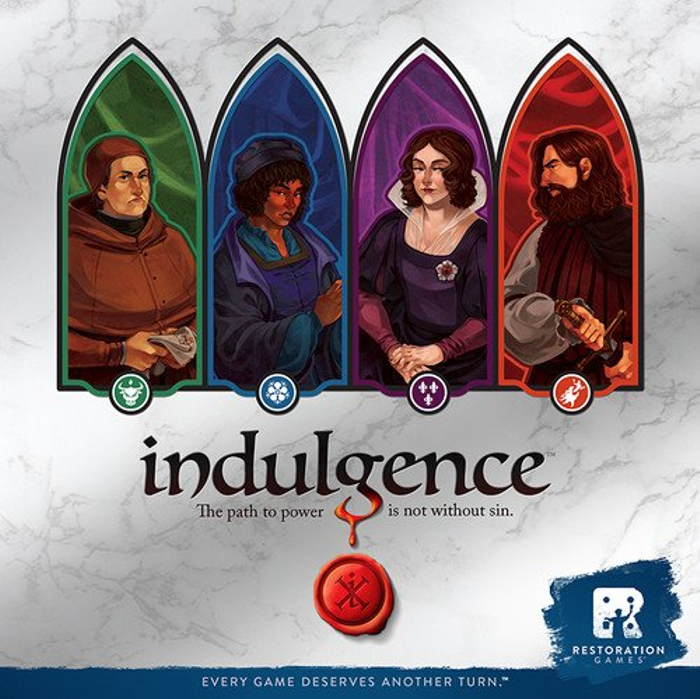 Mechanics:
Categories:
In the teachings of the Catholic Church, an indulgence was a way to absolve yourself of venial sin. In some cases, this might be by doing good works or engaging in meaningful prayer. But in the darkest of times, indulgences were sold to anyone willing to make a significant "contribution". As the rising families of the Italian Renaissance conspired and plotted to seize control, the indulgence offered a clear conscience for many a questionable deed committed in the name of power.

Indulgence is a trick-taking game for 3-4 players, featuring the stellar artwork of Chelsea Harper. On their turn, players choose an edict that gives the rule for the hand. The other players then decide if they want to violate the edict by doing the opposite of what it commands. So, "Don't take any Medicis" suddenly becomes "I must take all the Medicis". Committing a sin can be challenging, but a player attempting it gets the benefit of the indulgence, a large token that turns one of their cards into a winning hand. Can you trick your opponents into committing sins without the indulgence? Can you avoid sinning yourself? Whoever can pull that off will end up with a pile of florins and the title of victor.

In 1981, Milton Bradley published Dragonmaster, designed by Jerry D'Arcey. It was itself a reimagining of D'Arcey's prior game, Coup d'Etat, and its classic progenitor, Barbu. Dragonmaster enjoyed lavish production, with oversized cards, art by the incomparable Bob Pepper, and some nifty interlocking gems for keeping score. (Mike Gray tells us the interlocking gems were designed to avoid losing bits if you were playing around a campfire.)

In approaching this restoration, we decided first to retheme. The field of fantasy card games has gotten a bit crowded over the years. So we decided to go with the Italian Renaissance, which offered intrigue and a whole deck's worth of colorful characters. We knew we had to keep up the standards for the components. So, while we don't expect people to play around a campfire much these days, the custom metal coins offer just the right heft and feel oh so nice as you're stacking your spoils. We scouted for a top-notch artist and kept the tarot-sized cards to show it off. Finally, we had to even out the game play. The original game suffered from a runaway leader problem, where an early power play with the dragon card all but assured one player's elimination from contention and gave the other a big leg up. We tweaked the dragon card-now the Indulgence token-to make it more accessible, less powerful, and easier to understand. Since the variable contracts were such a big part of the fun, we decided to ramp that up with even more options and a more interesting method of meting them out, adding another layer of strategy. Finally, we upped the deck to 36 cards to increase strategic depth and even out the hands between 3- and 4-player games.