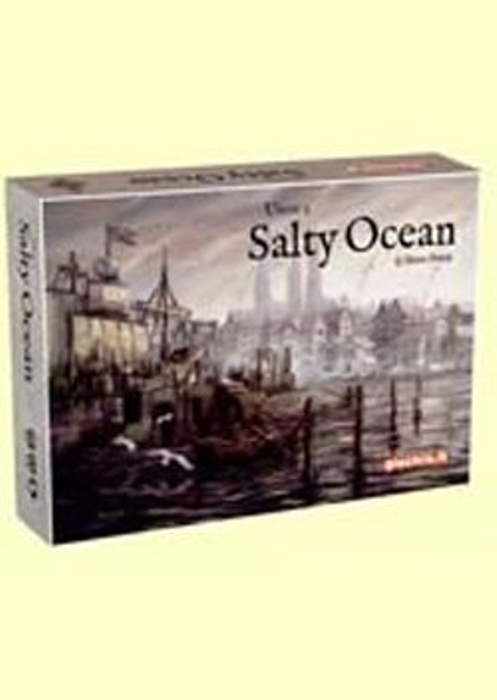 Upon a Salty Ocean

At the beginning of the 16th century, the city of Rouen is the main French port. The city's wealth depends on fishing and the trading of salted fish. Salt produced in the mines has to be loaded onto ships and used to preserve herring and cod fished in the Atlantic Ocean. Every week ships full of salt barrels leave Rouen for the fishing grounds of the Atlantic Ocean, and once back, the goods are sold in the city markets. The players represent city merchants, and they invest in ships and city buildings to try to get rich. Who will be the richest merchant of Rouen, when Francis I, King of France, comes to visit the City?

In Upon a Salty Ocean, players start the game with one caravel loaded with three salt barrels, a salt mine and 10-16 money. From this, they must build a shipping empire! The game lasts five turns, with each turn being divided into three phases.

In the event phase, players adjust prices on the market based on the current event tile, take into the account the weather and environmental conditions that will affect them the remainder of the round, and reveal the event tile for the subsequent round.

The action phase lasts a variable number of rounds depending on how many actions players want to take and can afford. Eight actions are available and they're divided into four types:

On a player's turn, he can take any one of the either actions or pass; the cost of an action is the number of times this type of action has been performed previously during this round. For example, the first use of a City action costs 0, while the next use (whether to buy a saline or a building) costs 1. A player who passes can take an action later in the same phase. The action phase ends once all players pass. A player can go into debt during a turn, paying one coin in interest when doing so; as long as the player is in the black once the action round ends (by selling to the market), no further payment is due.

In the turn end phase, players produce salt, may use special buildings, pay interest (if needed), reset the cost of the actions to zero, and so on. A player can have no more than 40 coins at the end of a turn unless he owns a banque, and the limit is 80 coins without owning Salle des Coffres. This limit is important as the player with the most coins after five rounds wins. Some buildings provide endgame bonuses to which the coin limit doesn't apply.

Upon a Salty Ocean

Games similar to Upon a Salty Ocean