Board Games by Skybound Games

These are the board games published by Skybound Games.

by Gwido Idziak | updated 4 days ago

The long wait for Wonderland’s War is finally over. The campaign for the newest game by Druid City Games and Skybound Games launches next Tuesday. The game takes us to a world known from the books by Lewis Carroll, except it’s darker, more insane and filled with chaos.

Each game of Wonderland’s War starts in an innocent manner. Players sit together and enjoy their tea at Mad Hatter’s well known place. Despite that, each of them is actually gathering forces, plotting and planning their future moves in an upcoming war against each other. When the party is over the actual war begins....

I was a KS backer. As far as I know the pubs do not even know I am reviewing this game. If you would

by Hungry Gamer | updated 4 days ago

Before I begin, nothing. I was a KS backer. As far as I know the pubs do not even know I am reviewing this game. If you would prefer to watch a video of this review you can check it out below. Get your own copy here.

This does not mean that Minions of Mordak did not come with some stress for me! After all, there are two types of games that I generally dislike: semi-coop, and 1 vs many games. I often just find that they engender bad feelings with a lot of groups, people get irritated or angry. So though I could not resist backing cause of the art and theme…I brought it to the table with only a moderate excitement. Let’s not talk about the stupidity of backing a game, and waiting two years for it, and not actually being excited to try it.

So, sadly the good king of the realm has passed. Luckily, the right hand of the king, Mordak, is there to help. He is ready to usher the realm into a new era of joy. He kindly informs everyone that he will be going on a short vacation to gather his thoughts in the realm of uncaring darkness, and he will be back in a few days with some great ideas to help make the transition smooth and simply.

Unfortunately, the local heroes, Order without Borders, have decided that it is time for them to seize power and set off on a journey to take over for themselves and the true and noble Mordak must rely on his faithful patriots to defend the land until his return. At least that is one interpretation…

In any event, the heroes will spend the beginning of the game moving around the map revealing tiles, battling minions, finding treasure and leveling up. The core of the game revolves around dice. All characters have a different dice set for each ability in the game: melee, ranged, magic, and Mordak has corruption. When you take these actions you will roll the dice and the resulting number of hits correlates to the damage you do with the former two abilities, and for the latter two gives you the ability to choose what spells you want to cast, or what kind of minion you want to summon.

After six rounds, or the discovery of three shrines, Mordak will appear in a blaze of glory…accidentally permanently damaging the castle…and it is a battle to the death. Either Mordak will take out three heroes, or the heroes will show that they are true bullies and beat Mordak to a squishy green paste. Scrut the Barbarian, thinks it looks like guacamole.

The art, and comedy of the game is just wonderful. It makes me smile every time I look at it. Also, as is the usual with Skybound Games the production on the game is very good…I am kind of sad I did not get the minis…I did not particularly want most of the deluxe stuff, but now I am regretting not getting the minis. Now, the reason I am slightly regretting not getting the minis is because I think this is the best theme realization of all the Skybound Games that I have played. The theme truly feels ingrained in this one.

I really appreciate the ease of play with this game. It is very simple to manage, and teach. It allows you to play the game, but also remain engaged with the people around the table, and play your character a bit if you like. The last time I played some of the best parts of it were voicing our characters around the table. This game does a wonderful job of facilitating that kind of environment.

While this game does not answer all my fears with table dynamics in a 1 vs many game, it does answer many of them. The game never felt like it was getting mean, which is odd because the heroes were absolutely beating up my poor minions, and I was absolutely trying my best to kill them dead, yet because the theme is so well realized that it always felt silly to me.

The biggest challenge I think this game has is that it really needs a high player count to really be at its best. Yes, it is fairly easy to play multiple heroes as a single player to up the hero count, but I think the joy is having multiple people around the table making plans together, and interacting. This does mean that the game will hit the table a bit less than you might want. The other side of the coin is that while so many games nowadays are coming with solo modes, this one does not have one. Yes that is a bit at odds with my belief that more players is better for this game, but it does seem a shame there is not a solo AI to run the heroes or Mordak. Hopefully someone will create one.

Minions of Mordak has the best thematic realization of any Skybound Game that I have played. The art is delightfully tongue in cheek, and all the flavor text really goes a long way to create a game that is a delightfully zany adventurous romp. The game mechanics are incredibly simple, but with some wonderfully satisfying dice chucking fun. The game is a 1 vs many game, which does come with its own challenges for many game groups, though I feel this one does a good job of mitigating many of those with its silliness, and speed of play. The game plays best at higher player counts, and on the other side of the coin, it is a shame that there is no AI to allow for solo play, or adding bots to a smaller player count game. Along with Sorcerer City I think this is one of the best games Skybound has to offer.

Mordak is coming get to the point!

* Very well realized theme
* Great art, good production
* Does a good job of eliminating some of the table dynamic issues of many 1 vs many games
* Simple mechanics that are easy to learn, yet has lots of interesting choices to play with
* Plays best with 4-5 players, unless someone is going to control a lot of heroes
* Shame there is no AI
* A fun game that will absolutely hit my table again 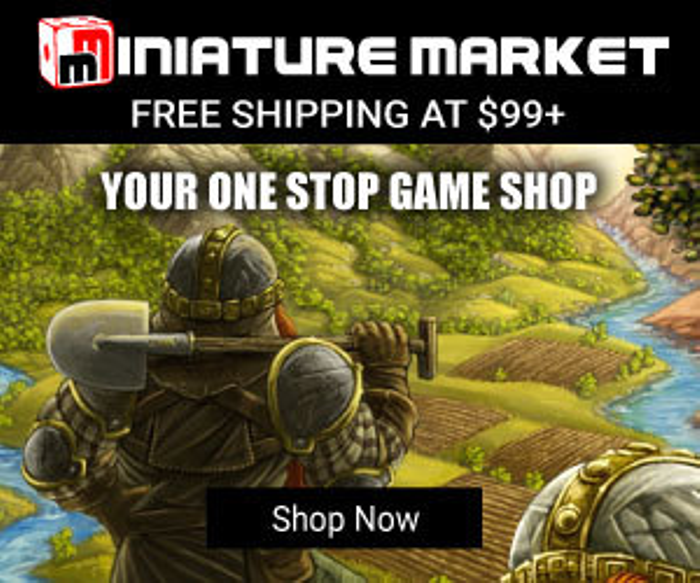 Your One Stop Game Shop