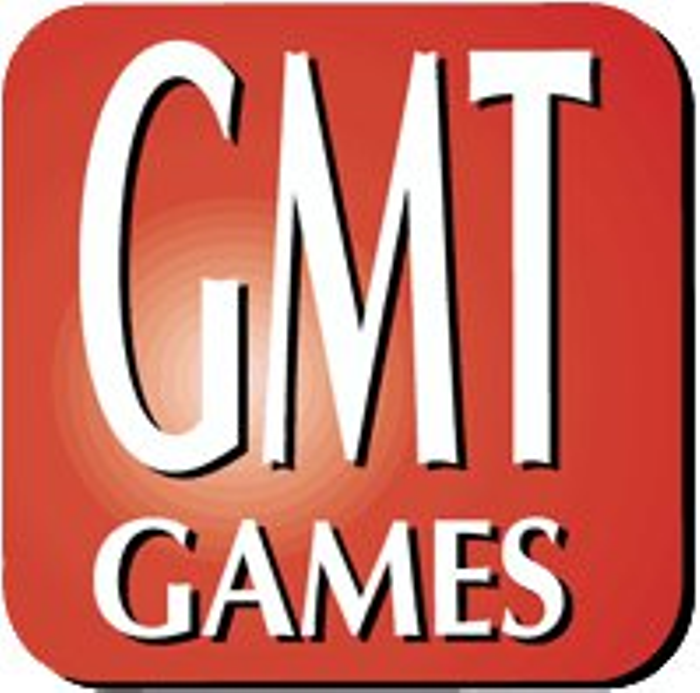 Board Games by GMT Games

GMT Games is now in its 28th year of creating and publishing a broad line of Wargames, Strategy games, Eurogames, and Family games. Although headquartered in Hanford, California, GMT is a 21st century "virtual company," with management, creative talent, and art and design teams spread all over the world, connected via the internet. Almost all of our day-to-day interaction between team members and with our customers occurs online.

1 | 0 comments | [+]
In the July 2018 Monthly Update from GMT Games came an announcement for a “new space game that we mostly know how to play” called Expansion or Extinction: A Triumph & Tragedy Series...
See Comments 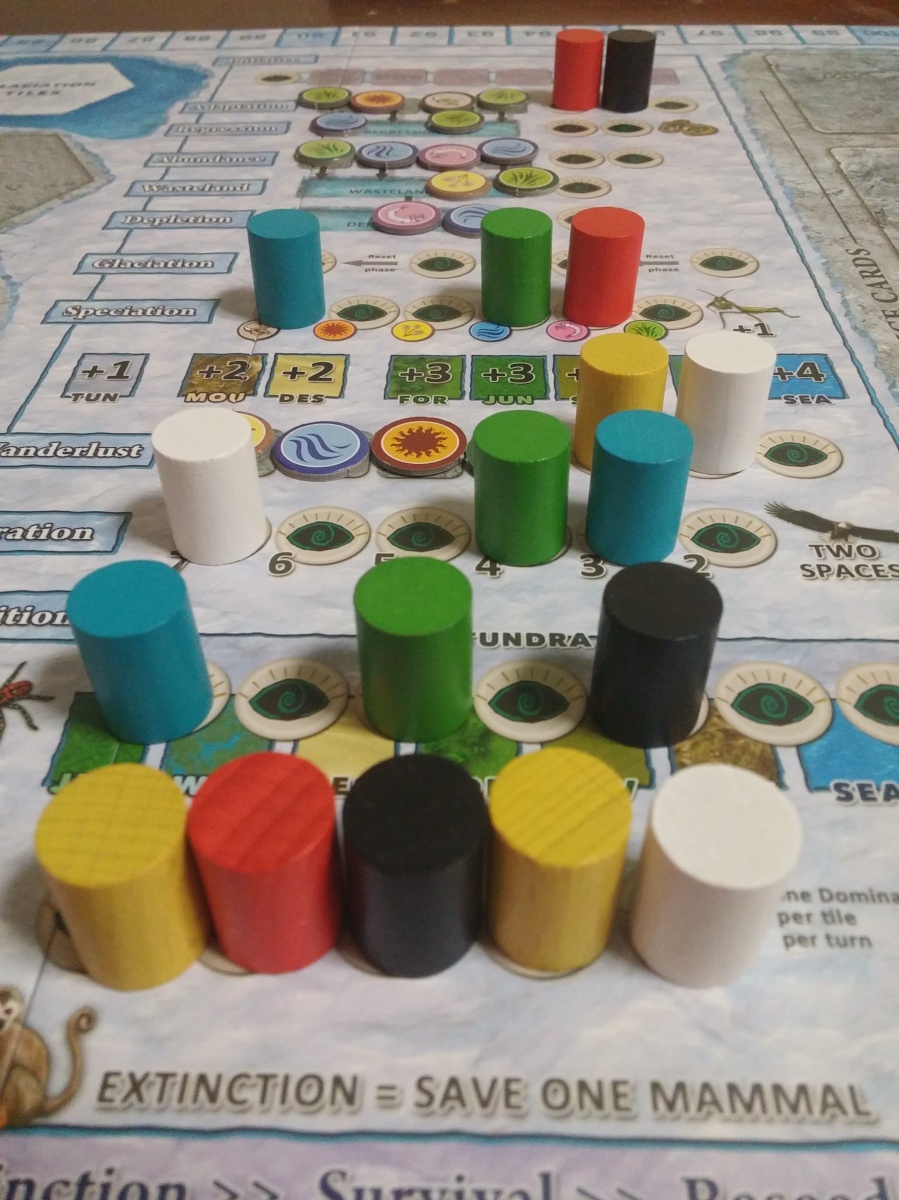 0 | 0 comments | [+]
Dominant Species was one of the first 10 board games that I bought when I was introduced to this hobby by Grant and Alexander, a little over a year ago now.  One of my favorite themes in any game i...
See Comments 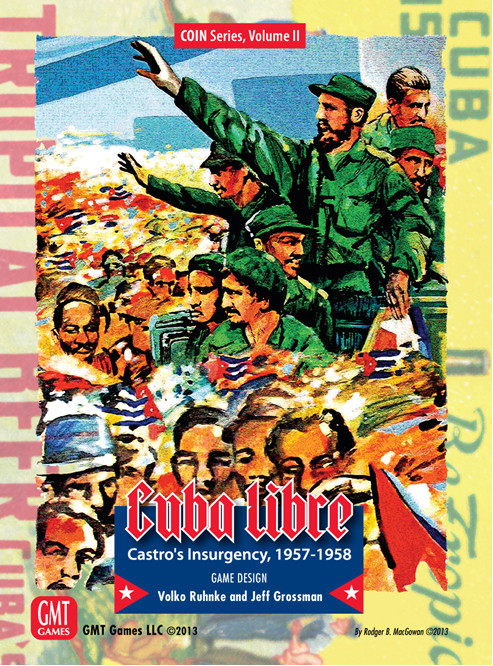 Today’s review is about Cuba Libre, the second title from the Gmt Games’ COIN series, designed by Vo…

0 | 0 comments | [+]
Today’s review is about Cuba Libre, the second title from the Gmt Games’ COIN series, designed by Volko Ruhnke and Jeff Grossman. The game takes place in 1956, during the Fidel Castro’s Insurgency in...
See Comments

Instead I thought I would write a high level general overview of the COIN series from GMT games.  I'm not an expert at the games but I have bit of experience and a growing collection:

(Also note, I had a bunch of mid-game photos from all the games in my collection but I lost them somehow.  So I setup a couple of shots just to give you an idea of what things look like.) 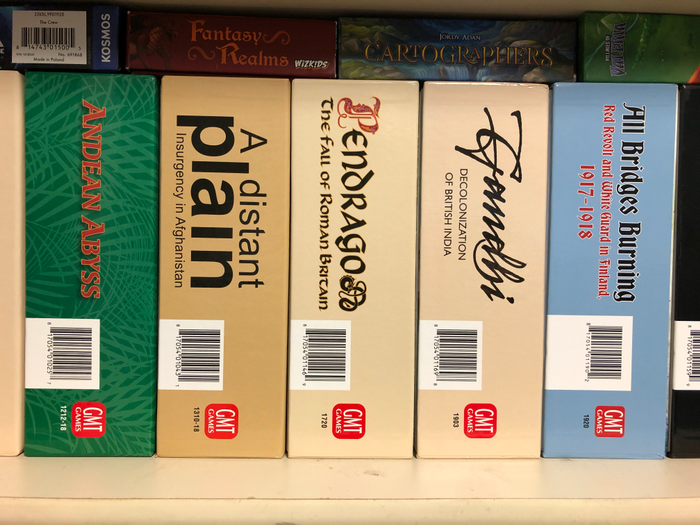 The COIN (COunter INsurgency) series is published by GMT.  They cover a wide range of conflicts such as the Cuban Revolution, the impact of the fall of the roman empire in the English Isle, the recent War in Afghanistan, and the decolonization of India.

Some common points among all the games: 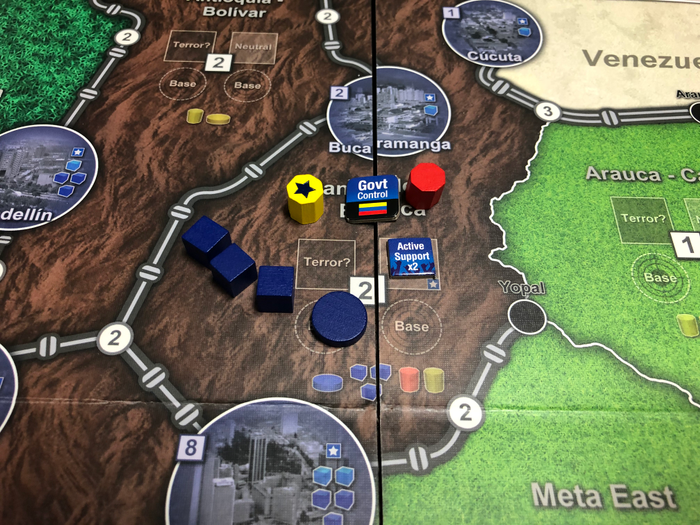 The government has 4 pieces to 2 for all other factions and therefore has control.

How does a Turn work?

At the start of the game and on every turn there will be an event card for the turn and also one shown for the next turn. 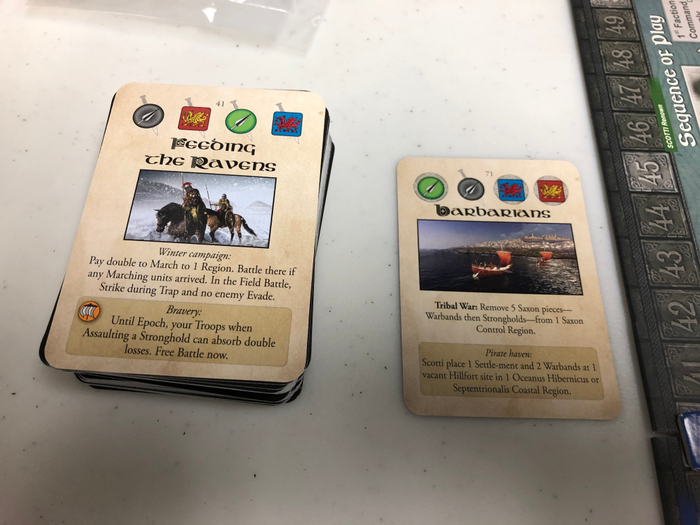 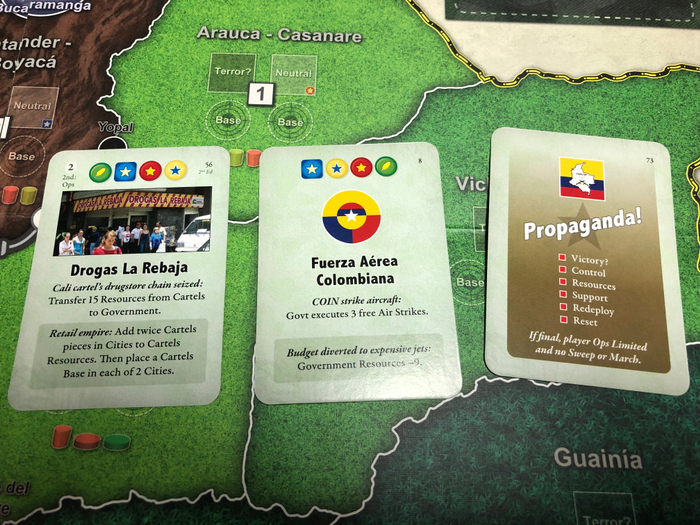 At the top of each card you will find faction symbols.  Eligible factions in symbol order determine their action:

Any faction that takes an action or activates the event will be ineligible on the next card.  (For most of the COIN games.)

This interplay is the real core of the game.

If you take the operation only does the next player pass because they are up first on the next card?  Or do they have a really juicy limited operation lined up now that they should just take? 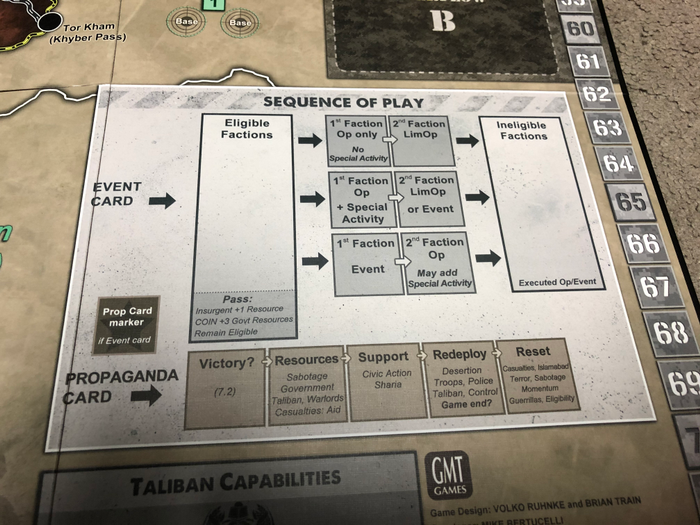 The typical sequence of play on the board.

Play continues until a propaganda card comes up.  They typically shuffled in to the event deck at points.  You can have an idea when they will come up but can never be sure.

At that point victory is checked for, resources are gained by factions, and a variety of other updates/actions occur depending on the game.

The propaganda phases are a vital part of the game and if you get yourself in to a good position to take advantage of them you can get a big leg up towards victory.  Each game has it's own flavour of actions but an example for many games is you can take actions like creating support or opposition in provinces where you meet certain criteria.  It doesn't use a turn or make you inelligible, you've typically just got an influx of resources, and you can often do it in more spaces than is typical.  (But of course if you use all of those resources now you won't have them for the next campaign and they can be tough to come by.)

If the last propaganda card comes up and no faction hits their victory condition then the faction closest to it is the winner! 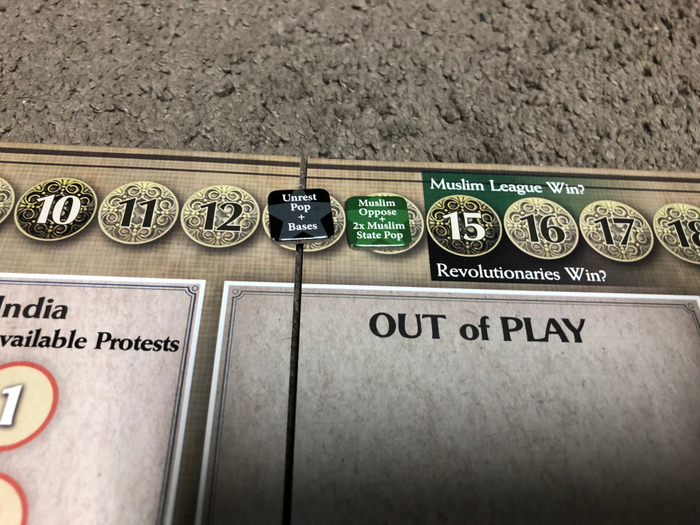 In Gandhi if the population in unrest plus bases is 15 or more during a victory check then the revolutionary guerillas win, if the muslim opposition plus double the population in muslim states is more than 15 the Muslim league wins. 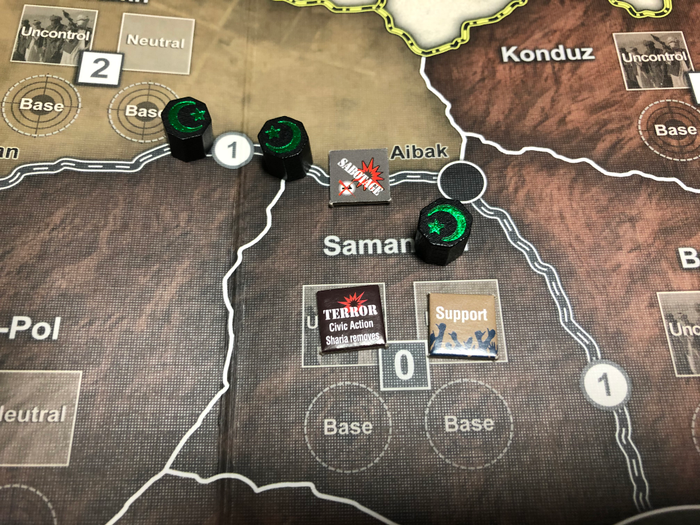 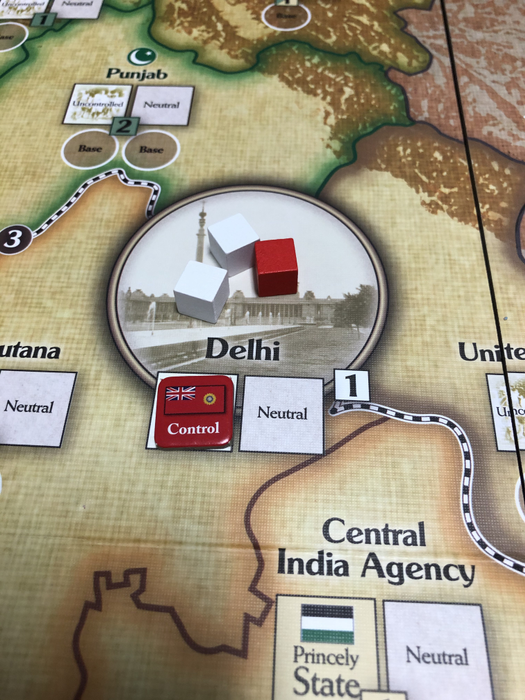 The Taliban have sabatoged a pipeline and the Raj has control in Delhi.

I have found that the solo mode can vary from game to game.  In some games it seems pretty straightforward to figure out what is intended but in others it can get a bit tricky.  The newer games use a card system along with decisions charts and tables to make the bots more realistic and competitve.

Depending on the game the bots are pretty good though they sometimes make some rather unintelligent decisions.  The good news is that after playing through half a game or so you really get a feel for the flow of the game and I had some confidence in adjusting the bots actions a little bit when they did something really non-sensical.

I definitely find the solo modes enjoyable but they don't live up to playing with other players and the interesting interplay that occurs.

That said, I do think that these games are still a lot of fun to play solo and if you are a solo only player I can still recommend them overall.  Some are easier to pick up than others for sure so time and patience will be required.

Where should I start?

In the mid tier I would put #Gandhi: The Decolonization of British India, 1917 – 1947 and #All Bridges Burning: Red Revolt and White Guard in Finland, 1917-1918.  These both throw different curveballs at you with either the way the faction interplay works in Gandhi, and the two phased game state in All Bridges Burning.

At the complex tier I would put #Pendragon: The Fall of Roman Britain.  This game has intricate combat, really interesting interplay between factions, and a lot more things to keep an eye on in general. 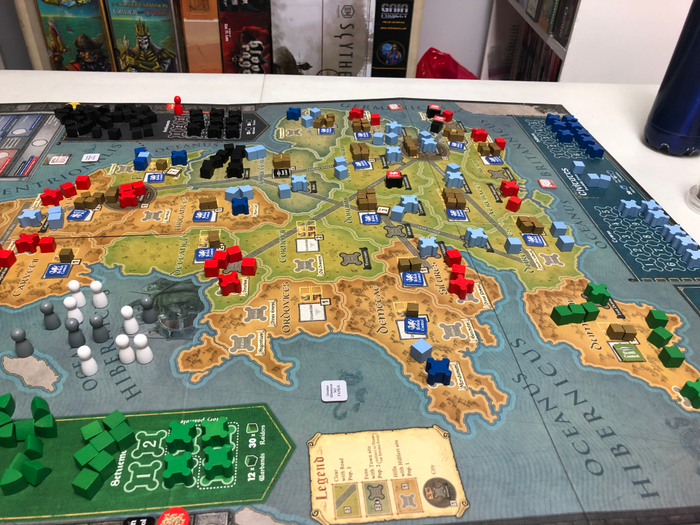 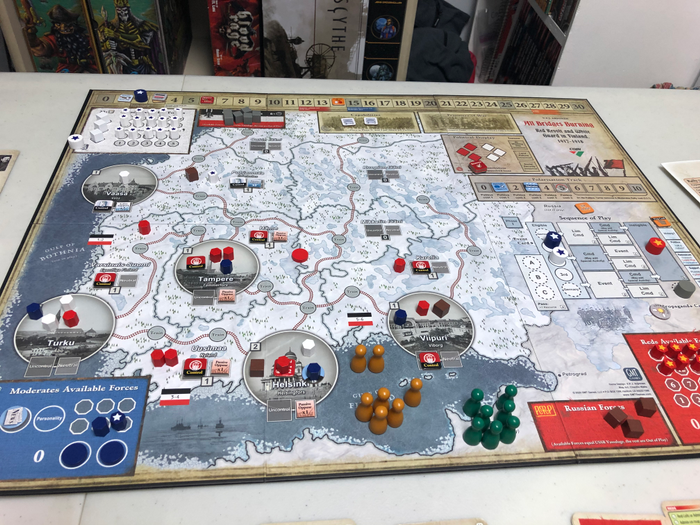 Mid-game maps from Pendragon and All Bridges Burning.

There is nothing quite as fun as sitting down and trying out a new faction you haven't tried out before to see how it meshes with the other factions.  The players have to balance the game out amongst themselves and figure out when it is best for their faction to attempt to grab the reins and win it all.

I definitely put playing a COIN game on to my list of "things a die hard board gamer has to do at least once"!

You can find the COIN games on GMT's web site here:

I want artistic on the cover. This is a big personal preference of mine.

For the sides I want to to be like a book. I want the game name, the publisher, the designer, and the illustrator. Look at #Pax Pamir (Second Edition) for an example of what I'm talking about.

For the back I want all the information. I think that GMT Games is as close as you can come to the picture perfect box back. Here is some, not all, of the information on the back of a GMT box.

So I want artistic front and sides and super practical back. 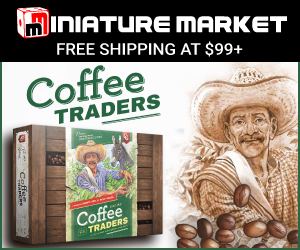