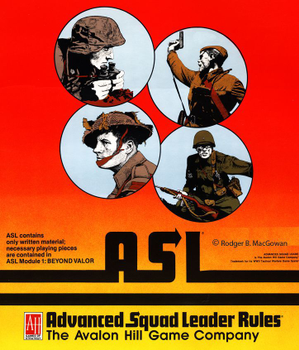 Advanced Squad Leader is the completely reorganized and re-designed version of the original Squad Leader system. While ASL is "advanced," it actually is a simpler game than the original Squad Leader became after the three follow-on gamettes. This three-ring binder is the basic rules for the entire system, and provides the ultimate combination of playability and detail. Full-color charts and beautiful pictures make this the most readable of rulebooks - and includes a full-service index as well for quick reference.

And ASL is more than "squads" - the system includes the rules for everything from machine guns to bazookas, tanks and ordnance weapons, paratrooper drops, glider landings and beach assaults. And much more. This set of rules is constantly kept up to date by expansions included with the modules.

This is just the rulebook. To start playing the game the newcomer must get, at least, the Beyond Valor: ASL Module 1. There are a great many ASL Modules available. "Core Modules" provide additional rules, units from different nationalities, and additional geomorphic mapboards. "Historical Modules" provide campaign games simulating multi-day battles using actual historical maps rather than geomorphic mapboards, including additional rules, counters, and paper maps. Many modules have dependencies on earlier modules.

By taking advantage of Print On Demand technology, MMP has produced a softcover version of the 2nd edition ASL rulebook. Printed on thinner paper than the regular rulebook, the Pocket Edition is less than 3/4 inches thick and measures approximately 7.5 X 9.5 inches.

The Pocket Edition contains core Chapters A-G and the full Index. Previously published errata pages are incorporated in this version of the rulebook; but individual errata items (as of Jun 1, 2015) are incorporated as a separate listing in the index.

The Pocket Edition also sports a handy IFT chart on the back cover as well as several frequently used tables inside the back cover.

The Pocket Edition is not meant to replace the full 2nd edition rulebook, but it is a comprehensive and handy tableside reference to the core rules that no devoted ASL player should be without.

Due to the nature of print on demand, the color bands for each chapter are designed to be full bleed across the fore edge only of the Pocket Edition although occasional copies may have color across the head(top) of the book.