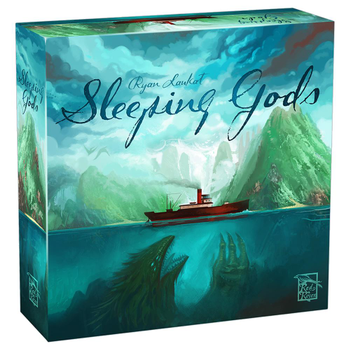 “Are the stars unfamiliar here?” she asked, and the sky grew suddenly dark, the star’s patterns alien and exotic. “This is the Wandering Sea. The gods have brought you here, and you must wake them if you wish to return home.”

In Sleeping Gods, you and a friend become Captain Sofi Odessa and her crew, lost in a strange world in 1929 on your steamship, the Manticore. You must work together to survive, exploring exotic islands, meeting new characters, and seeking out the totems of the gods so that you can return home.

Sleeping Gods is a campaign game. Each session can last as long as you want. When you are ready to take a break, you mark your progress on a journey log sheet, making it easy to return to the same place in the game the next time you play. You can play solo or with a friend throughout your campaign. It's easy to swap players in and out at will.

Your goal is to find at least fourteen totems hidden throughout the world. Like reading a book, you'll complete this journey one or two hours at a time, discovering new lands, stories, and challenges along the way.

Sleeping Gods is an atlas game. Each page of the atlas represents only a small portion of the world you can explore. When you reach the edge of a page and you want to continue in the same direction, you simply turn to a new page and sail onward.

Sleeping Gods is a storybook game. Each new location holds wild adventure, hidden treasures, and vivid characters. Your choices affect the characters and the plot of the game, and may help or hinder your chances of getting home!

Welcome to a vast world. Your journey starts now. 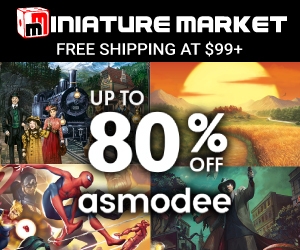 How do you play this game?

If you're a visual learner or prefer watching a video in addition to reading the rulebook, here's a how to play video by Rodney Smith of Watch It Played:

How replayable is this game?

According to Brenna Asplund of Red Raven Games, the content of the game is "finite in the same way that the content in an open world video game is finite, but there's over 100 hours of unique content included in the box." And similar to video games with storylines, Sleeping Gods features multiple endings that you can try to achieve.

How does "saving" work?

If you ever need to stop playing and pack up in the middle of a campaign, refer to "Saving the Game" section of the official rulebook. The game comes with journey sheets, crew envelope, campaign box, and tuck boxes where you can store all of the components that were out in play at the time of your campaign progress.

What's the difference between the retail and Kickstarter editions?

The Kickstarter edition included free metal coins, Dungeon expansion, and a painted miniature ship in the base game. Some of these products will be available for purchase from Red Raven Games' store.

Will the expansion materials fit inside the base game box?

How many card sleeves will I need? And what size?

I think I found an error, who should I contact with questions?

If you think you found an error, take a look at the official FAQ and Errata on Red Raven Games' website. If that doesn't help, try googling your question to see whether anyone on r/boardgames or BoardGameGeek might have had asked the same question before.