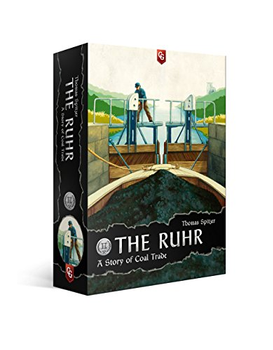 The Ruhr: A Story of Coal Trade

[+more]
The Ruhr continues the story of Thomas Spitzer's historic Coal Trilogy by transporting players to 18th century Germany during the industrial revolution. Coal is now in high demand as cities and factories throughout the world are in need of this coveted resource. Trade coal for valuable upgrades and plan your route to victory along the Ruhr!

Players transport and sell coal to cities and factories along the Ruhr river. By selling coal, players acquire unique abilities. In the beginning, players have access only to low value coal. By selling coal to certain locations, players gain access to high value coal. Additionally, players will build warehouses, build locks, and export coal to neighboring countries, all in the pursuit of the most victory points.
TS

by gidorah
SOLD: 3/2019 GAMEPLAY It’s Germany in the 1800s and players run shipping companies, moving their barges of coal down the Ruhr River in order to gain skills that will allow them to specialize in certain aspects of the trade, build a network of warehouses, ship to foreign customers, and improve the system of locks on the river. The Ruhr takes place over 12 rounds with each round having seven phases: 1) Players are hampered or helped by the event track; 2) A random lock tile is drawn that likewise hampers or helps; 3) Players place their barges and choose an action to take; 4) Players deliver coal; 5) Players unlock Progress Tiles; 6) Players place warehouses, remove locks, move their trading warehouses in Port Ruhrort, and/or pay back loans; and 7) The export market scores. THOUGHTS Ruhr has a lot to explore in terms of the progress tiles, using special actions to deliver coal in special ways, and different avenues for scoring. I like the idea of pick-up-and-deliver games and I thought The Ruhr might be the one for me: something heavier than say, Akrotiri or Oracle of Delphi, and that had more decision-making, clever play, and interaction. However, with time and more experience, I think I am less enthused. The fault that is the through-line for the Ruhr is bloat. 1. Set-up/Tear-down: The sheer amount of stuff (it doesn’t help that there are no separate bags or space in an insert for The Ohio components) that you have to stack, pile, and seed the board with is tiresome. 2. Rules: The problem is that the small rules and corner cases have me referencing the rulebook at least every other round. Sure, with more plays, this would be less necessary but, with the sheer amount of games out there, most gamers don’t return to the same game for six months if not later. 3. Phases = Overly Procedural: None of the phases are difficult in their own rights but to go through a phase with any kind of speed is, again, difficult unless familiar with the game. And because you’re having to remember what to do in each phase, I think it takes away from the planning the game asks of you in terms of where to place your barge, which action to take, which location to deliver to to ensure you get the right progress tile unlocked, and what to buy (read: score) at the end of the round. This is a personal revelation but I find myself less and less drawn to these procedural style games so I have a predisposed bias against The Ruhr. 4. Stuff for stuff’s sake: This ties in to the game being too procedural as well as issues with the rules. Why do we need to have a round event as well as an “event” pulled from a bag? I know they serve different purposes, and I don’t know how they could be folded into one event and keep both the thematic flavor and the randomness, but these two phases are crying out to be streamlined. The coal track is another instance of the game being overly complicated. Taking die from the white arrow only, dice getting pushed out, and the different tracks make for some needlessly complex systems. Likewise, the progress tiles give the game a sense that you can specialize in something but the truth of the matter is, players more or less finish with the same set of regular tiles and nearly all of the limited tiles get taken as well. This give the game the sense that there are different paths to victory but I would argue this is more or less illusory. You need to do a bit of everything. PROS -Components are really substantial from everything from chits to tiles to player pieces and boards. -Really cool that the Ohio board and pieces are included in the base box rather than selling separately as an expansion. I don’t know if I’ve ever seen that done before. CONS -Set-up/tear-down is a beast. -Bloat in rules. -Too procedural. -Stuff for stuff’s sake leading to more bloat. -Illusion of different paths to victory. -Phases make you feel like you’re doing a lot but there is very little room for clever play or player interaction other than being in the right turn order, beating someone to a delivery, and getting to a progress tile before opponents. -Lord knows why, with a reprint, they didn’t redo the art. The game looked boring when it was first published but then they double down on the reprint?! -The money is the same color as the yellow player pieces. Dur! -Not having something to help differentiate Ruhr pieces from Ohio pieces just adds to the dread of pulling this game down and getting it set up.

by sahmreviews | updated 22 days ago

1 | 0 comments | [+]
The follow-up to Haspelknecht, The Ruhr: A Story of Coal Trade delivers what Capstone Games promised - a continuation of the story on how coal was mined and transported along with a heavier game that...
See Comments

The Ruhr: A Story of Coal Trade Overview

The follow-up to Haspelknecht, The Ruhr: A Story of Coal Trade delivers what Capstone Games promised - a continuation of the story on how coal was mined and transported along with a heavier game that...

[The Ruhr: A Story of Coal Trade]

The Ruhr: A Story of Coal Trade 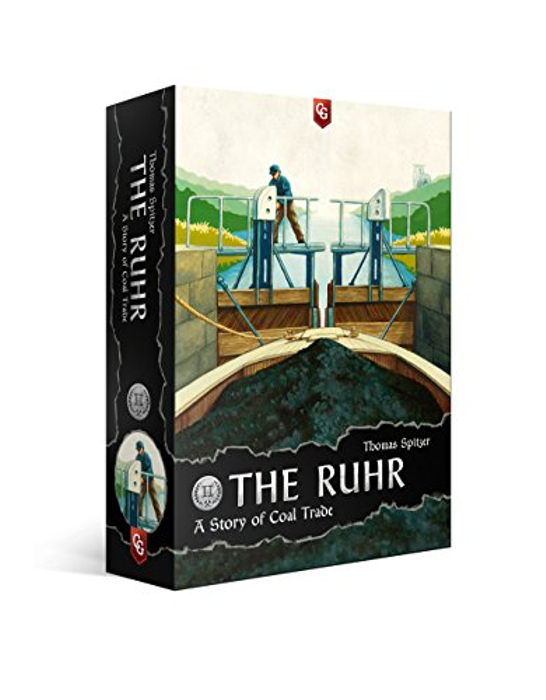 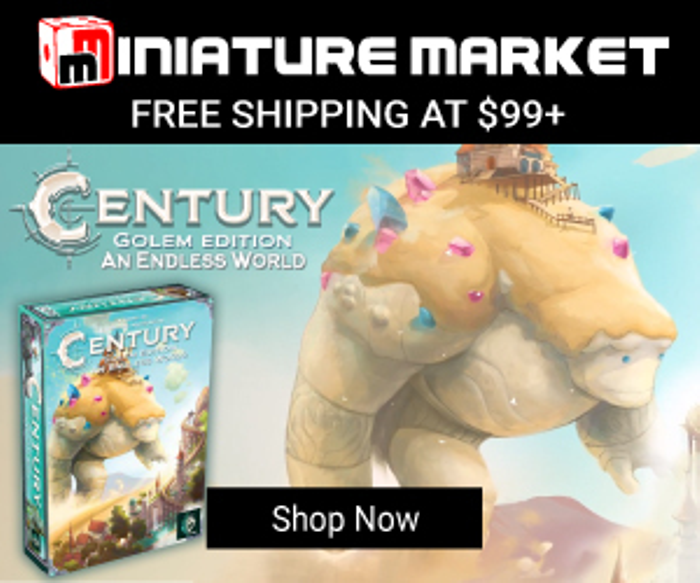