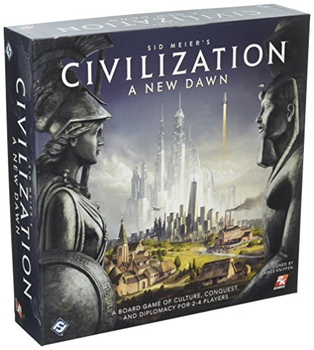 The day of small nations has long passed away. The day of Empires has come.
– Joseph Chamberlain

Rule the world and build an empire to withstand the test of time in Sid Meier’s Civilization: A New Dawn! This new tabletop game based on the groundbreaking video game series lets players become some of history’s greatest leaders as they try to advance their people through the ages, from ancient history to the modern era. Trade, battle, build, and pursue your agendas to become the premier world power!

Designed by James Kniffen, Sid Meier’s Civilization: A New Dawn is a turn-based strategy board game for two to four players. As leaders of competing nations, players must expand their domains, gain new technologies, and build wonders to rise above all others and shape the world to their own vision. By balancing their nation's pursuits, leaders can build a new society greater than any that has come before and guarantee that their people will not only survive, but thrive.

At the start of each game, players draw a random leader card that they will embody for the duration of the game. Each leader comes with a unique focus bar setup to align with their nation’s historical pursuits, as well as a special ability to give them an edge other players won't have. Each player also receives a set of cities, caravans, control tokens, diplomacy cards, focus cards, and a tech dial.

Next, players will build the land they will set out to conquer with map tiles, populating it with barbarians, natural resources, and city-states. While advancing their nation’s pursuits presents leaders with enough challenges, world events also occur periodically that affect the map and all of the players, such as barbarian attacks. Before each of the first player’s turns, the first player advances the event dial, possibly producing one of these events.

The leaders’ goal is simple: to master this domain in order to become the leading world power. However, the exact method of their conquest changes with each game. These potential agendas are detailed on victory cards, three of which are set beside the map at the beginning of the game. Players race to complete one of the two agendas on each victory card. The first to accomplish this task wins the game.

Players complete the agendas given on victory cards by accomplishing tasks in five different focus areas: culture, science, economy, industry, and military. Players organize their focus areas by constructing a focus bar at the beginning of the game, which is placed beneath each player’s leader card. A player’s turn revolves around the focus row of five cards below his or her focus bar.

The focus row represents a nation’s various pursuits. Each focus row has five slots, one for each type of card. The cards within the focus row shift to different slots as the player takes turns to represent a nation’s investment of time in that particular project. A card resolved in the fifth slot has a greater impact than one resolved in the first slot, as more time was spent on that pursuit. Cards within the focus row generally shift toward the fifth slot until they are used, which is when it moves back to the first slot again. Over a series of turns, players use these cards to build their civilizations from single cities to sprawling empires filled with wonders and technology.

With a wide array of choices, leaders must choose what type of civilization they will build. There are five types of focus cards that players can use to advance their civilizations, indicated by an icon in the upper-left corner. Each player’s focus row contains one card of each type, starting with level “I” and advancing as their pursuits come to fruition. During the game, players can acquire advanced versions of their starting focus cards, which have greater impact on the game.

A leader may choose to create a peaceful civilization defined by artistic and intellectual pursuits. For artistic pursuits, the culture focus cards allow players to place control tokens, which can expand their territory and claim resources. The card’s focus row slot also determines which types of terrain on which the player can place control tokens. For the intellectual, the science focus cards advance a player’s tech dial, allowing the player to discover new technologies. The dial advances spaces equal to the number of the science card’s focus row slot.

Conversely, a leader may choose a competitive civilization that uses rival nations to advance its own agendas. Economy focus cards allow a player to interact with city-states and rival cities by moving caravans. The card’s focus row slot determines which terrain types the caravans can move into. The industry focus cards allow a player to build either a new city or a world wonder, which grants a powerful ability to the player who controls it. If building a city, the card’s focus row slot determines which types of terrain the player can consider whereas, if the player is building a world wonder, the focus row slot contributes toward the cost of that wonder.

Lastly, a leader can build a militaristic civilization that rises to prominence by conquering any empires that stand in its way. Military focus cards allow a player to either reinforce defenses or perform attacks to defeat barbarians, conquer city-states, and capture rival territory. The focus row slot affects either how many control tokens can be reinforced, or affects the strength of each attack. Reinforced control tokens offer some protection against barbarians and other players by increasing its own combat value as well as those of each adjacent friendly city and control token. Otherwise, a player may choose to become a great military leader and battle rival cities, claiming an enemy’s loot and world wonders for themselves.

By advancing their culture, science, economy, industry, and military, rulers can ensure their nation’s survival through the ages. However, true leaders want their civilization to not only survive, but thrive by advancing their pursuits and completing agendas. To become the supreme world power, a player must complete at least one agenda on each victory card presented at the beginning of the game. At the start of the first player’s turn, if a player has completed one agenda on each victory card, that player wins and ensures that their civilization will continue to flourish.

Will you conquer the world by spreading your influence, defeating enemy armies, or becoming the most technologically advanced nation in the world? Will you build a nation that will stand the test of time, or crumble into dust? The fate of your civilization rests in your hands. 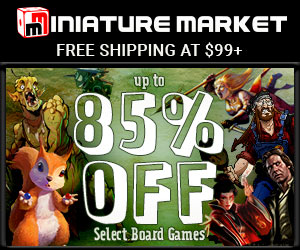 Save Big On The Next Game Night!

Adventure awaits! Embark on a journey of strategy and fun with our latest board game sale. Up to 85% off some of the most exciting board games on the planet.
Visit

Save Big On The Next Game Night!

Adventure awaits! Embark on a journey of strategy and fun with our latest board game sale. Up to 85% off some of the most exciting board games on the planet.
Buy Now