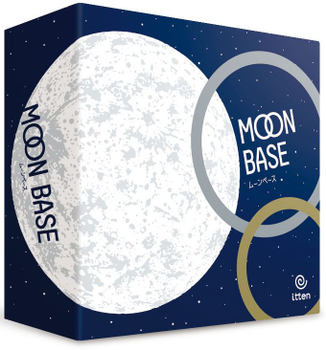 Moon Base is a two-player abstract game set on the moon, proceeding over six rounds. The player replenishes the 'Ring Module' at each round, and builds and builds the moon base while placing and stacking on the crater. The player uses their three-color ring well to advance their color. At the end of each round, it will be a point to construct a 'residential zone' and 'resource facility', but while aiming to move the 'mobile research building' effectively, players will also aim for bonus points that can be earned at the end of the sixth round . Finally, the player with many total points wins.

Game Abstract
Moon Base is a 2 player abstract game about Moon Development. There Are 6 Rounds. Each round, players choose a set number of ring modules to place on the craters, or place on top of each other to develop the Moon Base. Using the three different colors of the rings, players try to build in a way that their colors will gain the upper hand. At the end of each round whoever have has the highest total points wins the game with the highest points by gaining bonus points at the end.

Unique moon board
The impressive crater of the moon board is the square of this game. The craters are overlapped, so if you put a ring here, you can crush the grid if you put a ring on it. Depending on which crater the ring is placed in, the situation of the board changes and affects the game plan. The crater you care about is the first to win!

Stacked 3D game
The ring modules that build the moon base are stacked in two steps, three steps, and so on, but the position you place at that time affects the later turn. It is a strategic game, but it has a mix of play unique to analog games. "Having this ring a little more inside!"

Random setup
It is an abstract game, but the ring module is randomly prepared. Once the game has begun, it is only your choices and decisions. Since all ring modules are disclosed, which ring do you pick? Read the movement of the other party for the next round and change the randomness inevitably.

Offensive and defensive that rises in the final stage
Each player competes with only 4 hands x 6 rounds = 24 hands in total. Because the bonus points can be earned depending on the situation after the final round, the offense and defense become hotter as it gets closer to the end. Find a surprising hand to decide the reversal.

Think of the future on the completed lunar base
The game ends when the Moon Base is completed at the same time. The spectacular sight on the board that came to the end of the competition is a co-production with a rival. Look at the moon in the night sky and feel for the coming future.
- publisher's summary - 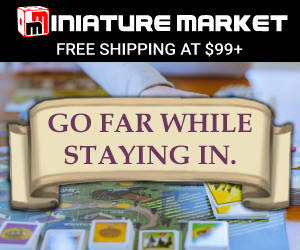 Go Far While Staying In

Looking for an excuse to stay in? Table top games are perfect for any occasion and you can find them right here.
Visit

Go Far While Staying In

Looking for an excuse to stay in? Table top games are perfect for any occasion and you can find them right here.
Shop Now