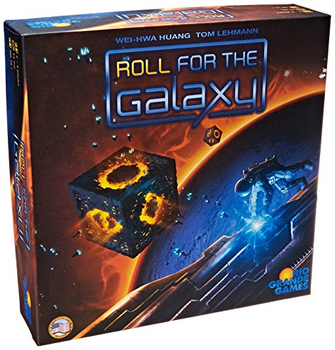 [+more]
Roll for the Galaxy is a dice game of building space empires for 2-5 players. Your dice represent your populace, whom you direct to develop new technologies, settle worlds, and ship goods. The player who best manages his workers and builds the most prosperous empire wins!

This dice version of Race for the Galaxy takes players on a new journey through the Galaxy, but with the the feel of the original game. 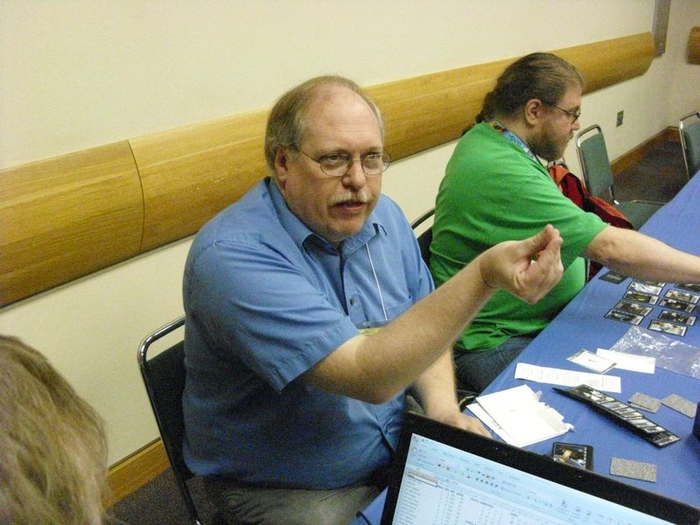 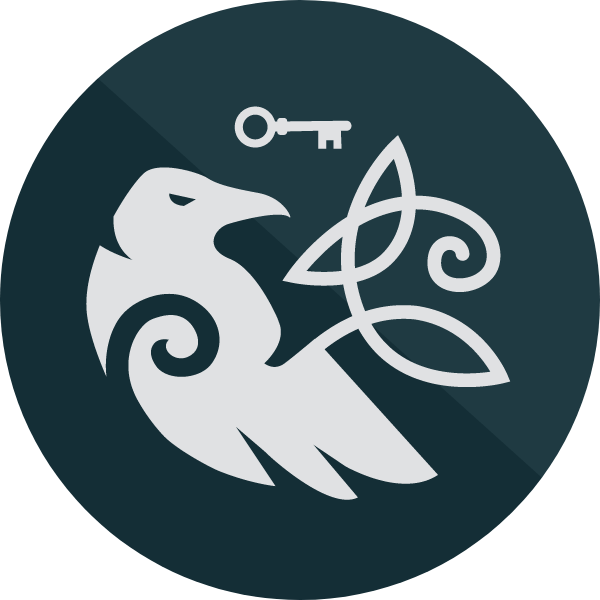 by rynelf
--Mar2015-- This is entertaining. I think it's lighter & fluffier than Race: but it's much easier to get into play; easier to explain; and likely an easier sell for folk that haven't played Race dozens of times. 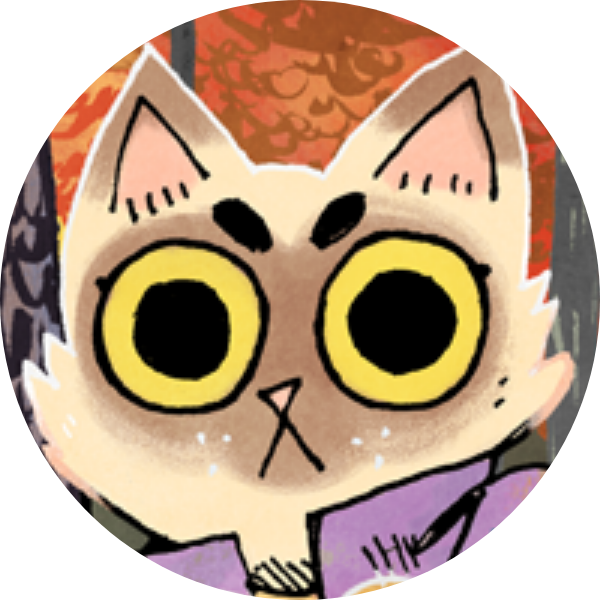 by bastwood
A fun tableau/pool builder with lots of colorful little dice. Takes a bit of time to teach to new people, but plays fast once people get it. I prefer Race for the Galaxy and New Frontiers, but will not turn down a game of Roll either.

by povertidonki
I really enjoy the puzzley nature of moving my dice and predicting other players actions. A very fun dice mitigation experience.

Is Roll for the Galaxy Fun? - Nights Around a Table (https://nightsaroundatable.com/2020/05/04/is-roll-for-the-galaxy-fun/) [Roll For The Galaxy]

by nightsaroundatable | updated 15 days ago

Roll for the Galaxy Digital Beta Testing is Live! [Roll For The Galaxy]

by BenjaminK | updated 15 days ago

Head's up! #Roll For The Galaxy is doing beta testing for its digital game. Sign up at the link: templegatesgames.com/beta

No idea if they're being selective or letting anyone in, but either way, you should do it.

by nightsaroundatable | updated 15 days ago

2 | 0 comments | [+]
Ryan pits customizable dice against each other while delving into a brand new copy of Roll for the Galaxy: Rivalry, the second expansion in the Race for the Galaxy board game spin-off....
See Comments

During consumption what happens with a purple die?

When scouting, do the tiles you return go back in the bag before or after you draw tiles?

Is Roll for the Galaxy Fun? - Nights Around a Table

It's faster. It's dicier. It has SPACE BAG. But is Roll for the Galaxy any fun? Ryan breaks it down....

Roll for the Galaxy Digital Beta Testing is Live!

Head's up! #Roll For The Galaxy is doing beta testing for its digital game. Sign up at the link: templegatesgames.com/beta

No idea if they're being selective or letting anyone in, but either way, you should do it.

Roll for the Galaxy: Rivalry vs Dice Forge customizable dice comparison - Nights Around a Table

Ryan pits customizable dice against each other while delving into a brand new copy of Roll for the Galaxy: Rivalry, the second expansion in the Race for the Galaxy board game spin-off....

During consumption what happens with a purple die?

When scouting, do the tiles you return go back in the bag before or after you draw tiles?

Mixed feelings. After a solo play and a two player play, I wanted to sell it, but I played it with 4 a few times and my wife won't let me sell it now. The art is fantastic, the table presence is great and the card interactions are fun.

My main issue with the game was that with 2 players, you hardly see any cards. With 4 players, you blow through the deck and I found that MUCH more enjoyable, but it does take longer. I've seen some pretty neat combinations of cards used, so there is a lot of potential there. It is definitely a game where you plan out what to do as you see the cards come to your hand and the Meadow. The meadow mechanic where there is a shared group of cards is something I quite enjoy. The complaint about "preparing for the season" does feel odd, until someone explained it to me as how different animals prepare differently and at different times for the different seasons, then I was fine with it.

I'd probably rather play #Roll For The Galaxy if it's me picking a tableau/engine builder, but I think the art really does set #Everdell apart enough. If the theme isn't interesting to you, I'd probably pass though because there are games with similar feel that have different themes.

I do really like this list a lot better. I do find it interesting how much movement there was for some games, but, some games had virtually no change in rank, #Roll For The Galaxy is number 8 in both lists. #The Castles of Burgundy only moved 1 spot. 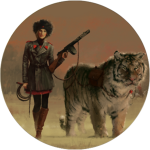 In no particular order:

#Paladins of the West Kingdom

#Roll For The Galaxy

I've known about most of these, but the more I hear about them the better they seem. All of these sound awesome now.

Having only played #Roll For The Galaxy I would actually say go for #Spirit Island. While Roll for the galaxy wasn't bad it felt like a very solo-y experience to me. There wasn't much interaction with the other players, and although the puzzle was interesting and I didn't have a bad time by any means it didn't blow my socks off either. 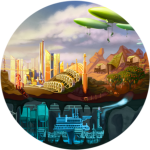 I still want to try #Spirit Island and #Roll for the Galaxy. For me, I have had #Roll For The Galaxy, #Troyes, and #Le Havre on the longest. I just really dont like spending too much on board games (I am super cheap). so much shame... I'm just going to answer the second question about my favorite space games.

#Alien Frontiers is probably my favorite. It is also one of my wife's top games. I like dice and dice manipulation. One thing that is good about this over similar games like Kingsburg is that you aren't punished as much for low rolls. Low rolls are better in  some spots so you can still be competitive.

#Race for the Galaxy #Roll For The Galaxy..

I think Race is one of the best two player games made. Being able to choose two actions is really fun. Roll is different enough to have a place in a collection too. The sell/trade is a little more straight forward and it is easier to dig for tiles you want.

#Ascending Empires I don't play a lot of 4x games, but I like this one. It is a flicky game where you flick your ships around to board to orbit and colonize planets. When getting multiple planets of the same type, your science goes up in that color and you get special powers. It also plays in under an hour. But don't take it too seriously, because the flick mechanic can be maddening at times.

#Ad Astra Advanced Settlers of Catan in space. I'd like to see a nice deluxe reprint of this game.

I like almost any game with player boards and chunky/custom dice...

#Quantum has these and it’s a great looking game.

#Roll For The Galaxy is amazing in terms of components for these reasons too. Plus the cups and shields are really fun to have.

#Space Base is cool with the evolving player board, however it is very inconvenient to tuck card after card.