Your Favorite "Faction" Across All Games

What's your favorite "faction" you've played as out of all games that have different player powers? And why?

For me, it would be the Woodland Alliance from #Root. I love having different player powers in games and Root has the most asymmetry out of them all so far. I really like their "arc" throughout the gameplay, where you start with very little influence over the map and grow to be a pesky presence for everyone. It's a fun concept to utilize guerilla warfare in terms of commanding a tiny troop that starts with an advantage on every one of the dice rolls.

It's not so much a faction as just a player character but I adore the races in #Cosmic Encounter. The 'sniveler' (that player can "whine" if it has the fewest resources, and the other players pay it to shut it up") is a funny one that comes to mind.

I am definitely interested by Cosmic Encounter. I love the idea of the different alien races with crazy powers that all interact in different ways. And I think it counts for this question!

Dude if you ever have the opportunity to play it you should! its not the most amazing game out there, but is for sure a classic and is so different everytime you play!

I feel like it could be one of those games that if your group is into it, you could just play it forever, haha

The logistic challenge, the raiding of planet after planet, the possibility to capture somebody and turn him/her to the dark side... moehahaha!!!

This is a really good answer.

Hahaha, that's so fun. I hope to play this one day. I could probably convince a friend to play on Tabletop Simulator...hmmm

The Unity from #Sidereal Confluence. I like that they are playing a slighty different game than everyone else with their slightly more valuable wild cubes.

This game just seems so insane to me, haha. One that I'd like to try but am not confident enough that I'd like it to buy it myself.

Yeah, I get that. You do need the right group for it. But it is so much fun. The only hard part is teaching the assymentric rules. Everyone tunes out when you are explaining how someone else's alien works, but it's super important.

How many different available factions are there?

NINE! The first time I played, we played with the full nine players. Took forever to explain, but the game doesn't take much longer with more players since the negotiation all happens at the same time. Plus side is wen it's safe to meet again, that's nine people all ready to play :)

I love variable player powers so that sounds like my type of game :)

Well right now my favorite Faction is going to come from #Root (duh).  But I do think once I can get #Dune to the table that could change.

From Root my favorite to play so far is the Lizard Cult.  I love the way they are so thematically run.  Also, they are such a challenging faction to play well.  There is also something I love about putting yourself into positions to pick fights with people defensively.  It's really different to hope that you lose 3 warriors a defensive fight.

Any early guesses on a favorite faction for Dune?

I'm feeling like because I like the Fremen so much in the Novels and I do like the way they look I'm going to enjoy them.  But, I also think playing the Bene Gesserit would be awesome, I like trying to impact the game of others in a very real way, so trying to control when someone wins seems like a lot of fun.  I also like backstabbing people though so I think the Harkonens could be awesome, and the Atreides ability is also really cool, I like having all the info.  I don't have a huge interest in the other two at this point.  Right now though I think I'm most excited to play as the Fremen.

Yeah the Emperor and Spacing Guild are the 2 factions we give to first time players or players who are a little less confident or something like that. They always have money, which is definitely nice, but they don't have any really cool abilities to get excited about, in my opinion. The Guild's ability to take their shipment turn whenever they want can be powerful, depending on the situation, but it's not sexy lol. They also have one of the best Karama abilities, in my opinion - being able to stop the shipment of one faction for a turn. That actually won us the game last time I played when I was allied to the Spacing Guild.

I love that description of the Guilds ability!  I for sure think that I will give the Emperor and Guild to the less skilled players in my gaming group the first few times.

Yep that's a good call! Fremen are also decent for first time players in my opinion. They don't get as much spice but they don't need as much either.

The Fremen in #Dune. I just have an emotional connection to them lol

Fremen are sneaky good in Dune. The fact that they don't have to pay spice for battle really frees them up, strategy-wise.

I'm with you Phil. I think the woodland alliance is probably my favorite so far.

Have you gotten to play with any of the expansion factions?

I haven't either. My friend has both expansions and I've seen him play as the Lizard Cult and the Riverfolk. Pretty interesting factions. I'm still learning the base factions so I don't think I'll be using the expansion ones for a while haha

Off the top of my head, I'm going to go with #Summoner Wars: The Filth Faction Deck. They break the usual rules of summoning new units and allow your commons to transform directly into horrifying mutations. Fun to play, and the art is nice and gross. :) 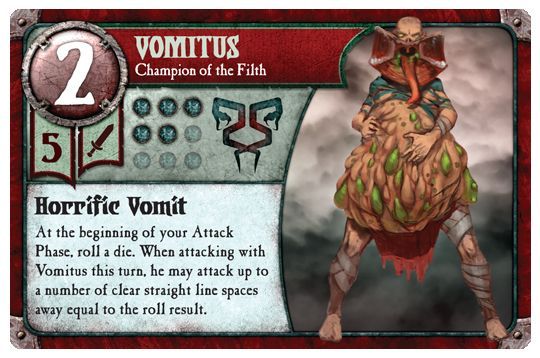 Haha oh my god, that is disgusting and wonderfully thematically filthy.