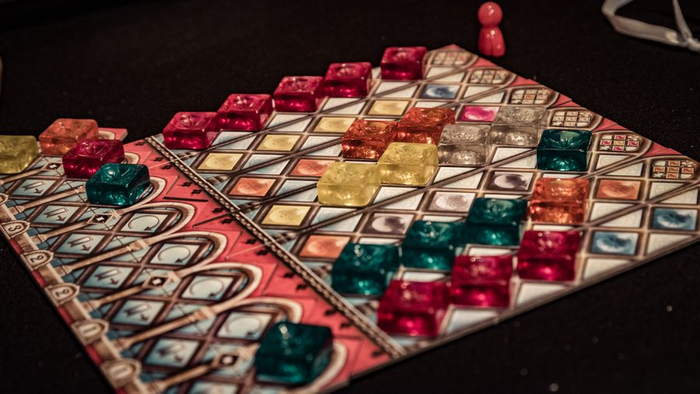 Two Christmases ago, I was beginning to really explore expanding my board game collection. I fell in love with the simplicity of Azul, yet the cutthroat nature of the game drew me in further. It also helped that the components were top notch and I was hooked. I asked for the original Azul for Christmas, I got it from my sister-in-law and then when I got to my parent’s house I saw a box that looked exactly the same as the one I had already received. I started thinking I was going to have to return this and I was even scheming about what different game I could get before I even opened the package. The time came and I was surprised to see Azul Stained Glass of Sintra (at the time I did not even know it had been released!).

I had a decision to make, do I keep it? It is technically a different game and I was interested in it, but do I have a place in my collection for both games? I decided to keep it and see for myself, and I have not been disappointed.

In Azul: Stained Glass of Sintra (I will call this SG for the remainder of this post) you are building a stained glass window instead of tile wall in original Azul, and SG functions very similarly to original Azul in their base mechanics. You have a certain amount of factories and you load them up with 4 tiles, each player takes turns choosing one color from a factory and taking all of those tiles and the remainder get pushed into the center market. You then have to place your tiles in your player area and this where SG shines compared to standard Azul. In standard Azul, you have a static player board that functions the same every game, unless you play the grey side…which I have never done. Anyways, with SG the player board are variable every game! You have 7 columns that you shuffle up and place in front of you in a random order and you maximize your output from there! When you fill up a column you move one of the tiles to the “stained glass window” and score points (more on this later). When you fill up a column once, you flip the whole column, when you fill it up a second time, you remove it from the game which then limits the spaces you have to take on more tiles. Big time plus for SG.

Another big plus about SG is you have an additional action to choose from each turn. When you are placing tiles in your columns, you can only place them to the right or in the same columns as something called your glazier, and when you place to the right of the glazier you move him to that column. It looks like a little worker, but it functions in an interesting fashion. Each turn you have the choice to either take tiles and place them in your area OR you can move your glazier all the way back to the left most column providing maximum flexibility. The tension lies in whether you will be able to get the tiles you want after making that move! It can also be used to avoid being stuck with tiles you do not want or cannot take, which seems to be the biggest complaint surrounding the original Azul.

Back to scoring. This is the only semi-confusing part, which typically pushes me to bring out original Azul before playing SG with any new players. You score when you place a tile below a filled column. You score the points for the column AND any other column that also has a tile below the columns. Azul and all of its variants make explaining scoring difficult! There is also two options for final scoring but I have only ever played one variant. You score based around these little black diamonds on your board below the columns. If you have 1 tile around it you get no points, 2 tiles you get minimal points, 3 tiles you get good point and 4 tiles surrounding the whole thing gets you 10 points. That is typically easier to explain but it can be hard to remember.

All in all, I am happy that I have kept Azul: Stained Glass of Sintra, it has become one of me and my wife’s favorite date night games. We typically play a minimum of 2 play throughs each time we sit down to play!

+ Comes with a tile container for used tiles!

- Scoring can be confusing

Ooooh I like the sound of SG. It's not likely for me to get it since it probably won't get that many plays but it appeals to me more than the original. With the original, sure, you need to work with what you got but it feels a bit samey over time (to me.) The game itself would excite me way more if I had a group that's very cutthroat. When it comes to playing with the family, it's much harder to play mean lol

And I agree about scoring. Even with the original, first timers constantly trip over how you count your score.

Edit: That's an AWESOME picture of SG! I uploaded it to the game page :)

We own all three and really enjoy them all.  I would reccommend them to anyone.  There is certainly a little mnore going on in the 2nd and 3rd games from a gamer perspective but all are well done and fun to play.

Which is your preferred rendition?

I think I like the 3rd one the most at this point.  It just seems to have the most going one of all three games.  There are a lot more ways to score points and I like the options.

Personally I think #Azul: Stained Glass of Sintra is the worst of the 3 azul games.  The additional scoring confusion and set up time for SG makes is my least favorite way to play.  I have played #Azul: Summer Pavilion a bunch and that gives me a lot of the same tatical feel and decisions with a lot less scoring confusion.  If I ranked my preference it would be SP, #Azul and then SG.  Your milage may vary ;)

I have yet to play SP so I have no gauge on comparison, I have also only played SG at two players with my wife and we have created a pretty fun strategic meta there. The standard Azul has been played a lot so this is a refreshing take for us.

I have heard SP is on the more forgiving side? Like you can stash tiles you are unable to place then place them later?

Its not necessarily more forgiving as it is more tatical IMO.  You do have the option of carrying up to 4 tiles over from round to round and SP adds a wild color each round so a lot of times the tiles you carry over are the ones that are going to be wild in the next round.  This adds another level of depth to the tile drafting in the current round as you are always looking ahead to see what color is wild next and even if that color doesn't help you this turn having them for the next round is a nice boost.  At the end of the game any tiles not placed are negative points and at most I've ended up with 2 of those.  The primary negative points still comes from taking tiles from the center and the scoring is modified it so that the number of tiles taken is the amount of negative points you get.  So you take 4 Blue + 1 wild = -5 points, but only for the first player to go to the center.  Which again adds another level of decision....do you go early to get a small negative or wait until you can get a massive tile set in a color you need but take the larger point deduction.

Interesting, even though I will most likely never own SP, I can appreciate that they change the overall mechanics of the game to make it feel unique. They change the negative tiles throughout all of the renditions, which I find to be fascinating! Thanks for helping me understand the differences.

I had a very similar confusion the first time I came across Azul. I actually played Stained Glass first, a friend of mine picked it up from Essen and brought it to play. I had heard of 'Azul' but didn't know it had sequels coming so I assumed that this was the original just with fancy see-through pieces. Then, I found a damaged copy of Azul in a warehouse excess store for pennies and picked it up, I opened it up and realised it was very different to the game I had played.

Have you been able to play both editions? What were you thoughts in comparison?

I have only played SG that once, and Azul maybe four times now. I don't particualry recall taking issue with the more complex scoring of SG at the time, although I do enjoy the speed with which things move along in Azul so maybe if I were to play SG now I would feel it more. I really liked the way the meeple/token moved along the track, controlling where you could put the tiles, and trying to balance the action efficiency with scoring efficiency and don't feel like Azul has an equivalent balancing act. However, I think the randomness of the 'Stained glass' strips you get, can kind of force your hand a little, so I think I prefer the flexibility of Azul where you can put any colour into the lines but if you're not careful you can snooker yourself.

I can't say I really prefer one over the other, they both feel fairly similar and now that I have Azul I don't feel a need to get either of the other two. That niche is filled.

"snooker yourself" Never heard that lingo!

I can see the argument for both for sure and I am not sure I would have voluntarily chosen to have both in my collection, so I understand that!

Oh looking forward to reading through this! I still have only played the original Azul.

It adds some nice wrinkles! I tried my best to highlight those!

Great write up! The glazier does sound like it adds another layer of strategic choices. I hope to play this some day! Many reviews I've seen of the series say that Summer Pavilion is the best of all. Have you played that one yet?

I think the glazier is the best addition by far. It can trip people up when calculating if they are gonna get stuck with a bunch of tiles they cannot place!

I have not played Summer Pavilion. I have heard it is the most forgiving of the three titles. I would have to play it to get a read on it but I am not clamoring to add it to my collection!