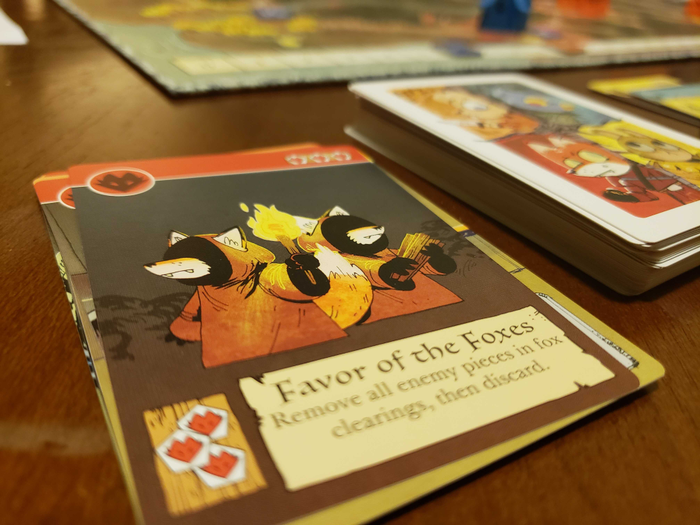 I finally got around to this last week and wanted to share my thoughts!

(+) Accessibility - There's so much PnP material around Root that if you have the base game, it's very easy to try out the other factions and the bots. A file is available on our game page as well, except that it's based on version 5 I believe, which I think is one version behind the official published version. The updated boards for the bots can be found here: https://www.dropbox.com/sh/iq4rp6pwdntvh1c/AAC6S2-lj_KLclFb4MaxCUXWa?dl=0.

You just need to print out the faction board and difficulty level cards for the bots. The bots use the same token as their non-bot counterparts, so there really isn't a need to buy #Root: The Clockwork Expansion unless you have some cash to spare and want the official set. For me, I'm leaning toward getting #Root: The Underworld Expansion next year and just settle with the PnP for now. Will see where this goes after I get to play some co-op with my wife.

(+/-) Rules - The rules are simple and short, but I personally had a bit of a hard time interpreting the nuanced language and was left unsure whether I'm making the correct moves for the bot.

(+) Gameplay - Ever since I started soloing games, I've come across maybe 3 or so different types of solo modes: "beat your score"-types, "hazard"-types, an an actual AI opponent. I enjoy the first two types for the puzzle solving fun provided that it doesn't require so much setup, but I often settle for an app experience. Root falls under the third and it's my favorite type (#Architects of the West Kingdom's solo mode is pretty close to this too) because it really stretches my muscle for strategical/tactical plays, I get to explore different factions, the AI opponent does a great job of simulating a real opponent, and there's a good amount of luck in combat and card draws that make it exciting.

I especially like what they did with the bots for two scenarios: (1) when a bird suit is drawn from the order card and (2) when the bot fails to execute an action in a turn. For the first--bots execute actions based on suit of the "order card" drawn for its turn. The bird suit is a "wild" in Root, and is valuable to many of the factions. So when this suit is drawn, the bot goes through an "Escalated" phase where each of its actions are more powerful. For the second--there are occasions when the bot has "Recruited" all of its warriors onto the battlefield that it can't execute the "Recruit" action as part of its decision tree (or times when it can't "Build" anymore on a particular suit of clearings because they're full. Rather than making this a safe turn where the bot would essentially give you a free pass like in most games, Root just makes it more challenging because this reflects the human opponent's failure to adequately suppress the bot. This essentially leads to the bot taking action A, B, C, failure to execute D, go back to the top and execute all of the actions again based on a different criteria. I'm not sure if this makes any sense for you, but it sure is tough and simulates how you have to constantly keep your opponents in check in Root.

TL;DR: This is my favorite solo game now! I played as the Eyrie against the Mechanical Marquise and won a close game of 30-24. After trying out Marquise vs. Electric Eyrie, I'll probably go with the Woodland Alliance against two bots! :)

I forget - do you have the Riverfolk expansion already?

Nope, no expansions yet!

I am so looking forward to giving this a whirl.

Hopefully soon, would love to hear your thoughts on it.

I hope so too. Unfortunately the possibility of travel opening up any time soon looks pretty low....

Do the bots only work as a solo mode or could you have 2 players competing with each other and one or two bots?
2
[-]

I'm going to mirror a bit what's been said already, but I think if you only had 2 players that using a bot is highly recommended.

Never hurts to have things corroborated! Thanks

As others have mentioned, you can do a variety of things:

Nice are they a challenge to beat?

Based on just my single play against the Mechanical Marquise, I'd say definitely, and I was playing on the normal level too. You can raise the difficulty level up to 2 I believe, and you can also give the Mechanical Marquise some unique traits such as "fortified" (buildings require additional hits to take them down), "blitz" (the bot will have a tendency to go all in on offense whenever opportunity presents itself, and two other traits. The other factions also come with their own set of unique traits that you can choose to apply in any number of combinations.

Nice, I was thinking of getting a couple of folks to play root on TTS with me, so good to know we have to not option if there's not too many available :)

This is pretty neat, I had no clue that they had such variability! It makes a game that works well at higher player counts work well with lower player counts!

You can definitely add a bot to a multiplayer game.

My impression is that you can throw the bots in a multiplayer game to up the "player count.

Thought this would be a good place to share this.  I found this thread on BGG, it has links to some of what @philryuh shared with me earlier this week, but also has a few bonus links for Lizard, Riverfolk, and Corvid bots.  Duchy coming soon.  I know you don't have any expansions yet but if you do decide to get either these would add a lot I think.