Root Faction (looking for some ideas/help).

Way back when I first posted asking about Factions you'd make I shared a very base idea of something I'd like to create.  I'm not so much worried about getting it into play as I am just interested in using my creative juices in regards to my favorite hobby.  I have some ideas of how I'd like that faction to look but wanted to pick some brains to see what ya'll could add (it is far from complete).

Midnight Mayhem - This Faction Political Personality would be Anarchy (as such they interrupt every other faction to create chaos).

Traits (the characteristics at the top of the board):

Nightmare - All actions take place at the beginning of another factions Evening Phase.

Copy Cat - Uses the current faction for purposes of movement and battling.

Assassin - If a faction has a single warrior in a clearing you may remove it without battling instead of using the battle action.

Limited - Can not rule a clearing.

Actions (remember there is no need for Phases because of the Nightmare Trait) (Take any 2 actions):

Battle - In clearing with pieces of the current faction (you may Battle other factions as long as they have pieces in that clearing).

Tree Fort  - Place a Fort in a clearing ruled by the current faction.  (This would be a token).  Forts take building spots but do not count toward rule.  (I'm thinking this limits their ability to rule, but still has an impact on other players)

Looks like it would be a fun one to try!

I hope so.  Still ironing it out but I'm hoping to eventually give it a go against a bot or two at some point this summer.

Very cool! I'm sure you will but keep us updated

For sure.  Once I feel like I've finalized some stuff I want to make a new post.  I'm hoping to use the Faction board Template but that's going to take a little figuring out.  Then I'm going to play test the faction against Bots using the Corvid pieces (I think).

I just respond on my iPhone.

Just for fun, I was thinking of trying to sketch your faction's look when I find some time! Any idea on some of their characteristics? Body size/proportions, race/animal, outfit, etc?

That would be awesome!  I'd love that.  Maybe we'll all work together and actually make a viable fan faction.

I definitely think Bats would be the lead to be the Warrior Meeples since there are more of them in general.  I wonder if there would be a way to incorporate some kind of leader cards with different traits.  Perhaps there could be 4 - 5 basic actions and then 2 actions specific to the leader picked.  (I'm thinking this is more like the Vagabond and less like the Eyrie in the sense that you pick one leader for the whole game).  Maybe the leader could be either a Wolf, Coyote, or Badger.

Decided to draw a bit tonight for fun. Started out with several rough sketches to learn what bats look like and then drew one mimicking Kyle Ferrin's style 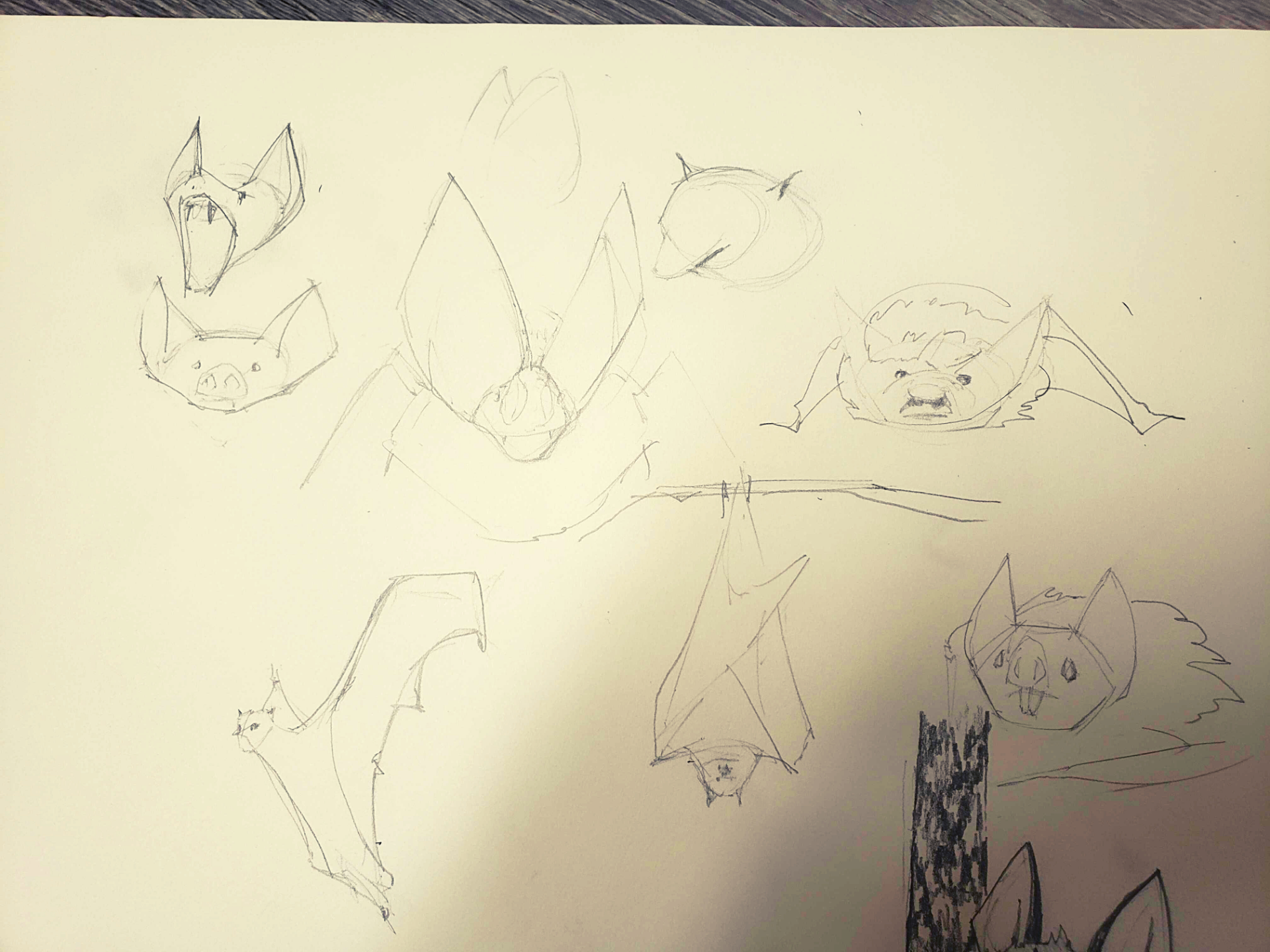 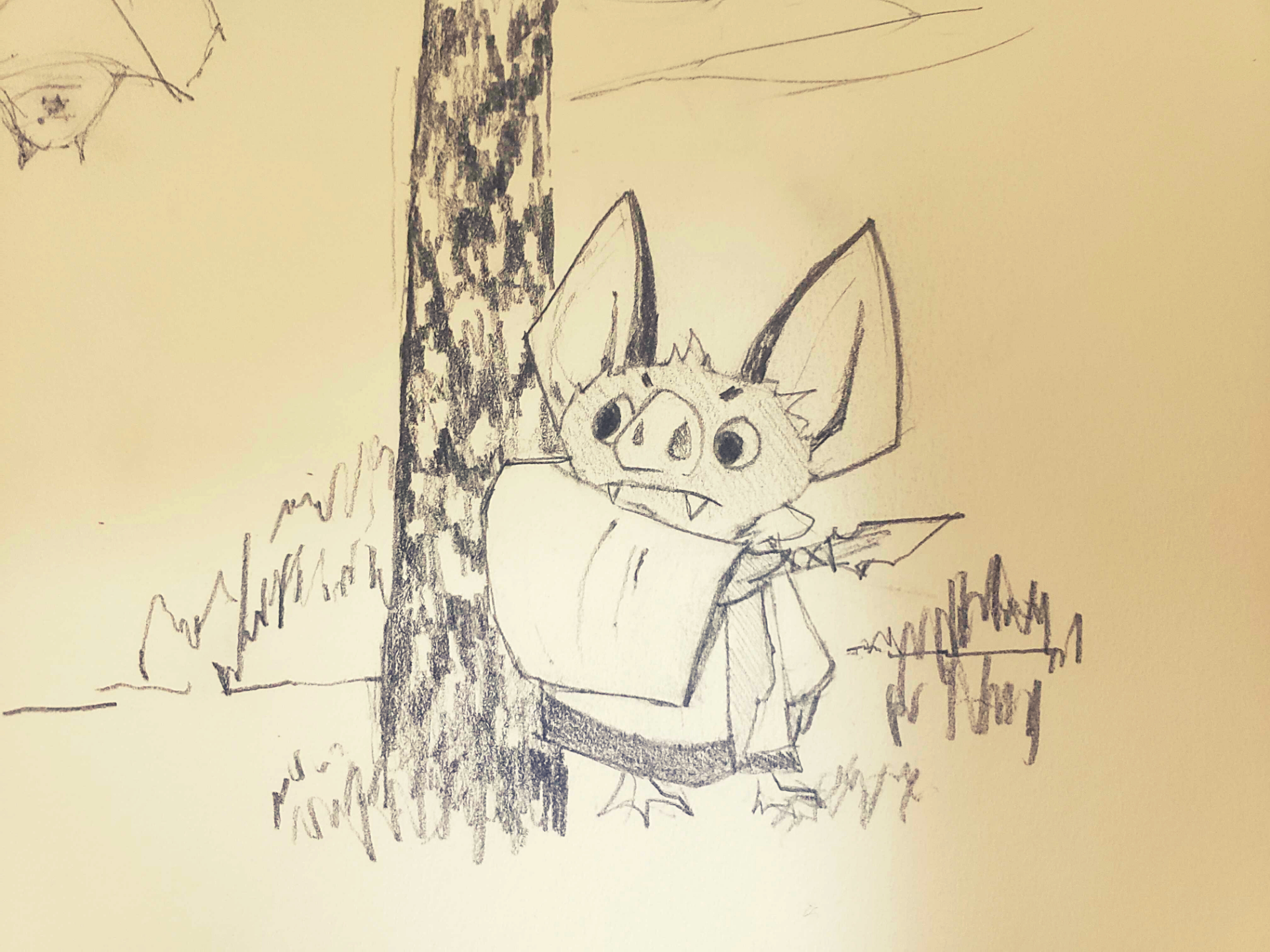 Did a bit too much with the tree, but oh well! It was fun.

That's very cool! Good work Phil, I can imagine a fun piece of art of a bat wrapping another captions creature up in its wings whole a second bat lifts them both off the ground up towards a tree fort to represent the capture move

This is awesome!  I especially like the cloak and dagger look hiding out behind the tree given the personality of the Faction.

Very cool idea, I think I remember the thread you are referencing, were they going to be bats? Do you have thoughts on how the would score? If they aren't going to rule any clearings would they be these kind of roving bands of warriors just causing havoc with everyone else?

I like the idea of someone just acting in between turns, and imagine it could speed the game up as the Midnight Mayhem player would just be added on to the end of each turn but not have to do lots and just focus on one part of the board.

Bats were my first idea, and while I still would imagine them as part of it, I'm seeing it more now as a coalition of nocturnal animals.  Maybe even animals that don't see like they would work together but since they are pro-anarchy they see the wisdom in wreaking havoc together.

Hmmm! Interesting indeed! What animals would you use to represent this faction?

See above for my answer.

Some comments/questions after reading through it a few times:

I'll just leave it at this for now! Cool ideas Scott!

These questions were really helpful by the way, thanks!  It's giving me a lot of direction to think about.  I have a feeling I'll be working through this for a while but it'll be fun just for the process.

* So for movement I'm only thinking in terms of the rules that apply to everyone (except Corvids).  That either your faction rule you departing or destination clearing.  So for instance the Eyrie decree has no impact on Mayhem's movement, only if they could make a legal move based on the Rule or Foot.

* My initial thought, is yes they would need at least one unit there, that could change with play testing.  Upon thinking about your question I'm wondering if there is a scoring possibility there.  Maybe if you need to remove 2 warriors to build a fort you get a point, but you also get a point when it's removed.  So the attacker has to decide if it's in their interest to attack you because they'd be giving you a point as well, a bit more anarchy involved?

* I've thought of the impact on smaller factions (this could present an interesting table talk situation early in the game for smaller factions, because even though each faction wants to rule, they don't want nobody to rule, it could incentivize early temporary alliances).

* That is a great idea, and I will have to think of how that can be involved.  Again this may be a place to create a scoring possibility for the Mayhem.

* If you see above my main thought was bats.  But now I think I'd enjoy a coalition of nocturnal animals with bats as the meeples (sort of like how WA has mice meeples but are really mice, bunnies, and foxes)

Having not seen all the factions this might already exist but I wonder if instead of a assassinate ability, it could be a kidnap/capture ability where if they've built a fort they can capture an enemy warrior. Destroying the fort gives the mayhem a bunch of points but releases your captured warriors. As such the other factions are incentivised to remove the forts immediately as it gives the mayhem points but as the number of captured warriors grows it becomes more and more tempting. Presumably the number of captured warriors might give the mayhem points as well but they lose them when released (but get permanent points for the removal of a fort)

Here is an updated version based on some of what you suggested.

Midnight Mayhem - This Faction Political Personality would be Anarchy (as such they interrupt every other faction to create chaos).

Traits (the characteristics at the top of the board):

Nightmare - All actions take place at the beginning of another factions Evening Phase.

Copy Cat - Uses the current faction for purposes of movement and battling.

Limited - Can not rule clearings.

Actions (remember there is no need for Phases because of the Nightmare Trait) (Take any 2 actions):

Battle - In clearing with pieces of the current faction (you may Battle other factions as long as they have pieces in that clearing).

Tree Fort  - Place a Fort in a clearing ruled by the current faction.  (This would be a token).  Forts take building spots but do not count toward rule.

Kidnap - You may remove up to three of your warriors from a clearing to kidnap an equal number of warriors from that same clearing.  To release warriors a faction must destroy a fort.  When a fort is destroyed all Warriors for the attacking faction are released and given back to that player.

When you build a Fort in a matching clearing you get the VP listed under the Fort space.

When another player removes your Fort you gain 1 VP

Score VP for every 3 Warriors given back to a faction.

I wonder if there could be some way to bargain with the Faction who's Warriors you've Kidnapped.

Ooh I like this idea a lot.  But I could also see this being very problematic for the WA.  I wonder if there is a way to balance it so that it wouldn't totally make it impossible for the WA to play.

It sounds a bit like the Riverfolk only the factions don't get a choice.

I want to answer all these but I need a bit of time.

I did figure out I don't have any ideas on how to score yet, whoops!  Thanks for all the good questions it's got me thinking more about it.  While I doubt I'll make too many custom pieces/boards (I lack the skill and resources) I think I may play test it sometime using the Corvid pieces.

I agree Phil, it would be nice to have factions that differentiate the time phases of the game more. When I was learning Root I was expecting those time phases to have more of an impact on the game, especially with those cool names!