How To Make Foil Peel Alters 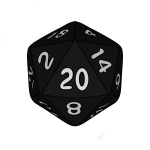 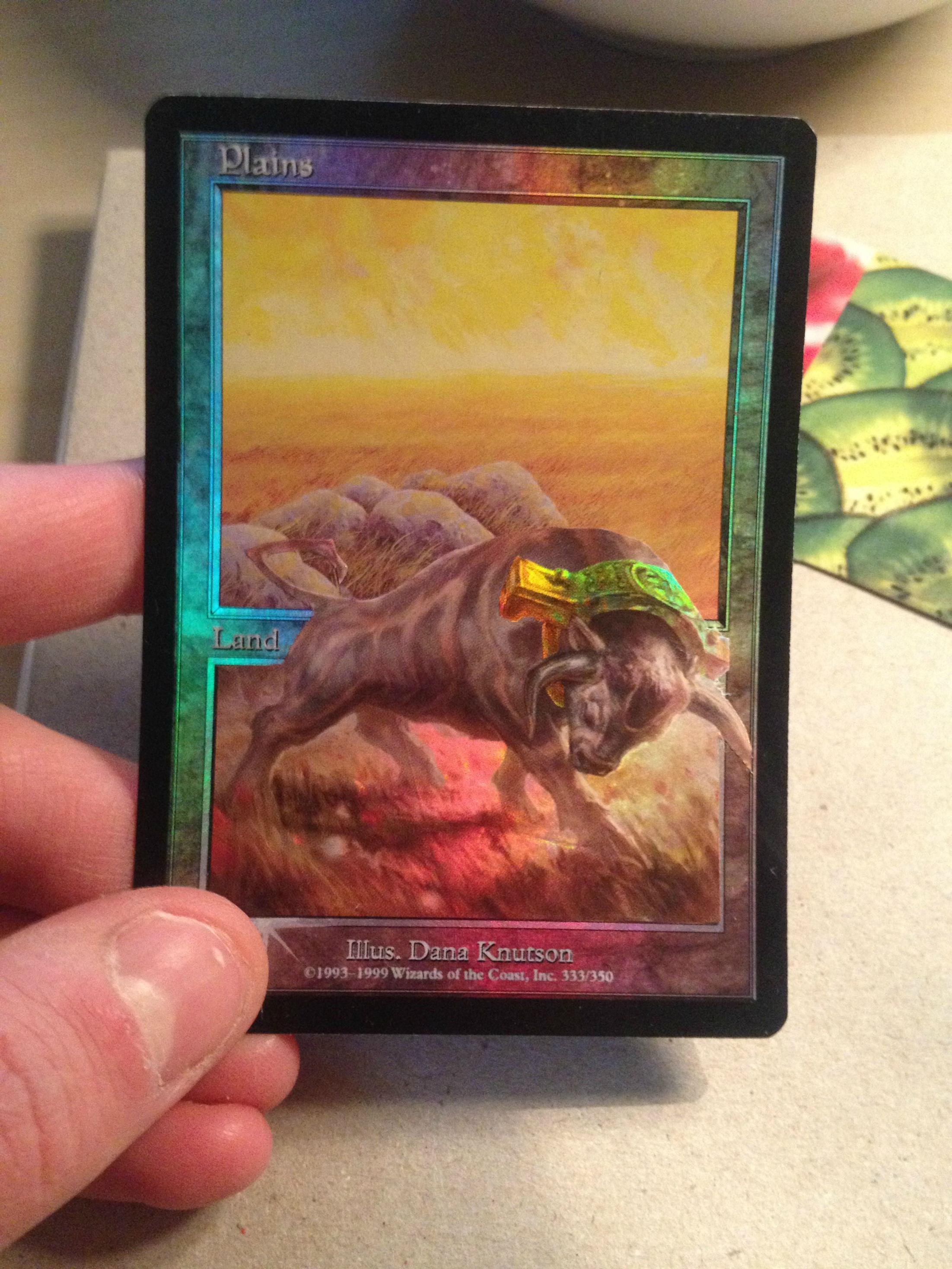 I've seen a lot of foil peel alter guides, but I don't think they've adequately talked about finding art that goes well together. I've decided to write my own. 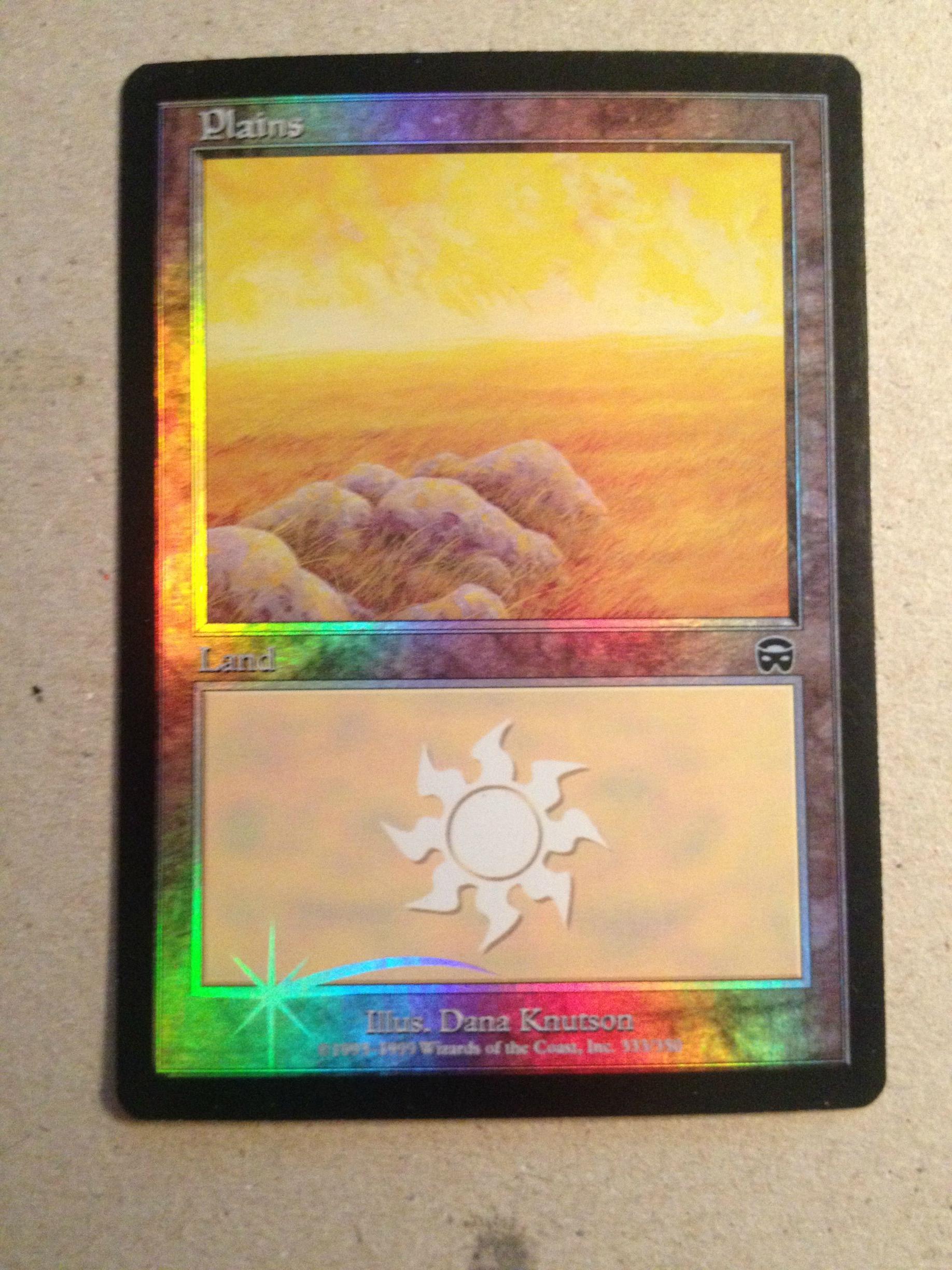 Tools of the Trade

A note about the guide:

I've read a lot of great guides out there on foil peel alters. However, I think there's some important things that they don't really touch on. I thought I'd write my own thoughts and fill those gaps.

Here are all the tools you'll need for making foil peel alters: a bowl of water, a q-tip, an x-acto knife, glue stick, tweezers, razor blade, and ruler. 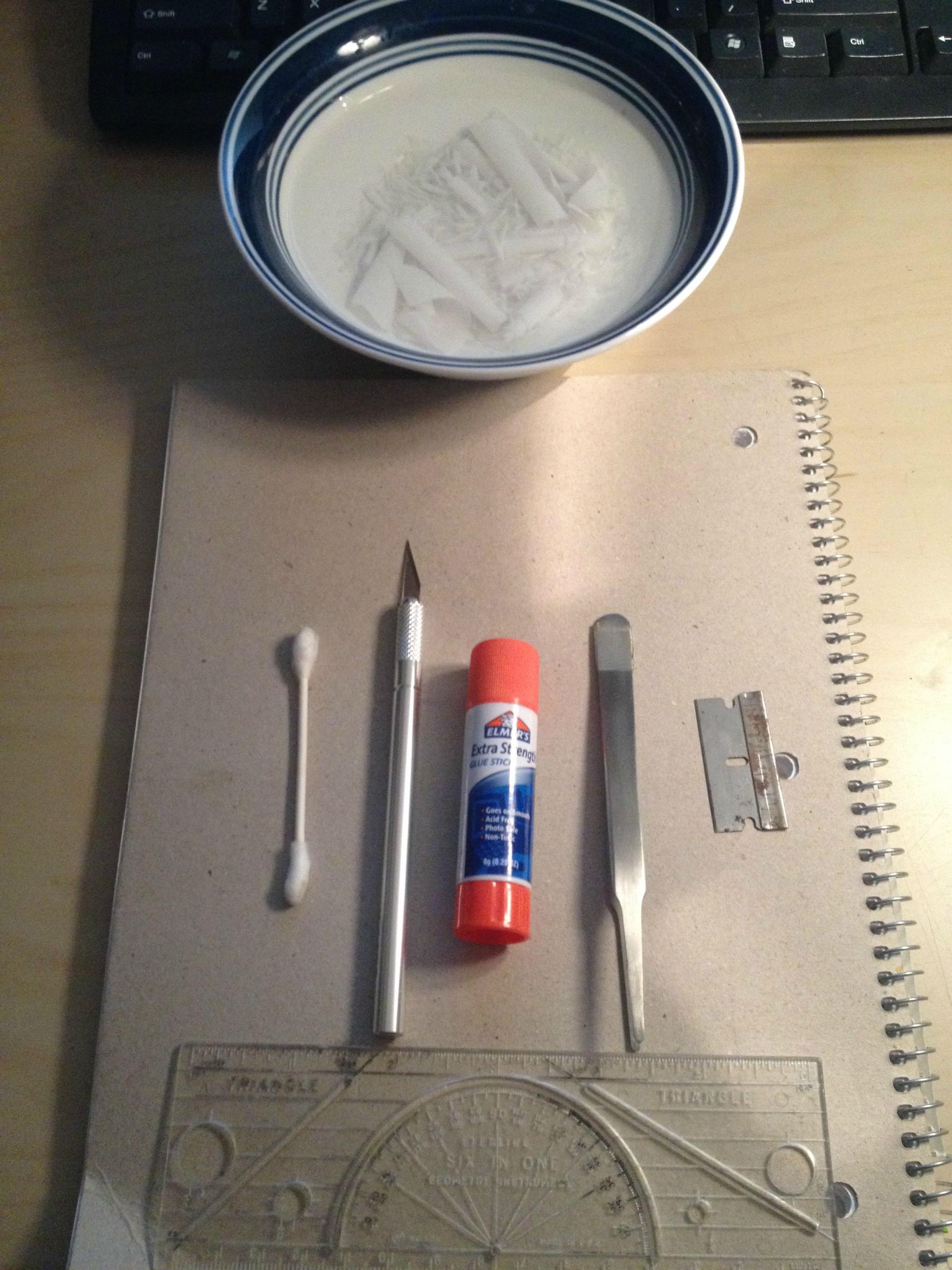 Ok, this is the most important step, and I think it's the most overlooked step. If you want to make a good foil peel alter, there is a lot of thought that goes into it before you even cut your first card.

Let's look at this art: what would be going on in the art, if it were extended further down? Look at the perspective of the card. Would it make sense for something to be down there?

It's going to be hard to match something like this forest.

You're in the sky, and the building clearly extends into the bottom of the card. If you pasted someone on the ground on the bottom, he would look really out of place.

That forest is more obvious, but consider something more subtle: is the bottom so close to you that anything lower would have to be underground? If so, this land will probably not work well. For example, look at this plains.

We're right on the edge of the art, anything down would be below the surface. Unless you're pasting a moleman down there, it's going to look weird.

Now lets look again at this masques plains: the bottom of the card could conceivably extend further down into more grass and not have a discontinuous perspective. Now let's find a creature. 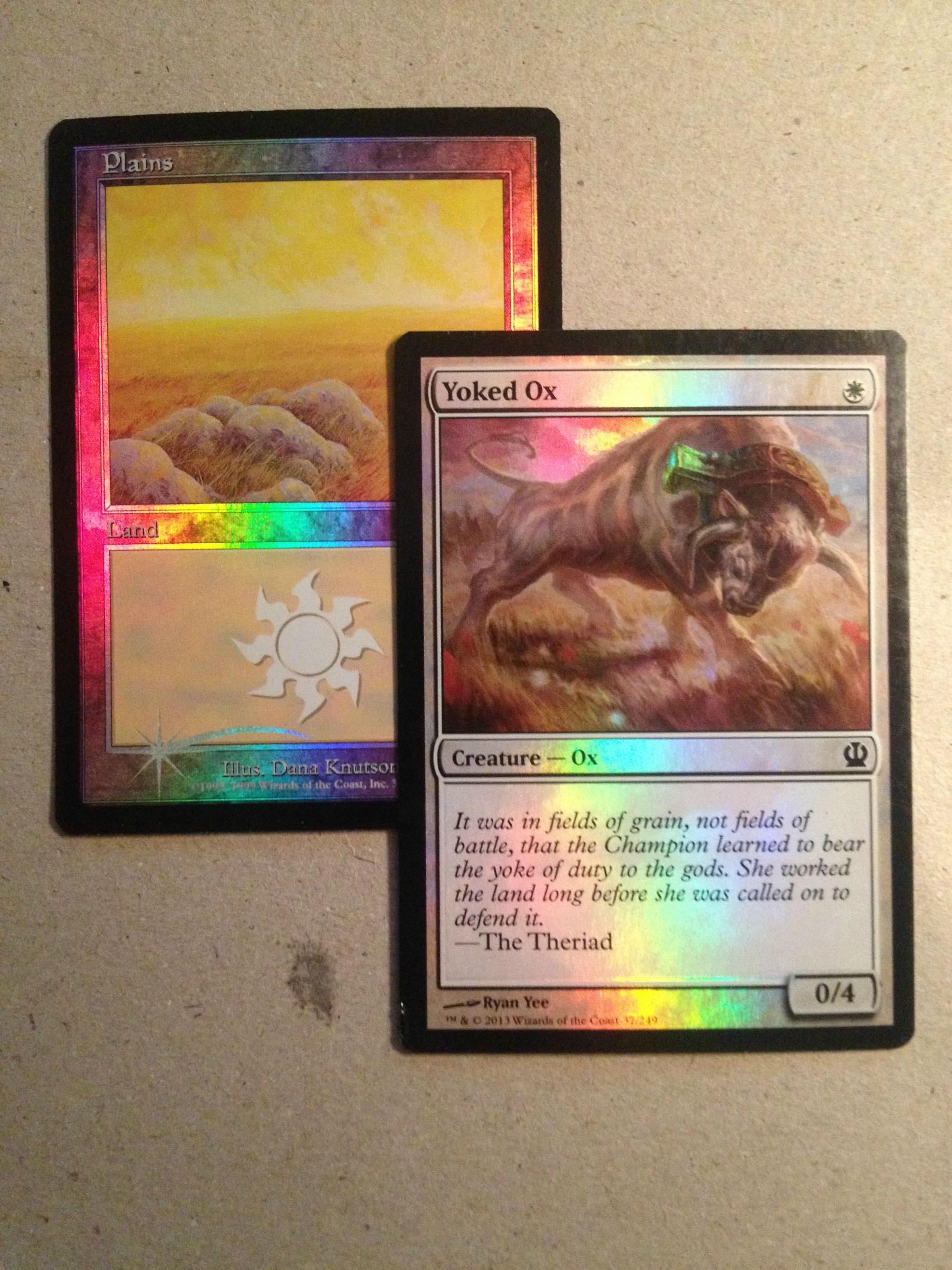 Theoretically you can do creatures first instead of lands, but there are far more creatures than land arts, it's easier to go in this order.

Again, in our selection, perspective is key. Where's the horizon on the card? If it's below where you'd cut to fit it in the box, you're going to have a problem: from bottom to top, you'll have land, sky, land again, then sky again. That's going to look bad. Now let's look at our friend the Yoked Ox. When he's not blocking for days in limited, he's chilling in the field. Notice, the field behind him extends above the border cutoff, so he seems like a good candidate.

Now, let's look at the art itself: is it the same color pallette? Same texture? Same terrain? Check, check, check! Looks like the Yoked Ox is going to be happy in his new home.

Let's look at this swamp: we can conceivably extend the art down. Now, let's look at the trawler's horizon: it's above the line. Look at the flow, if we cut it at the border, the perspective will flow smoothly to the new horizon. If we went straight over the border and merged the arts completely, it would look awkward. By leaving the border, the gap smooths it out and tricks your eyes into making it look continuous. 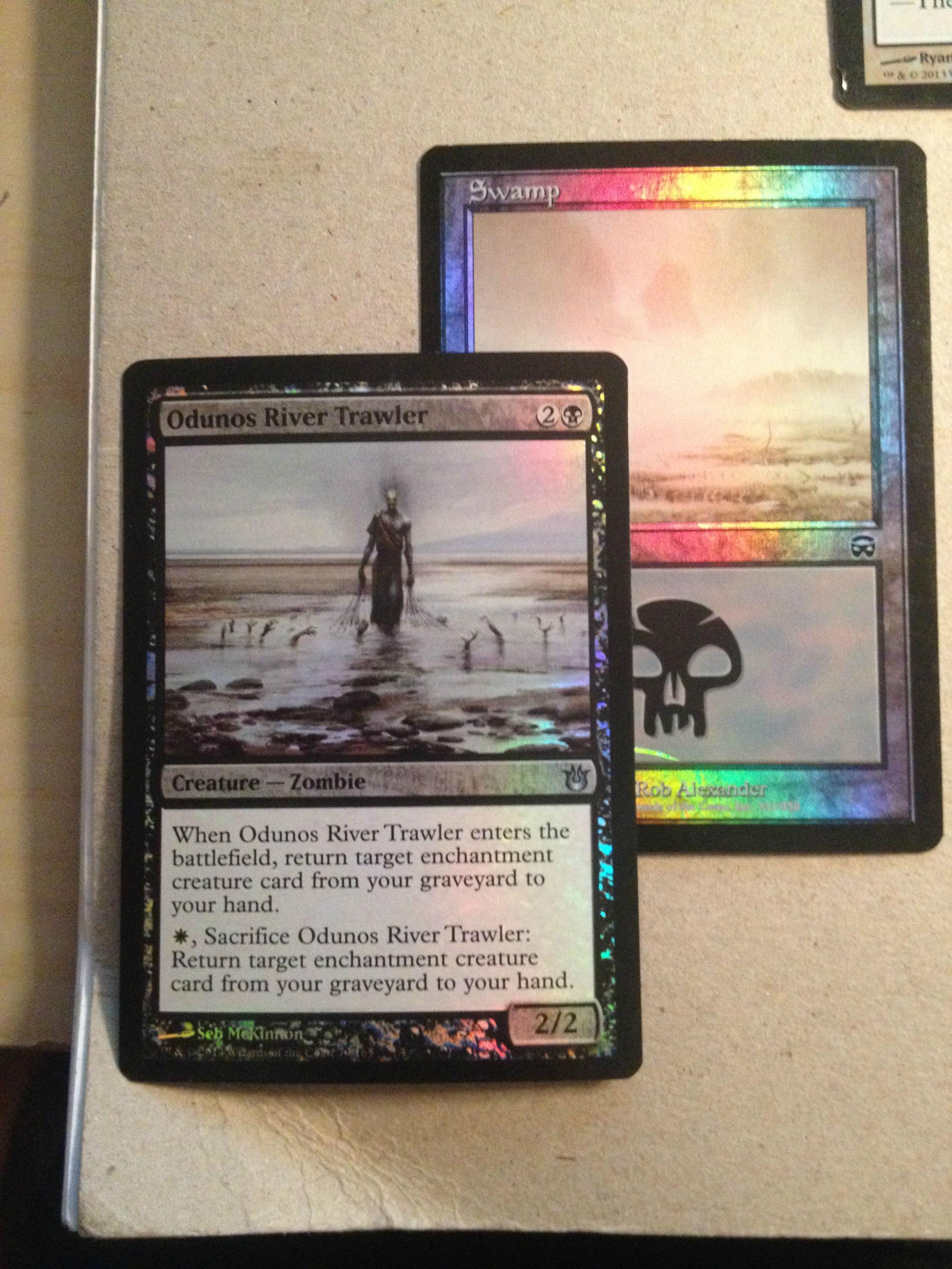 Ok, let's look at this stranger example. In this mountain, the clouds spread down for an undetermined depth. This cat is flying above the clouds. Maybe we can put him in the mountain clouds.... 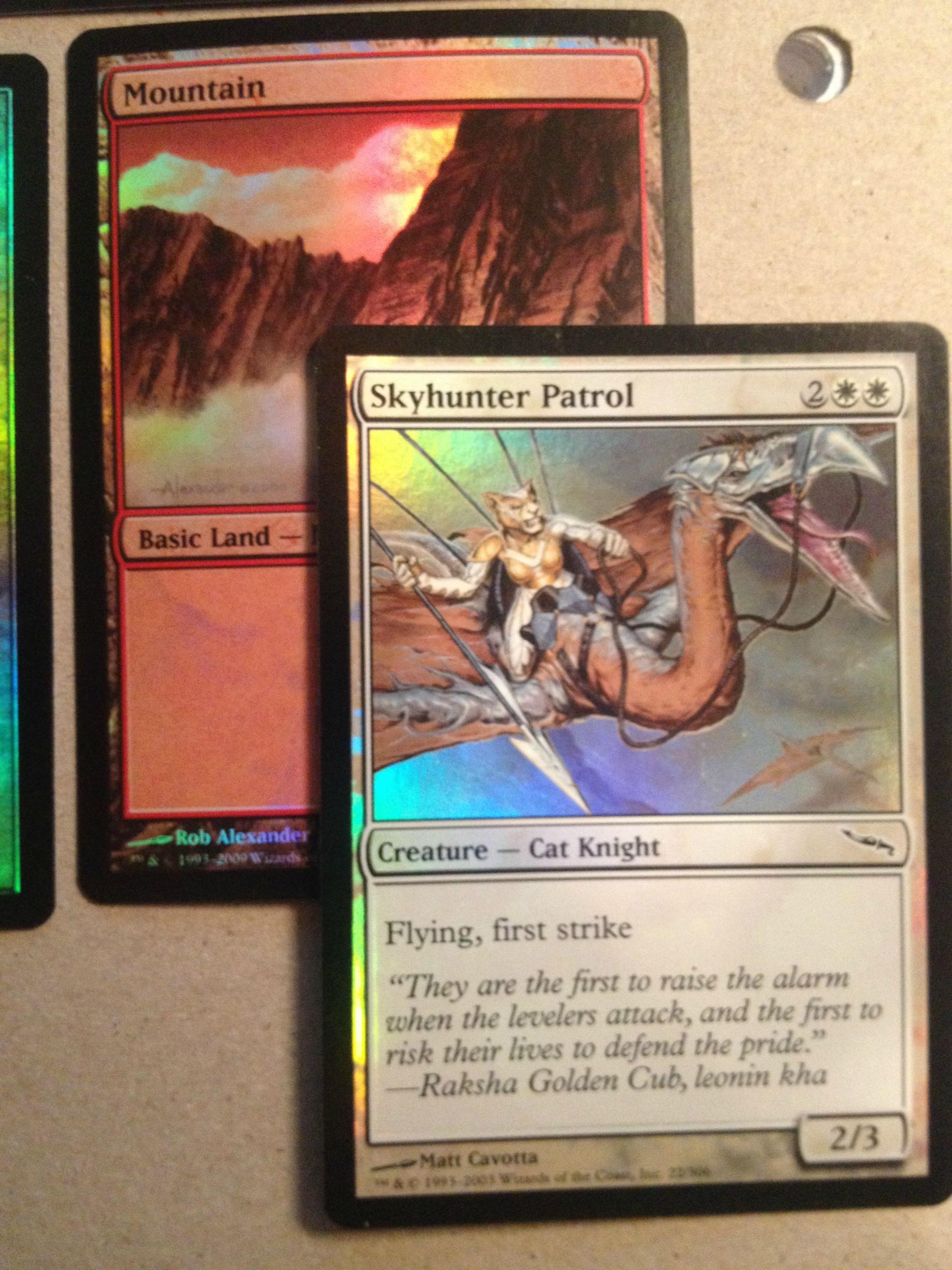 Here we have two good examples. On the right, the marsh our friend is traversing is the same color as the swamp in the land art. This is great. The rock on the right doesn't line up perfectly, but that's ok: here again, the border makes our eyes give it the benefit of the doubt. Our eyes fill in the blanks, making it look like the rock ends in the swamp behind the band. This trick is clear on our fungal friend on the left. 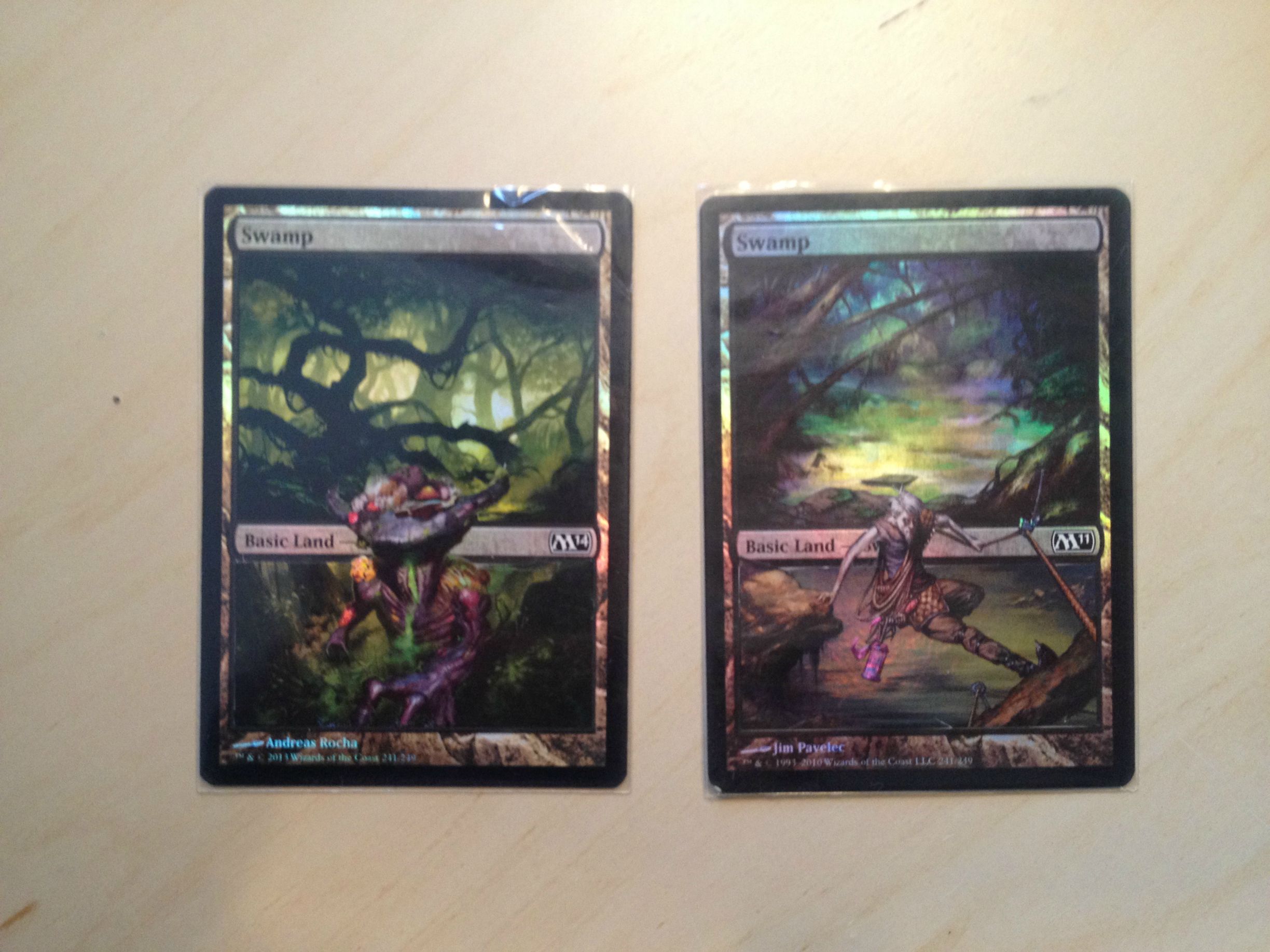 I've found it's far easier to cut the bottom off to start the peeling process. Use the x-acto to make a slice and discard the bottom. 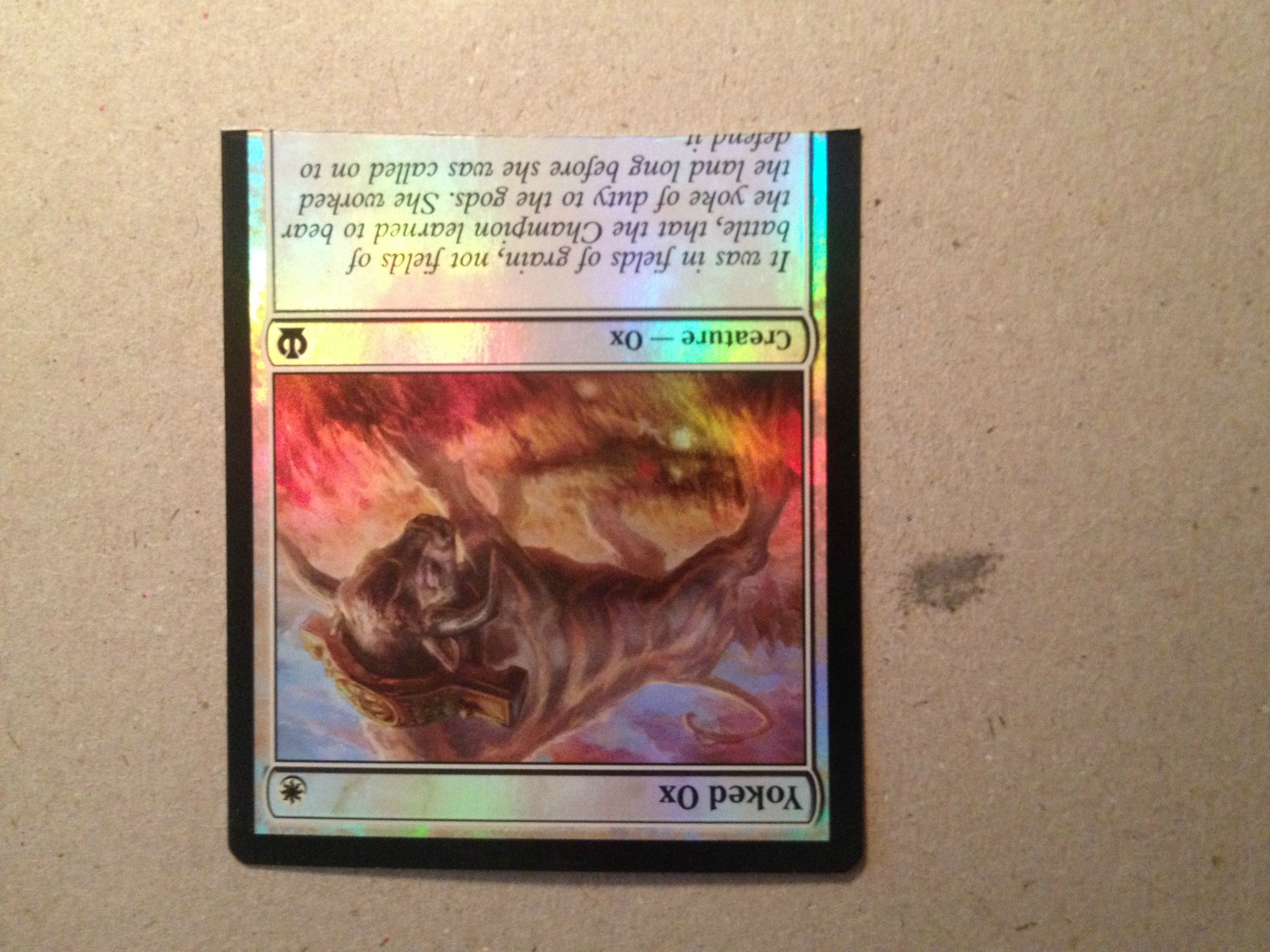 Here we use the razor blade to start the peel. There are several layers to a foil, and we only want the front one. The key here is to just jam the blade in the corner to initiate the tear. You want paper on both sides. 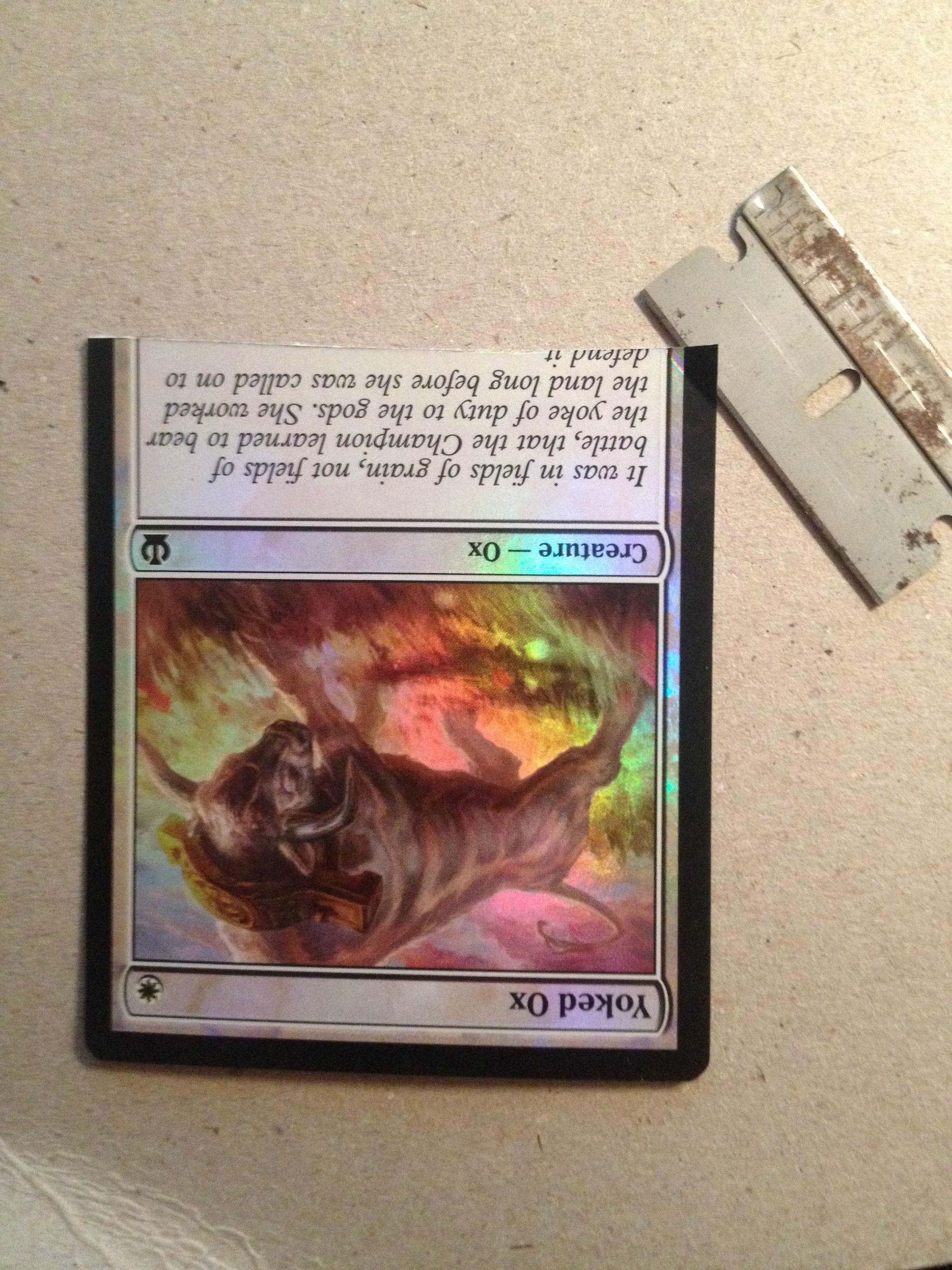 Here we see paper on both sides. This is a good cut. 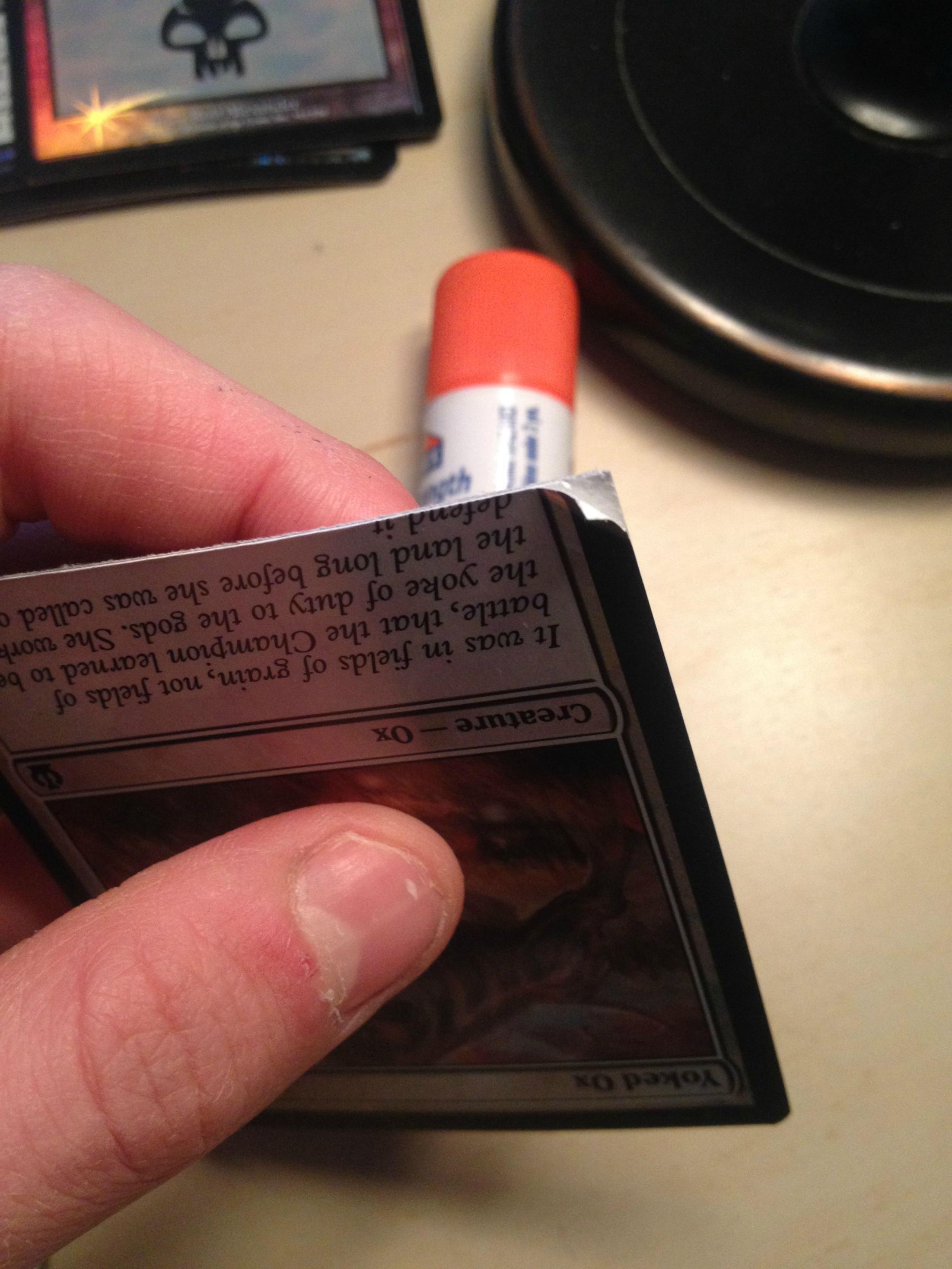 Ok, so here we want to peel with paper on both sides. Go slow; if you start to see a reflective surface, STOP. The reflective surface is the topmost surface, and if exposed will curl and fold our art. The tear here started to hit the reflective layer here on the right, so I stopped and went from a different corner to salvage it. 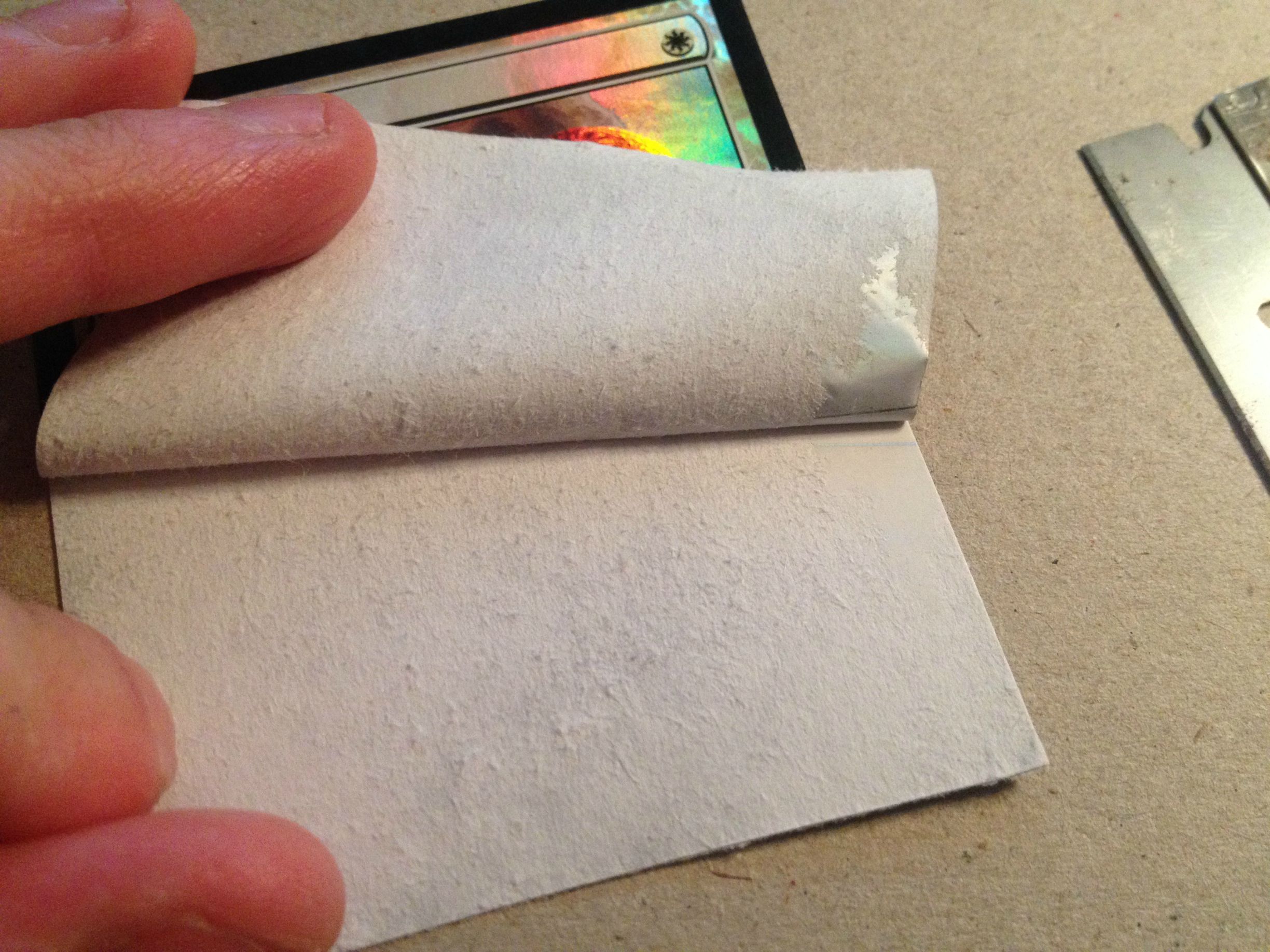 Again, I initiated by cutting off an edge. This is not necessary, but it makes the initial tear a whole lot easier. I then peel off the rest of the front face. 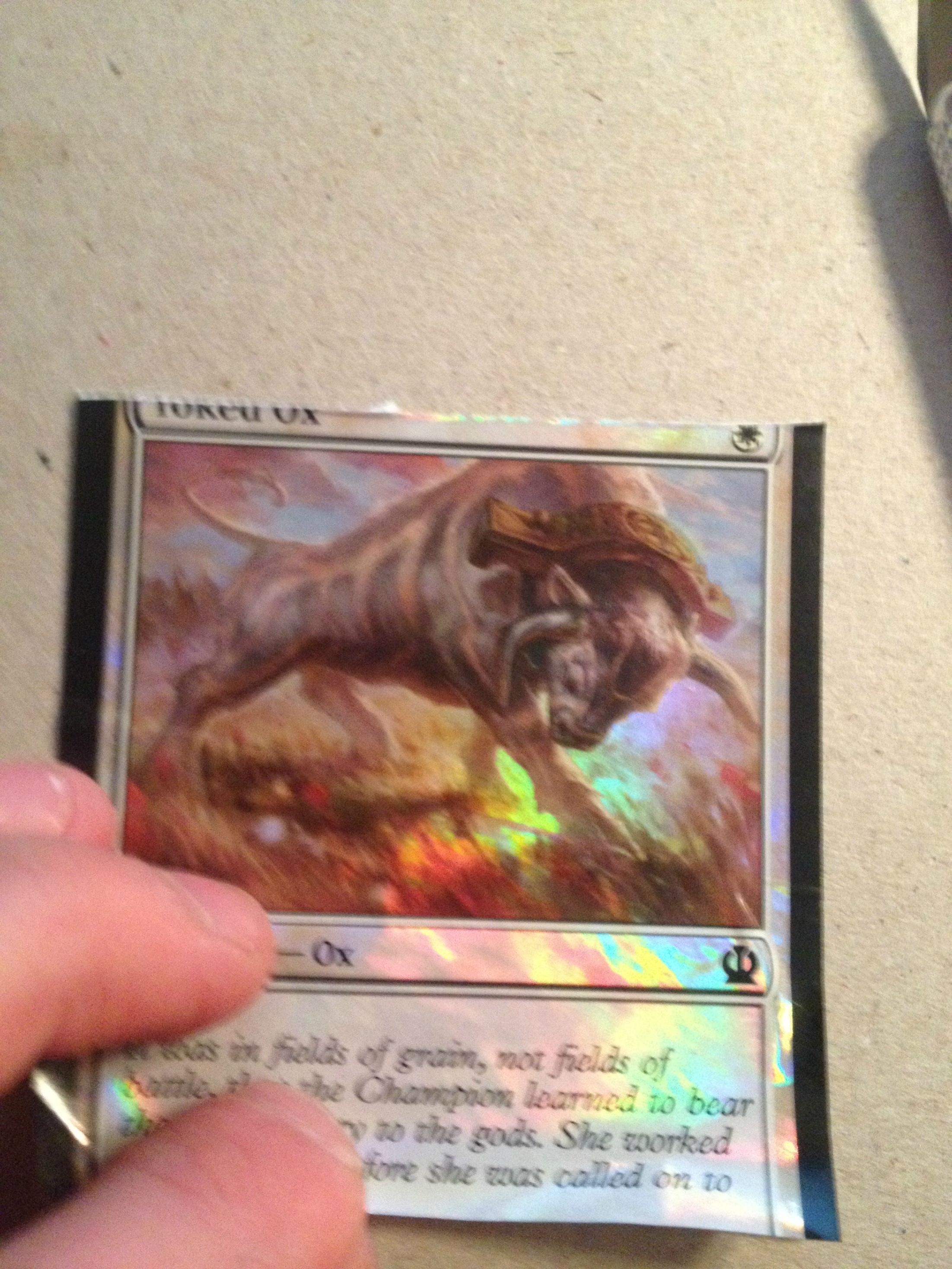 Ok, here's what it looks like. You can see that there are two paper layers, because I came at it from two sides. This is ok, I'm happy with this. It won't fold up on itself, which is important. Paper on the back is your friend. 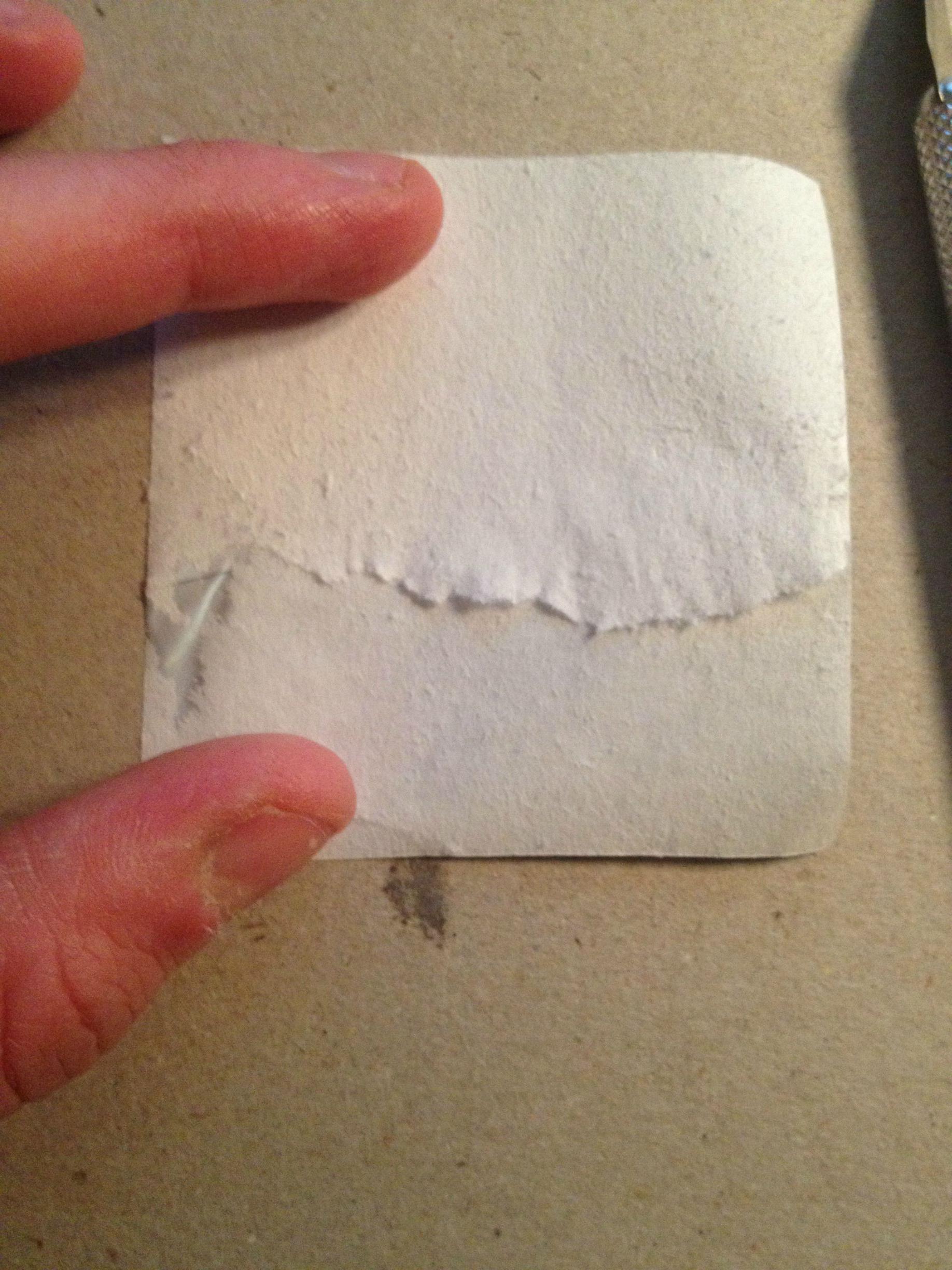 Put the whole face in the water and let it soak for a minute or so. Give the paper time to saturate 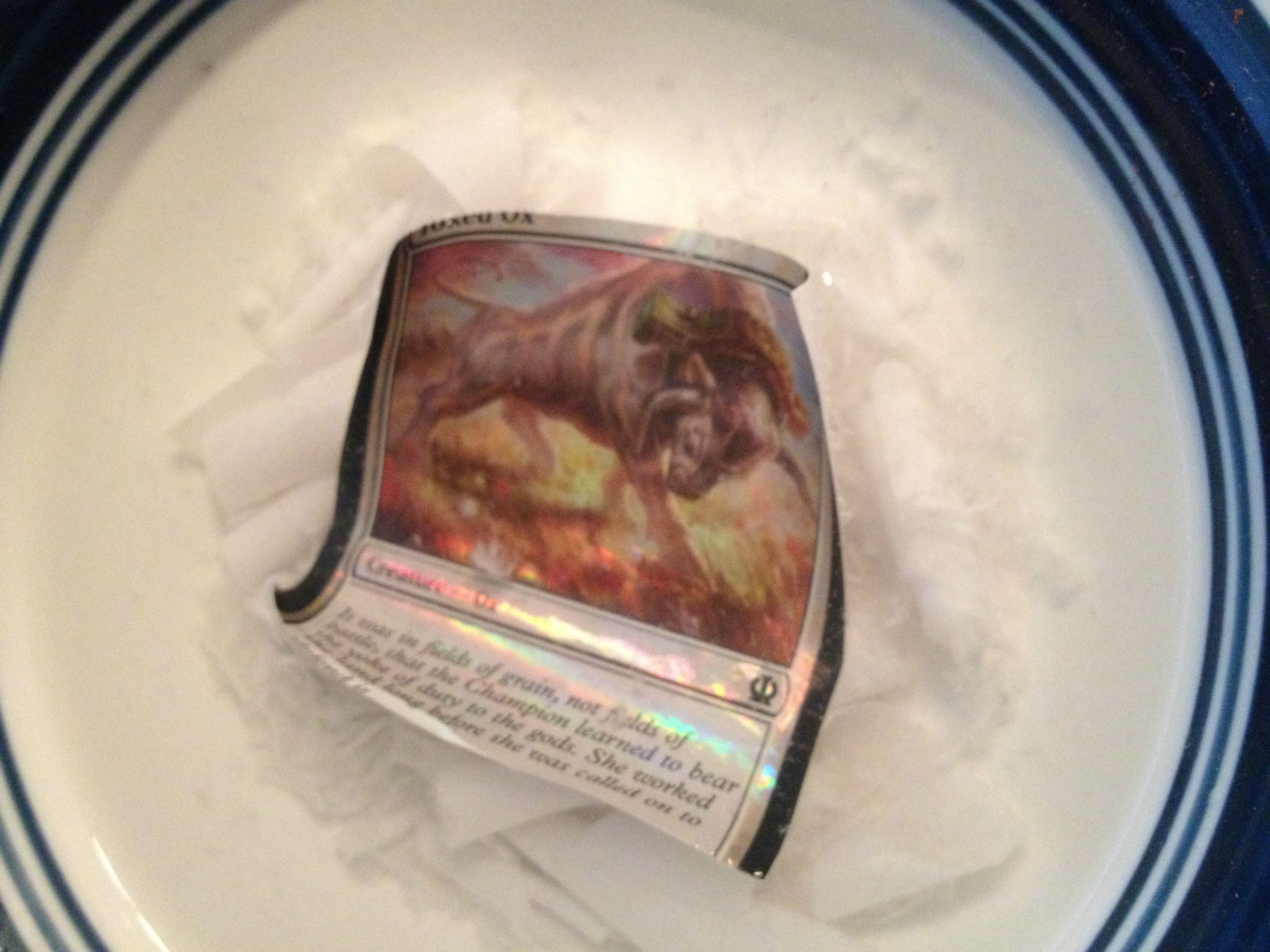 Ok, the paper is soaked through, now we can use our fingers to rub the paper off. Try not to manhandle the front of the card too much, as it can be fragile and the ink can scrape off. Sometimes the paper comes off in one big sheet, sometimes it takes elbow grease. It depends on soak time and paper depth, I suppose. 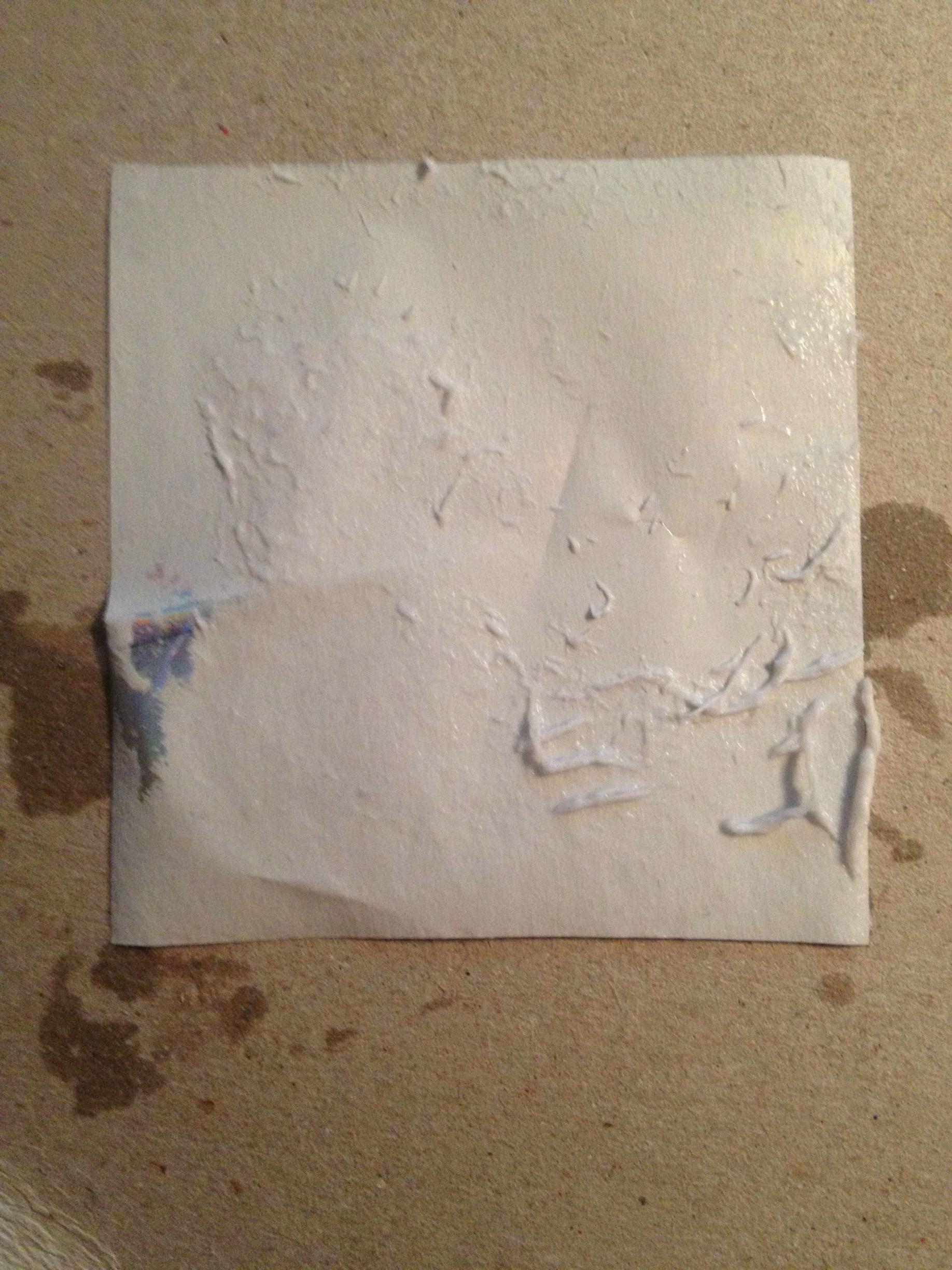 Here is what it looks like once the paper is removed. As you can see, I have a small section that the foil is visible from step 5. Fortunately, most of this is on the border I will cut off, so it shouldn't be a problem. 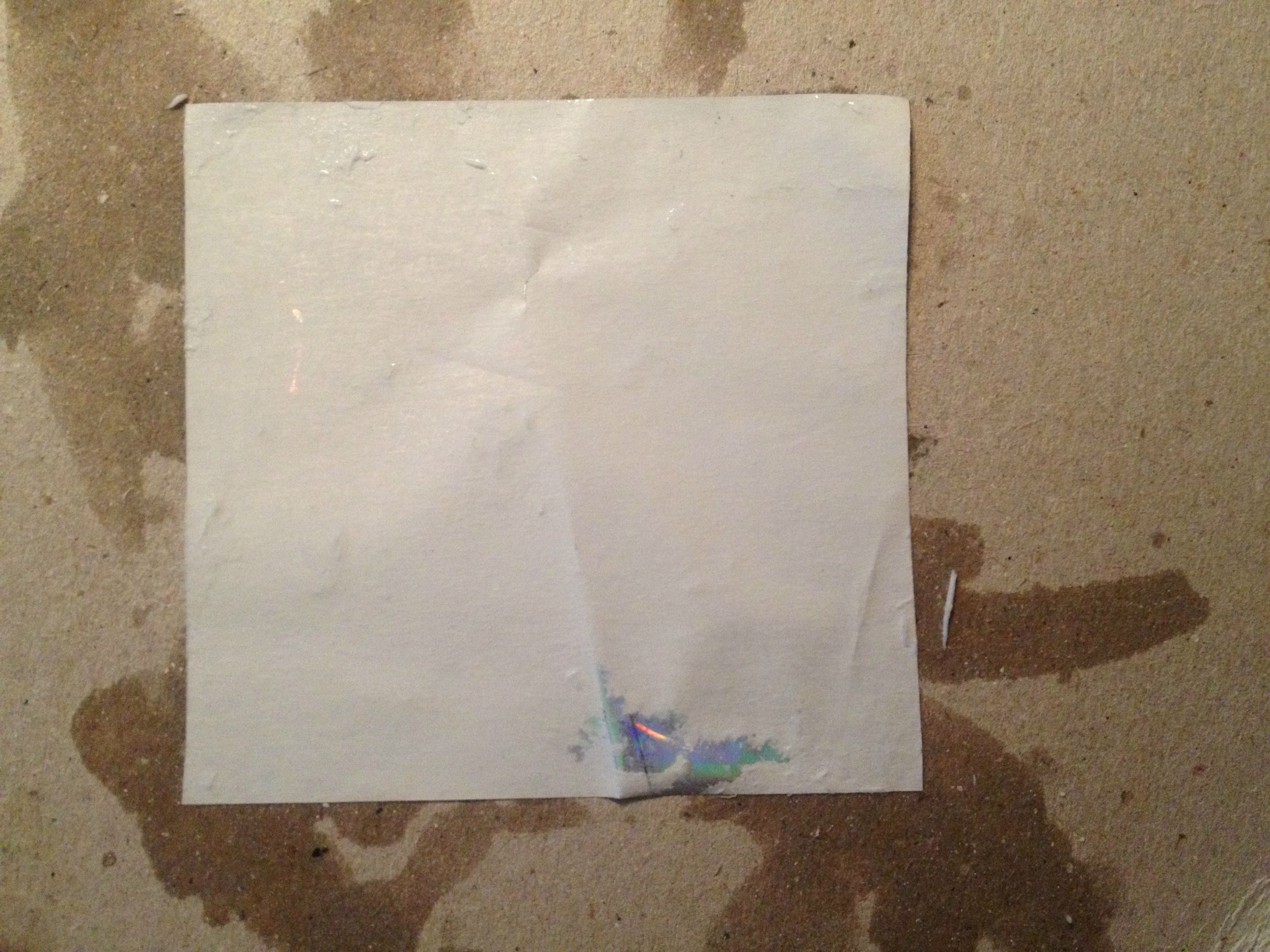 Dry the card. It's time to cut it to size. Use the straight edge to cleanly cut the edges off. Measure the width and height of the text box and cut accordingly. Err on the side of too much art, because you can always cut more off. Adding more on is hard.

Note, the x-acto knife is far superior to the razor blade for this process. It's hard to do details with the razor. 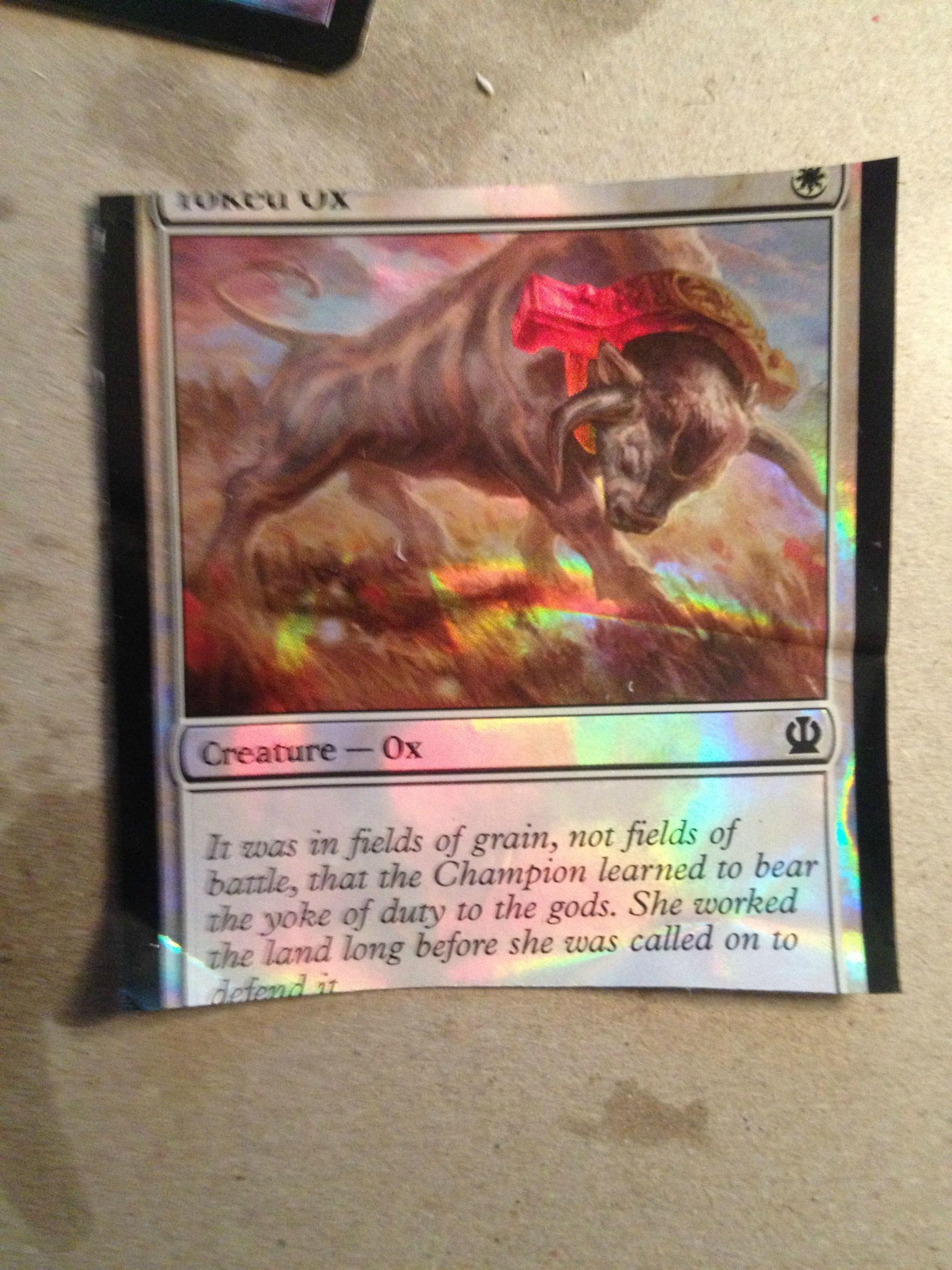 Note, since the land we're pasting it on is old bordered, the area we're pasting our friend the Ox on is not as wide as the Ox. I liked the red flowers in the bottom left, so I trimmed on the right side. 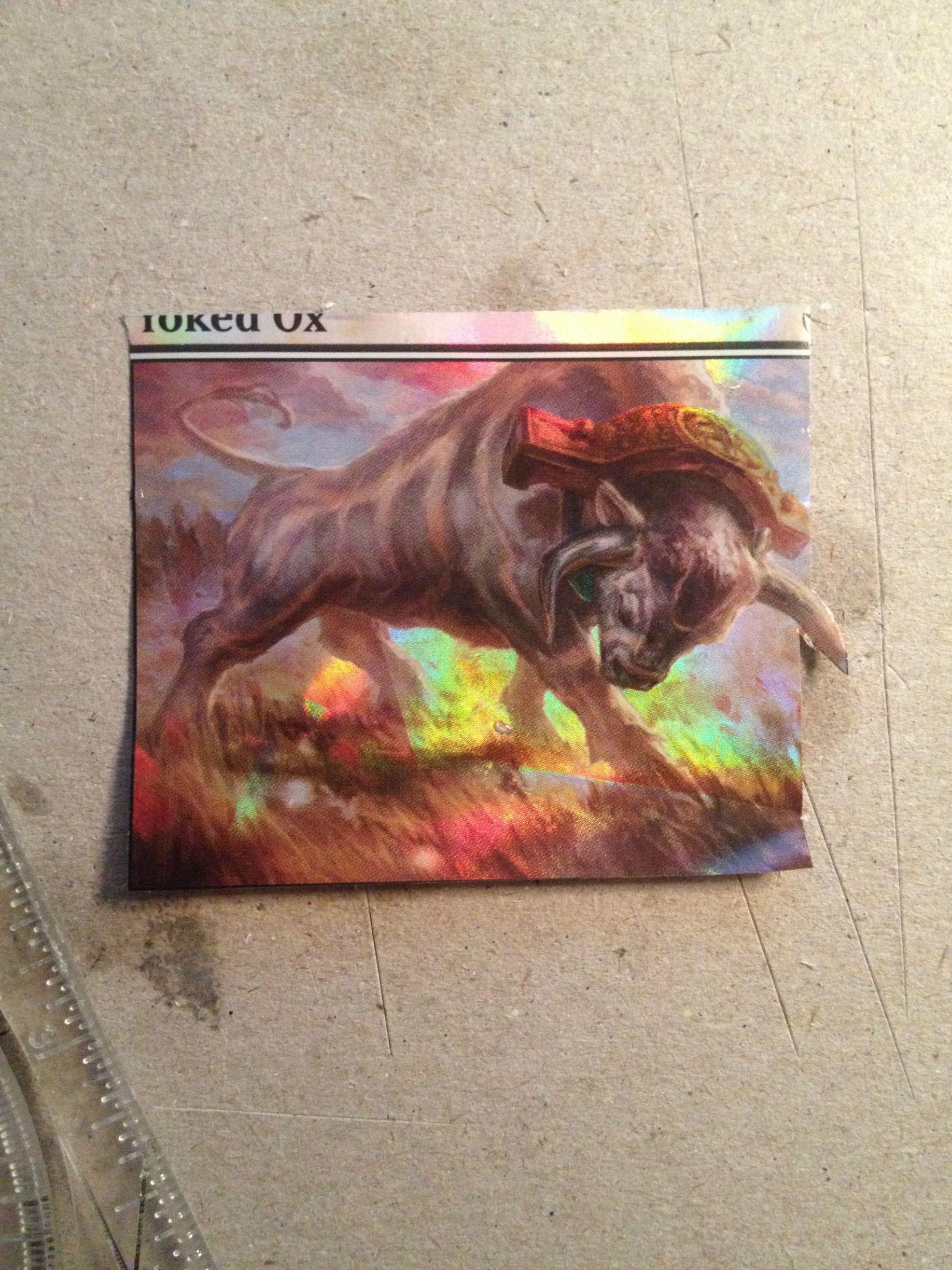 Corners where cuts meet are tough. This ox's tail is very narrow, so if I'm not careful I'll rip it off. Flipping the card makes it easier to see if there's any cut that doesn't link up with another for a continuous cut. Use tweezers to carefully pull small sections out. I recommend cutting in chunks instead of one long cut. Also, avoid sharp corners, as they usually look unnatural. 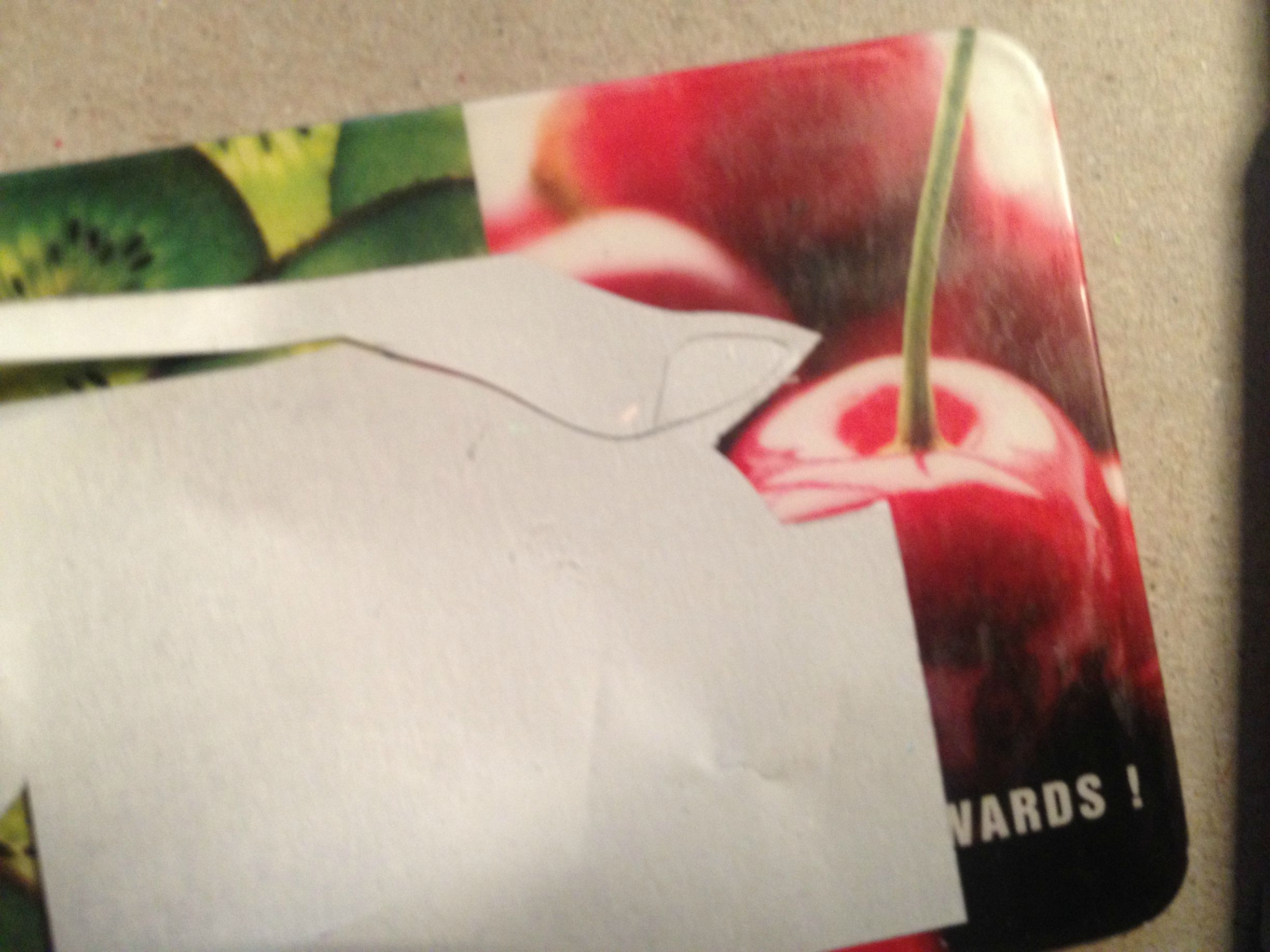 Oh no! Our ox's back was cut off by the top of his card, and now he has a flat back. Maybe we can smooth this out... 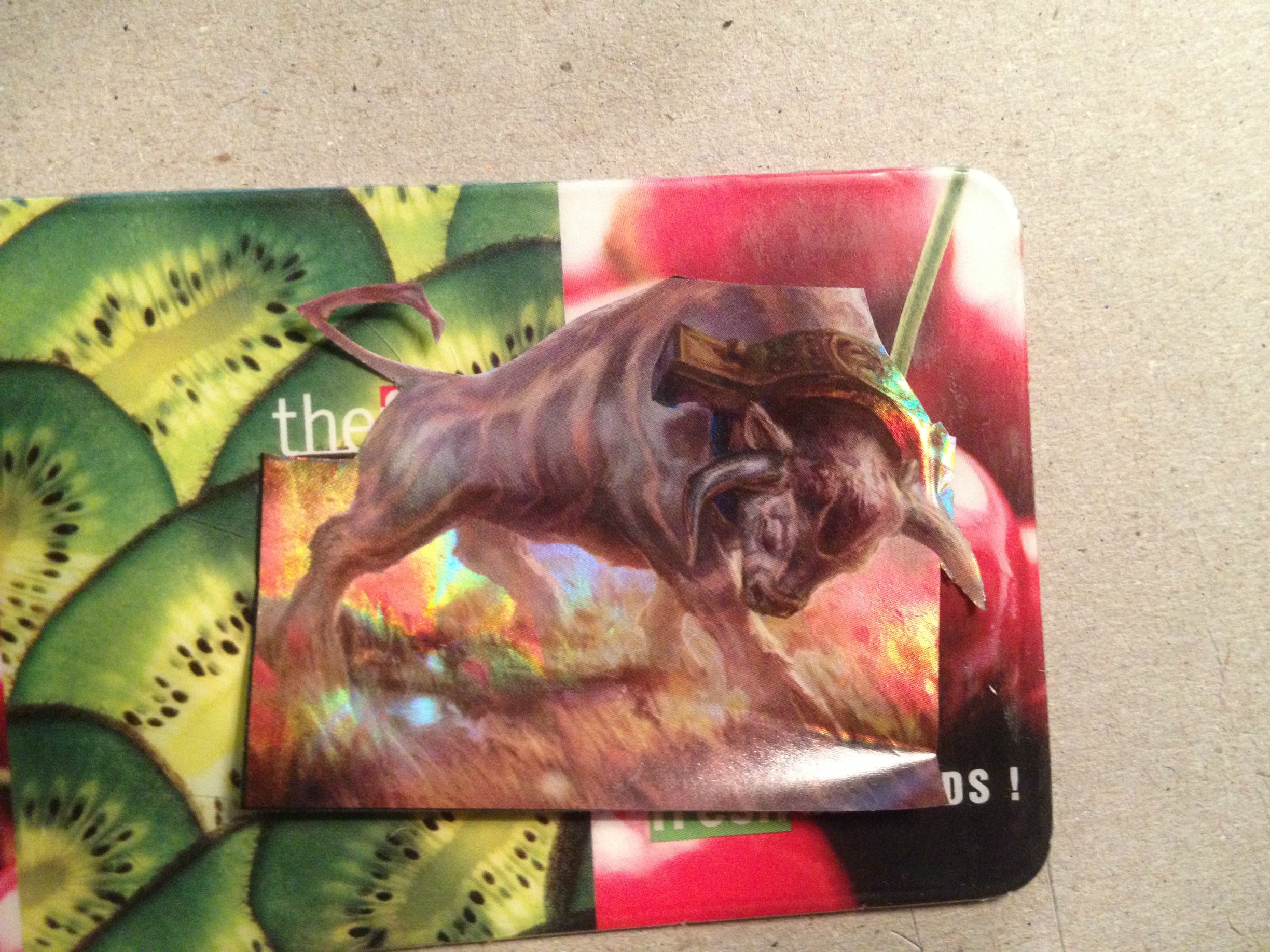 There we go, he looks much better 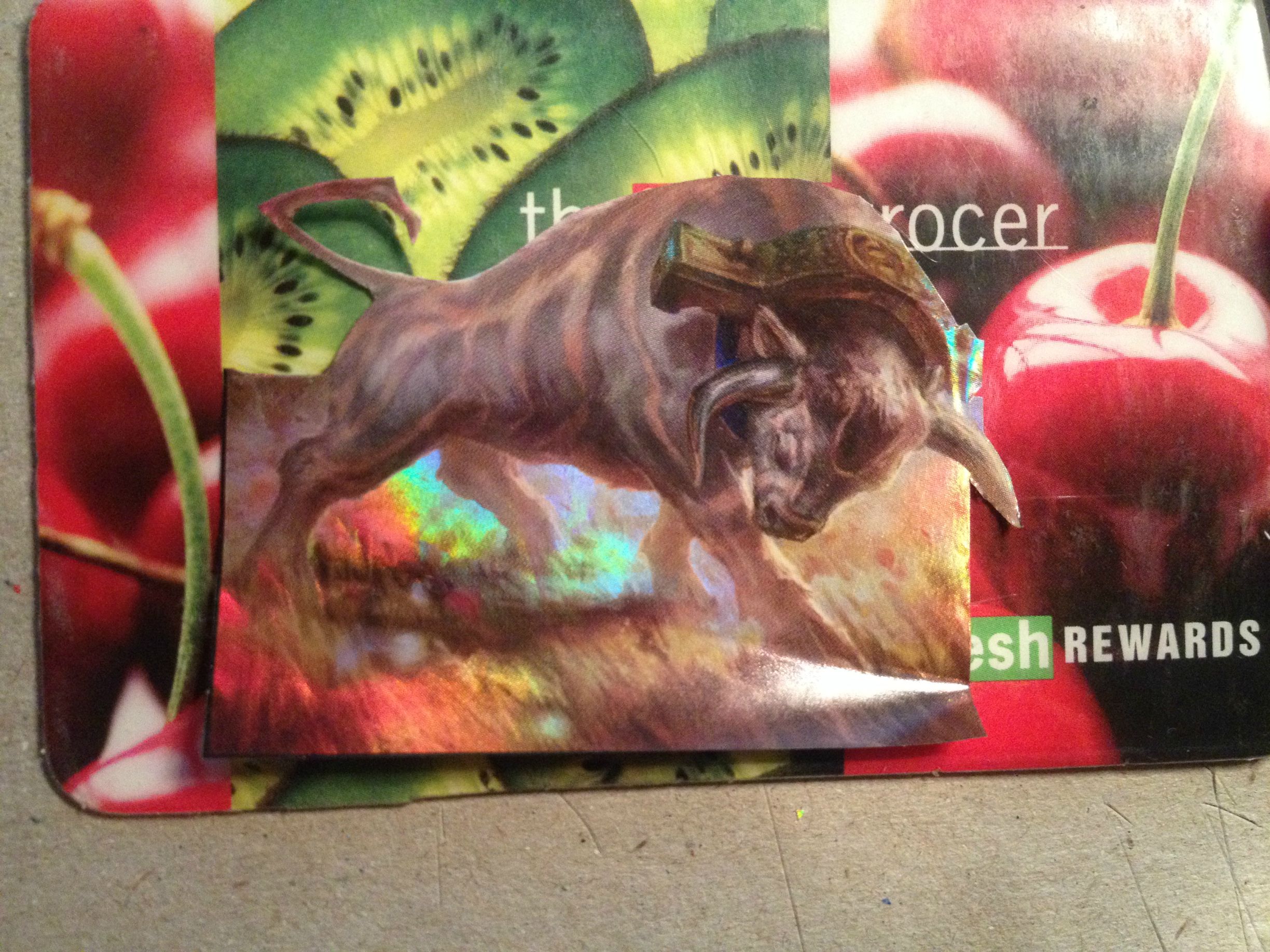 Ok, let's see how well we cut... Make adjustments as necessary to your cutout. 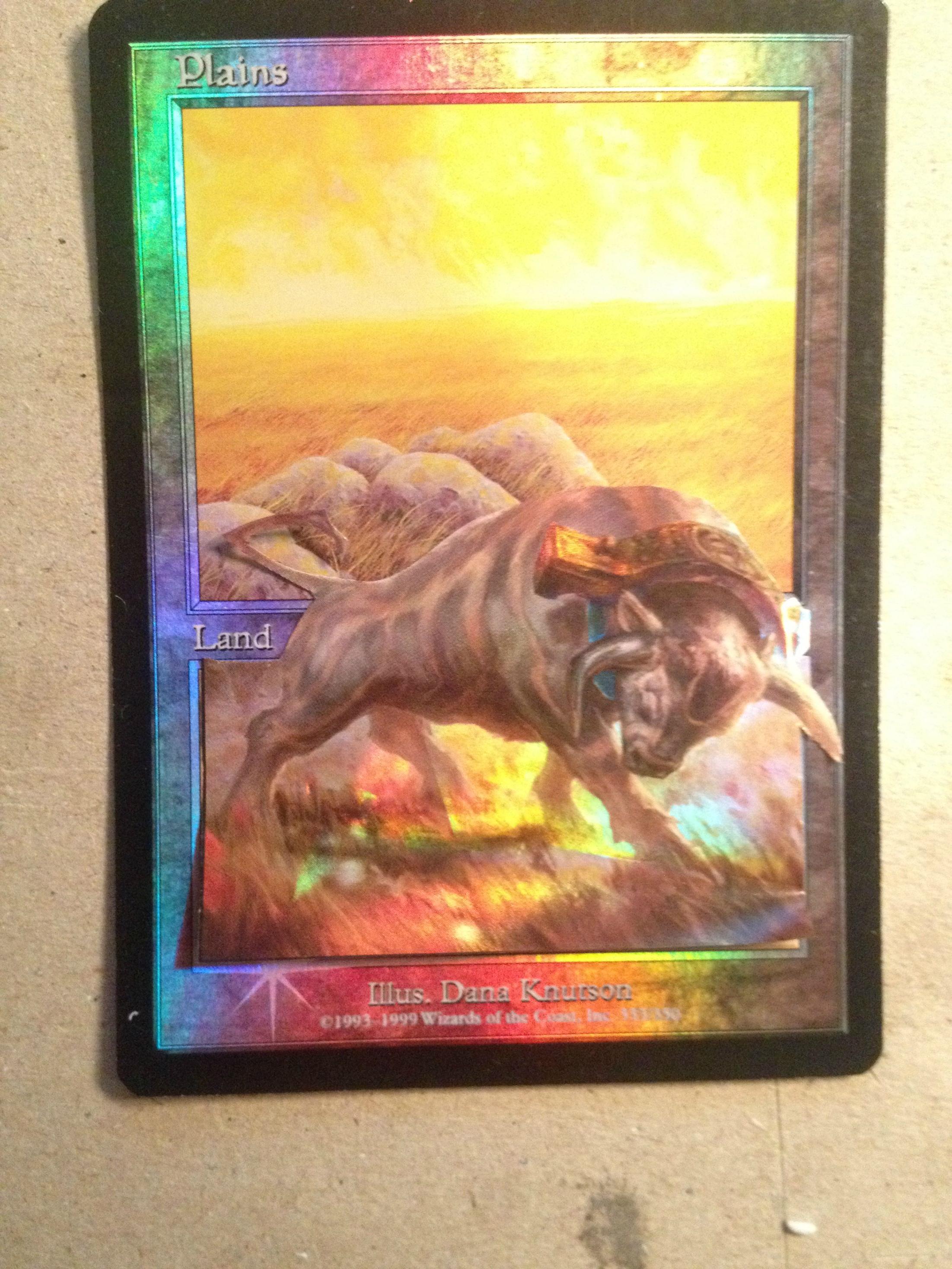 Glue up the back. You can glue the land itself, but that's not ideal because you'll have to clean a lot off later. Be careful with stuff like the tail. Maybe don't paste the tail and wait until the rest is down, then paste underneath it. 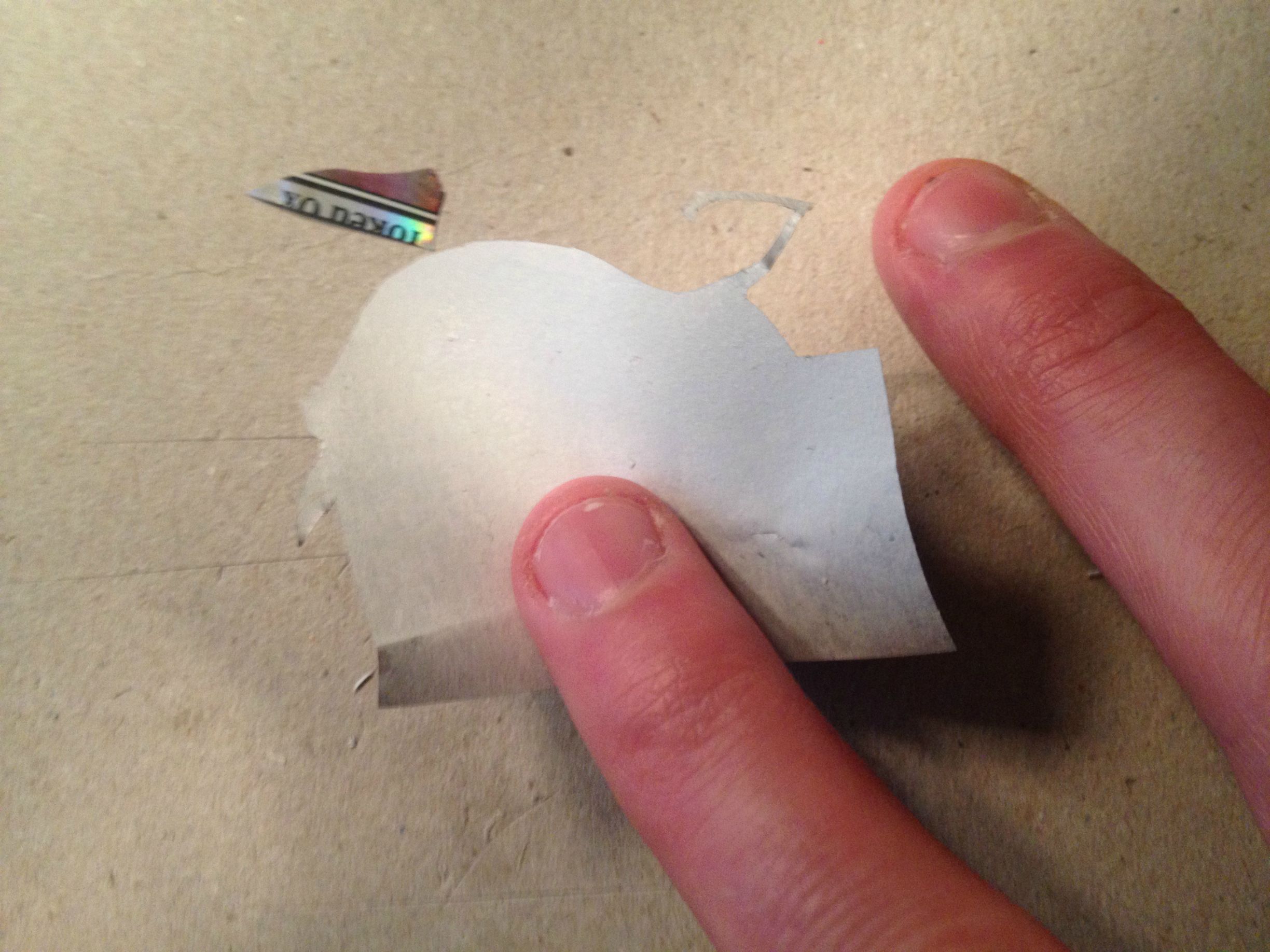 Ok, now put it on the card. Use your fingers or a q-tip to smooth it out. Again, be careful with stuff like the tail. Wet your finger and rub any glue spots that may have gotten on the card. Glue makes it not shiny, and we certainly can't have that. 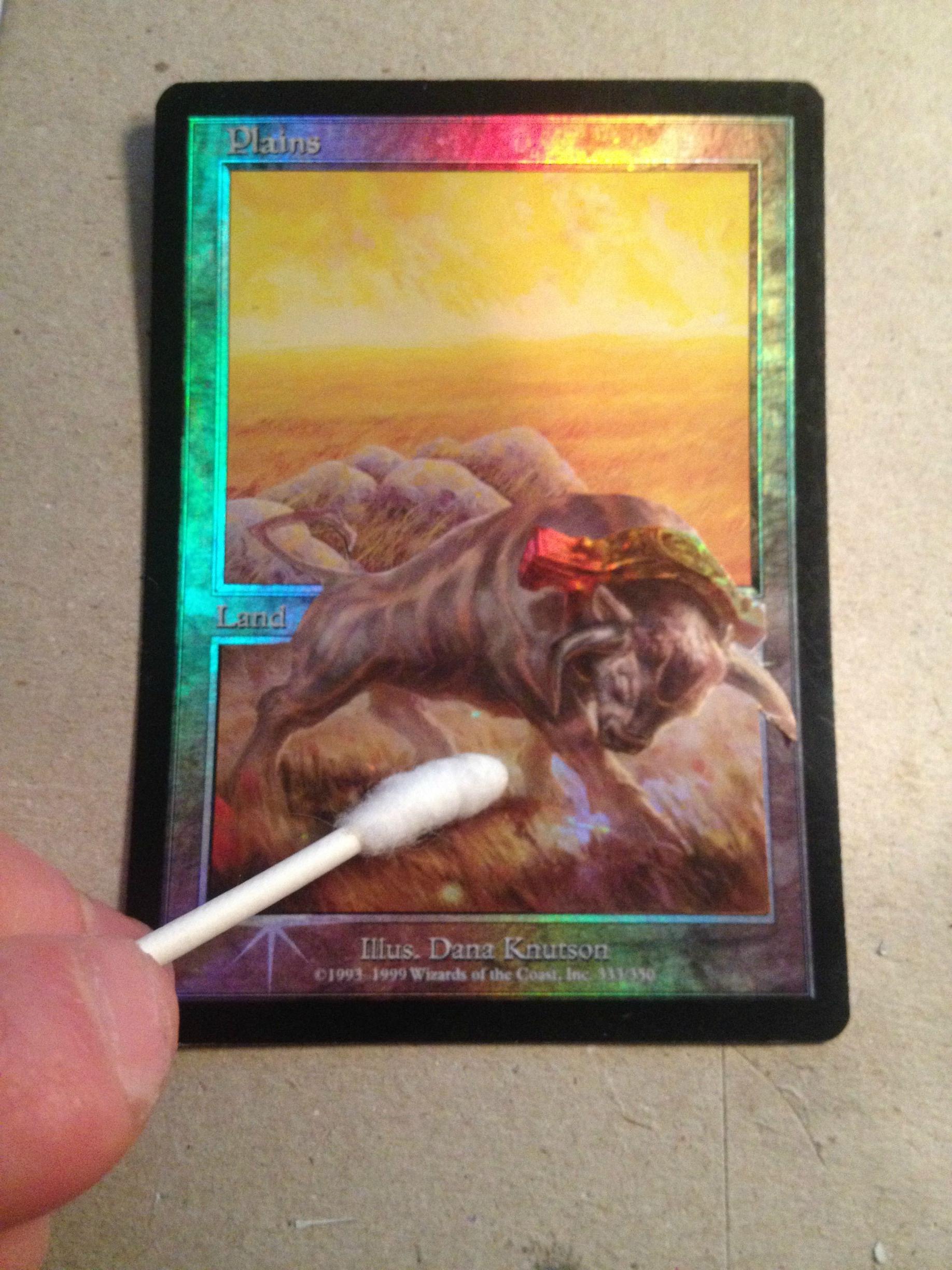 All done! Sleeve it up, I recommend a double sleeve so that the thickness is negligible. Enjoy!