Last Sunday I played another game of #Star Trek: Frontiers. I played solo, as is my wont. I feel like I'm definitely getting better at it. I'm looking at the rulebook less and less. It is just so so good.

On Friday I played a solo, two-handed, game of #Spirit Island. This was my first game playing multiple spirits and it was so so fun. And so I decided to turn it up..... And,

On Saturday I played a 4 spirit game. I'm here to tell you that that  turns the brain burn up exponentially. I don't know, but 4 spirits might be too much for me most of the time. I ended up trying another 4 spirit game yesterday, and lost..... But, man the brain burn is real. Also, it makes it a long game, as in 3-4 hrs long.

I really want to try a three spirit game this week. I don't know if I'll get that done or not.... But once I've tried it at three spirits I want to write some of my reflections on the system as a solo system.

What 4 spirits did you use?

On Saturday I played with the: river, ocean, a spread of rampant green, and bringer of dreams and nightmares. On Sunday I played with all the rest: thunder, lightening, earth, and shadows flicker like flame.

I played #The Quacks of Quedlinburg a couple of times with my daughter. She absolutely crushed me every single time. My hands were like magnets to those pesky white tokens.

We also played #Camel Up (second edition). We started experiment with some alternative rules for the wild camels so they could have a bigger impact on the game.

I'd love to hear what your family comes up with on the crazy camels. They played a very minor role in our first play so I was a little disappointed. Still a lot of fun though. And darn those magnet hands lol. Love the tactile fun in that game.

That is totally rough especially when your bag is full of lots of good stuff!!

Even though we are under a shelter in place order, I find I have less time to game than ever. 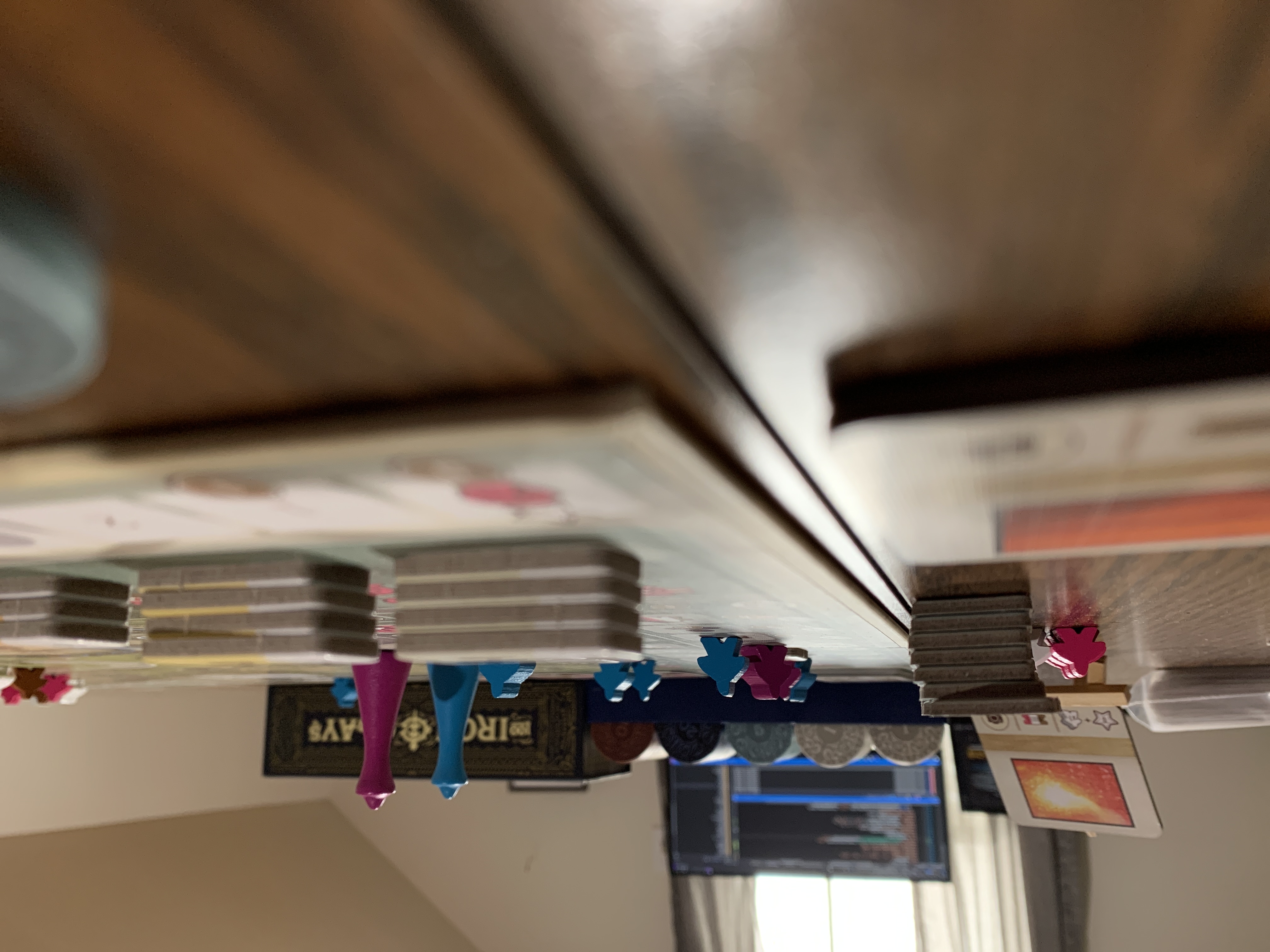 Wow, when you say day 4, do you mean that the solo session takes a longgg time to finish?

Yeah, what Marsh said haha. A solo game takes a little over an hour, I just have no free time

Ah, gotcha. That's hard. What's your favorite game to solo? I don't think I ever got to ask you.

Yeah, it’s all good though. There’s a season for everything.

Definitely #Pax Pamir (Second Edition) right now. Though I have so many great games it’s hard to choose what to play sometimes.

I still want to try this one.

Vital puts all his games on Tabletopia. The Gallerist in particular works well there as it’s not terribly fiddly.

Yes I know. I should try it, but I really don't like the idea of trying to learn it on a computer.

Yeah, I feel you there. I think if you checked out Heavy Cardboard’s teach/play through and then tried it, it wouldn’t be too bad. The game is relatively straightforward mechanics wise.

some friends and i played #Porta Nigra and #The Binding of Isaac: Four Souls on TTS both games worked well , we were playing until almost 5 in the morning

You like Porta Nigra? I bought it some time ago because it was cheap.... But I haven't played it yet.

honestly i bought it because it was 5 dollars before shipping and tax . I LOVE IT its a great euro game. The scoring can get hectic but once you get the hang of it the game is awesome .

Gad to hear that.... That was what I paid for mine.

#Donning the Purple , did a simulated 3 player game.  Very cutthroat.  Rome did not fall, the emperor died four times.  Twice to assassination and twice to food riots.  In the end the sneaky Senatorial player eeked out a win by 2points.  Excited to try it simulated 4 player with the expansion.  #Donning the Purple: Votes & Virtue expansion I was able to complete the play in about an hour, with interruptions.

#Scythe Digital - got a few games of this in with friends.  I miss #Scythe: The Wind Gambit Expansion but I can live without it for the time being.  Also played one #Ticket To Ride digital game, was a fun time.

Donning the Purple looks like a fun one. I love the theme.

I managed to get in THREE games this week! First was #Dino Dunk, as I wanted to play one last time before writing my review.

Next was #The One Hundred Torii, which my wife and I played yesterday. Man, that's a good game! Very easy to learn, but uses your thinker quite a bit too!

Then last night we played #Treasure Hunter. I was doing terribly all game, unwittingly collecting the negative point tiles, or nothing at all. Then, on the last round, I got 39 points in coins, which jumped me up from last to second, losing by six points (of six players).

It's good to have more than one game played in a week :)

I saw pics of #The One Hundred Torii on your Instagram. I love the way it looks.

Never heard of any of those games! One Hundred Torii looks pretty interesting

The One Hundred Torii is like a mix of #Carcassonne and #Tokaido. It's a really neat game. I'll be reviewing it in the next few weeks, so I'll post a link when finished for everyone to check out if interested.