Check out my Frogs!

Earlier this month, I released my hold at Miniature Market in anticipation of my BoxThrone shelves coming in. In that order was #Cosmic Frog, a game I was introduced to by the So Very Wrong About Games podcast. I played it with a friend on TTS once and knew immediately that Sarah would hate it, but I had to pick it up anyway. And of course, now that it's here, I really wanted to paint the frog minis. 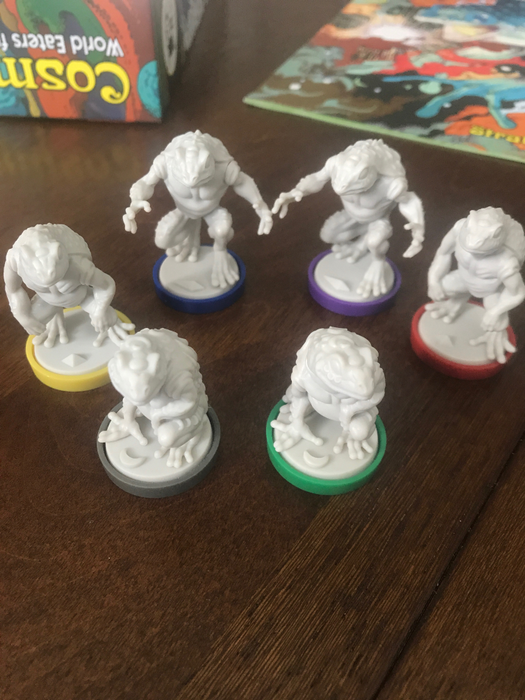 This is what they look like out of the box, and how they looked just 12 days ago. I know I've mentioned to quite a few of you that I was getting this game, so I'll try to tag who I can remember talking to about it. @philryuh @nealkfrank @Courageous Bob @nwrex @boardgamegumbo @Hungry Gamer

I did actually plan to buy a bunch of painting supplies and practice on random minis before attempting to paint them myself, but one of my coworkers mentioned how he was getting back into painting minis for Warhammer. After seeing some of his work, and mostly out of laziness lol, I asked if he would paint the frogs for me. Here are the results: 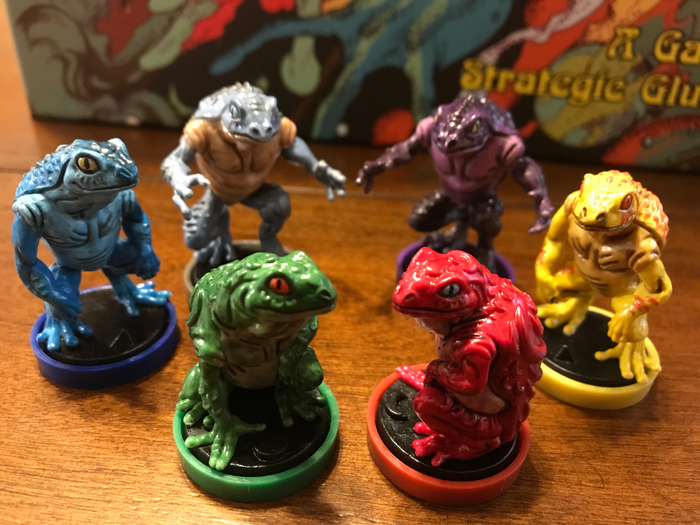 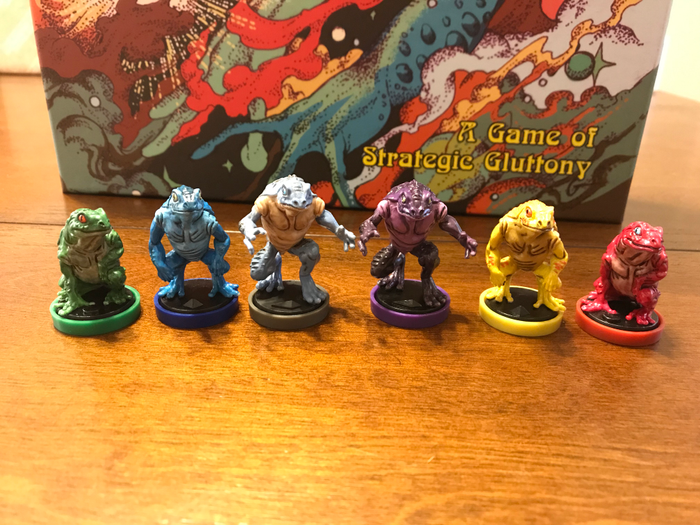 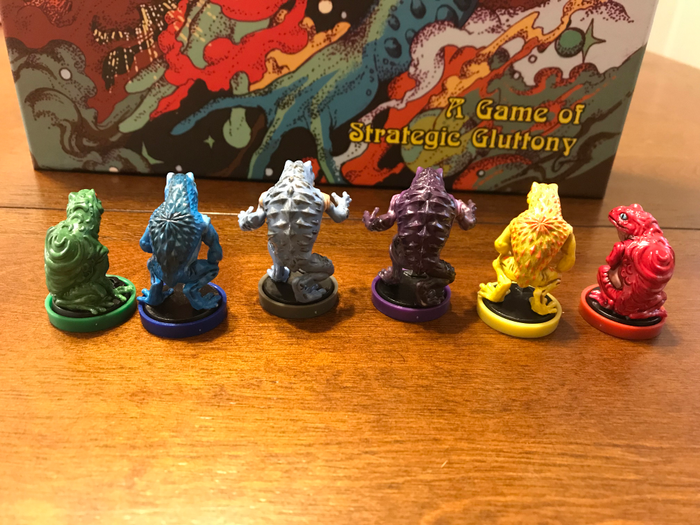 They even look great sitting in the box! Almost like they came with the game that way.. 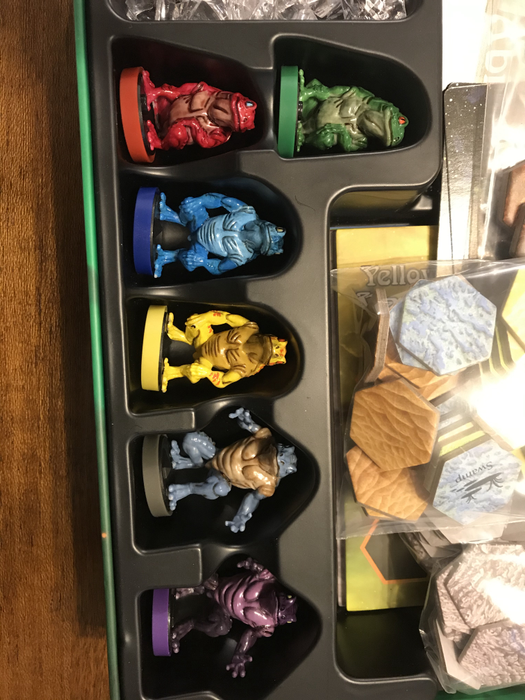 I was particularly impressed with how much the green one actually looked like a frog (not like that's the point of a frog in space..), and of course with purple being my favorite color, I made sure he knew that it had to look good haha. 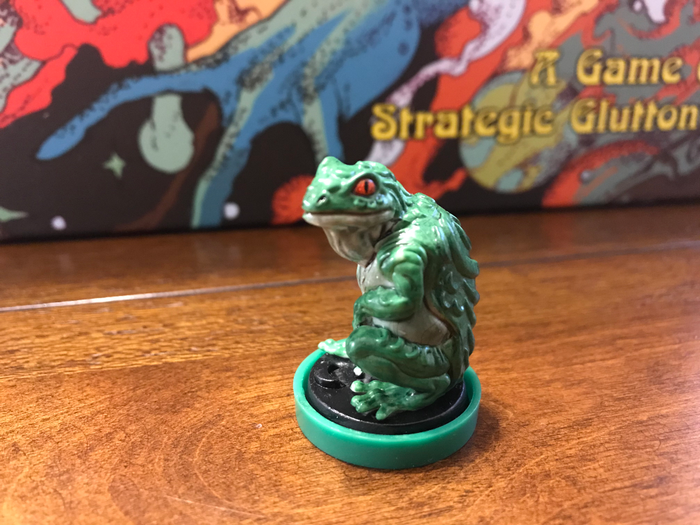 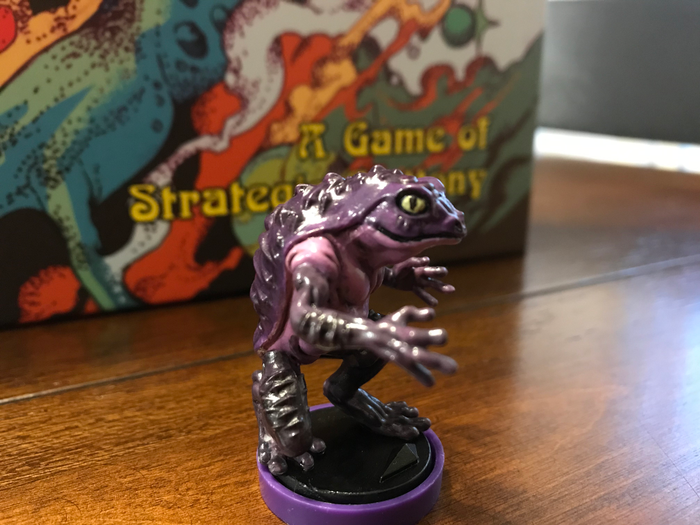 I'm really happy about how these came out! I showed a few pictures to @KingChaos along the process and now he's thinking about shipping all his minis out to my coworker to paint them too haha. If only @KingChaos prioritized playing his turn on Board Game Arena over his minis...(am I right, @theDL?) :P

Of course, now that I have #Trick Shot, that will be the next project for him to paint. :D

Those are so cool!

Reminds me of a commercial from when I was growing up (25 seconds in).

Thanks for the laugh!!

Love it, it has so much more personality after getting painted :D

What's the theme about anyway? I've heard a little bit about the game and it seemed like something I'd enjoy, but one that I would never be able to get to the table lol

Ummm.. lemme see you're a 2 mile tall space frog that eats land masses of planets haha. All while trying to attack other frogs from doing the same thing by kicking them into the outer dimensions.

Minis look awesome! I am super curious about this game.

Wow, fantastic job by your colleague! I feel you on the laziness, I bought paints for #Cry Havoc and got as far as spray painting one faction..... Maybe one day 😅

Hahaha that's hilarious. Thank goodness he agreed to it though because I would definitely be in the same place you are

DUDE! These are dope. I am honestly considering snagging this game when I can find it. It seems like a game that is high interaction with a fairly low rules overhead?

Oh high interaction for sure. Rules wise..um lol. I think the gameplay is easy enough once you know what you're doing, but I remember the rulebook being a bit much to get through.

Lol the only gameplay I have seen is with Ricky Royal and he always makes things seem really obvious but I fully admit that I dont know the game well!

Yeah same..I only have played it that one time but it was a ton of fun. Definitely a lot of arbitrary randomness that could lead to hurt feelings unless you have the thick skin of a frog haha

YAaaa it is all about mental prep for this type of game. You gotta come in ready to get hurt lol

Wow that's really cool. And very nice of your friend to paint them for you.

Yes indeed! Hoping he'll be willing to paint some more stuff once I figure out what colors I want my Trick Shot minis to be :)

The green one is definately Gollum from The Bakshi Animated Hobbit TV show. :) Very cool.

Haha I can see it!

Nicely done!  It's always nice to add a bit of bling to a game by painting mini's.  You get the fun of painting and it adds to future gaming experiences!

It's also nice that you didn't have to paint 20 minion level characters.  I just find that tedious and boring!

Yeah he did an awesome job! And to your point, I don't think I have the dexterity or patience to do it myself lol

I love painting them but I cannot stand painting the same mini many many times.  I painted #Sword & Sorcery: Immortal Souls and did details on all the models and it nearly drove me insane.

When I painted #DOOM: The Board Game I did the imps and soldiers in basically a base colour and then picked two or three details to paint and left the rest.  Still looks good on the table and was way less madness inducing.

These look fantastic! Have you played the game yet?

And yeah...playing one turn a week is...let's say "not ideal"

Only once online, haven't gotten around to playing in person yet. Hoping to be able to possibly this weekend.

Hahaha I know! I feel like the game should have been very much over by now.