What's on your Shelf of Shame? 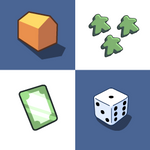 updated 4 days ago | posted 7 days ago

i polled the attendees of Breakout con in Toronto about what's currently sitting on their Shelves of Shame. What's on yours?

I've been doing really well at getting my games off the shelf of shame.  Mind you, I'm counting online and solo plays as played.  If that's the case then I only have one:

I think we had five or six the last time we played. It was still great!

I want to get it at least once before I consider whether I keep it or not.

3 games at the moment

Pretty happy with the status of my Shelf of Opportunity.

I usually do a pretty good job of getting games played shortly after I purchase them. However, #A Game of Thrones: The Board Game Second Edition has been sitting on my shelf of shame for about 4 YEARS now. It was given to me as a Christmas gift by a Game of Thrones fan but I have not watched the show or read the books.

I've kept it around because it does seem like a solid but hefty game which I would like to get to someday. But every time I open the box and take a look at that enormous rulebook, I quickly get discouraged to even read it.

I might get to it someday, but I'm in no real hurry and have plenty of other games to keep me busy in the meantime.

The GoT game is pretty good and the rule book isn't as terrible as it looks.  I havne't played my copy in about 2 or 3 years but I keep thinking about getting it off the table for one of my upcoming gaming Saturdays.

Haha, I love it! Dune Imperium guy needs to get that played!

I'm still a bit daunted since none of them are exactly light, haha. Road to Canterbury doesn't seem too complex but all of these will take some effort to get to the table. Especially LOTR, I suspect.

It beats what i've got going on, which is (among many other things) Alchemists: The King's Golem. Not only do i have to teach and play Alchemists with a group willing to sign up for round 2, but of all the games in my collection, King's Golem has the highest "weight" rating on BGG!

Woof, I do not envy that!