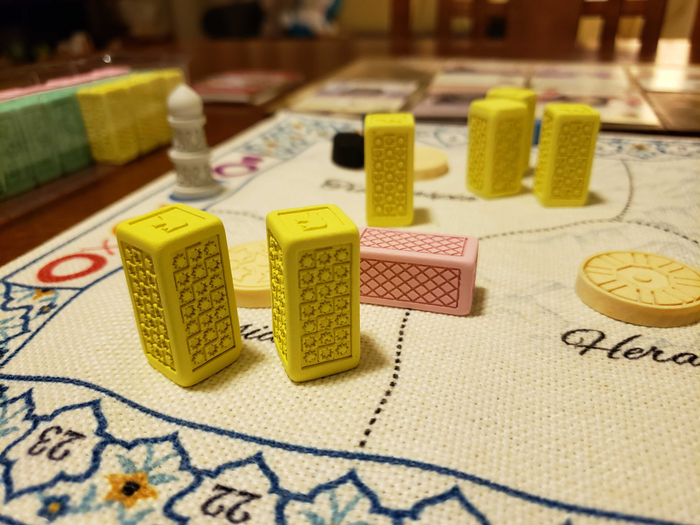 It took several sessions of learning the game through videos and reading the rulebook, but I finally got in a solo session on Saturday night. Here are my first impressions!

I love the box.

Love the purple, love how dense the box is. It's a small box with so much game inside and the organization isn't compromised much at all.

Great rulebook, until I got to the solo mode rules.

Surprisingly a good and easy read with plenty of visual guidelines. It had me nodding again and again just thinking about what the game is attempting to accomplish and how the design is trying to support it. Strangely, once you get to the solo mode rules, there aren't anymore visual guidelines. There are also several glaring grammatical errors and it's not as clear as it could be sometimes. Perhaps nitpicky, but it made me wonder if the draft of the solo mode rules might not have gotten enough eyes after it was added onto the main rulebook (the solo mode had a separate designer).

Most of the setup time goes into constructing the draw deck for the market. Otherwise, it's surprising how little there is to do to start the game considering its depth.

I noticed the two games have about the same weight rating on BGG. Personally, I think #Pax Pamir (Second Edition) sits a few notches above #Root for reasons below:

This is a game that makes me want to learn the history of its settings.

Whenever I play a game like #Pax Pamir (Second Edition), it amazes me that there are people out there who can think like this. While abstracted, the mechanics of the game are great at capturing the shifting alliances and political instability of the setting. I'd have to say that it takes some effort to fully picture the theme come through as you make many of your puzzly decisions (and it sure would help to be a history buff), but the decision making this game allows is very fun once it clicks.

Speaking of which, I really like Cole's designs. It's ambitious, elegant, yet complicated to a point that it can be too inaccessible for casual/new gamers. But it's so rewarding for groups that see its worth and hang onto it because it feels like player interaction is at the forefront of his design, instead of being a byproduct. That comes through even as I played against Wakhan (the AI opponent), and I can see how Pax Pamir 2E could easily become a group favorite.

Wakhan makes for a fierce AI opponent because of her flexibility. And that's not just in her ability to maintain loyalty to multiple coalitions at a time, but also in her decision-making that's always geared toward maximizing her benefits. Her decisions typically reflect what a human player would do, and that means you can't make plays hoping for a lucky break in card draws.

Production is off the charts.

Great production goes a long way when it comes to solo gaming. After all, why wouldn't I just play a video/PC game if a board game didn't reward anything other than just a really great puzzle? The tactile fun in this game is the best experience I've had to date.

Verdict: I think this has high potential to be my favorite solo game, but we'll see!

Thanks for the review and I agree: I do enjoy the solo mode alot! Some games are extremely memorable and the itch to play more is far from gone.

My experience, however, really varies game-to-game. Whereas some games are extremely tense in which I enjoy every little decision, others - however - are very one-sided (mostly me winning singlehandedly against the Wakhan).

For example, last night I played a game where I could easily deplete the Wakhan of rupees and could abuse my Intelligence Bonus actions to create a very early advantage. I also had a card that I could buy Russian patriots for free so I did not give my money back to the market. The game felt like simply going through the motions.

Do you (and others) have similar experiences?

Love it! I appreciate your back and forth on the pros and cons. It seems like you are starting to understand the game a little better? Did you win this time around?

It helped so much to go through the rulebook on my own and understand the thematic connections and the purpose of everything! I did win, but I couldn't help but wonder if I made any rules goofs haha, I think they were minor though and it was a worthy win. It's tough!

It is really a deeply thematic game once you dive into it. I find it fascinating!

Hey you cannot expect yourself to be perfect the first time through!

Yeah, I tried to just focus on enjoying the experience. And it was great! I just kept thinking that I should read more about its history before my next session.

I have looked into getting some of the books Cole has suggested to do just that!

Wow, those components are truly gorgeous

Oh yeah, I felt spoiled by them. The blocks are soooo good

The components are what drew me in and the gameplay is what kept me! I've got a KS pledge coming in October :)

That picture you shared.  Another great game to photograph.  I think I would really really like this game.

I know right? So photogenic! And I think you'd like this game too. One thing I forgot to mention is that there's another big similarity to Root. I'd imagine the multiplayer game to have similar kind of tension, where it's up to the players to maintain the balance. When a Dominance Check comes up, the person with loyalty to the coalition that has 4 more blocks out on the board more than each of the other coalitions will win the points. So an inexperienced player could easily give away the win to another person if they can't read the game state.

In the end, the two games play and feel very differently, but the designer's philosophy strongly comes through regardless.

Sounds good.  Well hopefully at some point a situation arises where I can check it out.
1
[-]

If I ever find it in retail, I'll be doing a giveaway for sure :)

Wow! Stunning verdict that it could become your favorite solo game. Remind me what your current favorite is?

It competes with #Architects of the West Kingdom and #Clans of Caledonia but #Root edges them out for me!

Edit: Oops, almost forgot about another great one. Once I get into more scenarios of #Gloomhaven: Jaws of the Lion, I'd guess that it will be somewhere in my top 4.

I'm getting ready to post my first play impressions and battle report!

A place to discuss board gaming from a solo perspective.