We're giving away more than $5000 worth of board games throughout November and December. Here's Round 1! 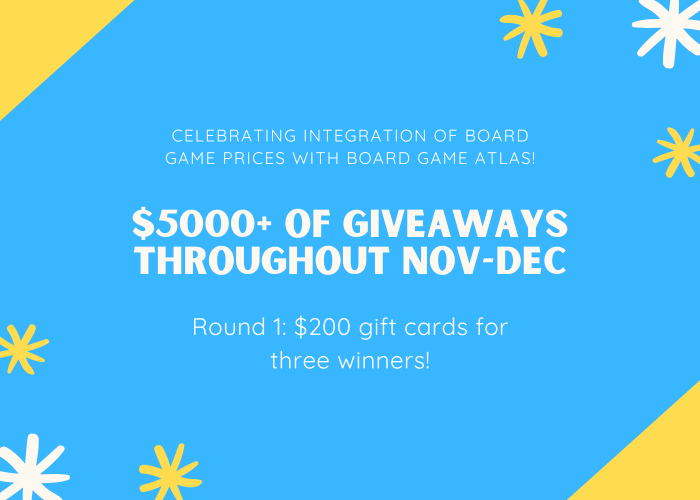 Throughout this month, @trentellingsen and I will be putting all of our efforts toward combining Board Game Prices with Board Game Atlas! For those who aren't aware, we launched BGA in 2019 and acquired BGP in late 2019. We've mostly left BGP alone as is, except for putting in some fixes every now and then to address some bugs. Now we're finally making the moves to combine the two and provide a better community and more reliable data for both websites.

To promote this "launching event," we'll be giving away more than $5000 worth of board games for the next two months and here's Round 1.

You will get +1 entry every time you complete any of these actions to contribute to our community:
Each contribution is 1 additional entry and there's no limit to your contributions.
With that said, I have several questions!

Will be ordering #Glory To Rome and #Battlestar Galactica: The Board Game at some point since they're clearly the most wanted. Will be tallying up the others.

With a lot of money 💸 xD

You got Inis???? Woo! That was my suggestion! haha

Yup! Got enough copies for each of us and 2 copies to give away :)

It's supposedly coming back in stock toward the end of the year or early next year?

Wow that's amazing! Yeah I keep seeing comments that people are able to get it again in Europe, but it hasn't made its way over here yet or something like that. ¯\_(ツ)_/¯

I can't belive youre ordering #Glory To Rome! so crazy!

Yes! Inis! I began looking for it about two weeks ago only to find that I couldn't find it.

There's 1 copy available on Zatu (UK online store I believe?) but at a steep price (both in base price and the shipping) :(

Yeah, that seems to be the case with the few I've found, they were priced out of what I was willing to pay.  I did read on BGG that there should be another run coming to North America before the end of the year.  Fingers crossed!

Another user on here told me about #Magic Realm and I gotta admit it sounds really cool! I'd probably be super overwhelmed just learning it but darn it if I don't really want to pay a crazy amount for a copy just to try LOL

I am lucky enough to have inherited the copy from my father's collection who got me into tabletop gaming, comics, and all sorts of geeky hobbies - undaunted by my lack of a Y chromosome. :)

It is old school Avalon Hill and borrowing from ASL - the rule book is a segmented tutorial. I belive the first section literally is Movement - you play a game that teaches you how to move lol and then each segement adds new rules - I don't even think monsters and combat come into play until segment 3 or 4 and spells and variable player characters towards the end.

So it is a rather dry slog of tutorial games until you 'unlock' all the rules - a tribute to the first era of gaming. It is still a rather dry and complex game of chit sliding - but to me it is important part of Tabletop History.

The second generation of games like Talisman, Mage Knight, etc all stand on the foundations of Magic Realm IMHO.

I think I heard rumor of a fanbased PNP tribute version that might be worth a track down if curious :)

You don't need a Y chromosome to be into geeky hobbies!

But that sounds great that it walks you through how to play. I'm sure it's dry but necessary for a noob like me. Just discovered #Mage Knight thanks to some users on here so maybe I'll go for that instead.

Very curious though as it sounds amazing! Thanks for the info!

Okay so THAT does sound extra geeky haha. Were your friends open to playing them with you and did they have fun? I only played Cosmic Encounter once and it was kind of a drag. I had an OP faction that we quickly discovered would be pretty impossible for anyone else to overcome so we kind of just gave up.

I put Mage Knight on my wishlist for my Secret Santa Exchanges at least. Might make my brain explode but it does sound intriguing.

Well it looks like you can buy Mage Knight yourself lol

Thanks!! Will I though? Probably not right now that's like half the win haha

Also buy some Dark Tower and the fancy Acquire.

Good call - definitely a few Dark Towers and snazzy Acquires - toss in a Space Hulk and a quick jump forward for a Starcraft if I have any early 90's pricing money left.

Why would you go back in time for HeroQuest? Was it much cheaper or more available back then?