Where do you fall? 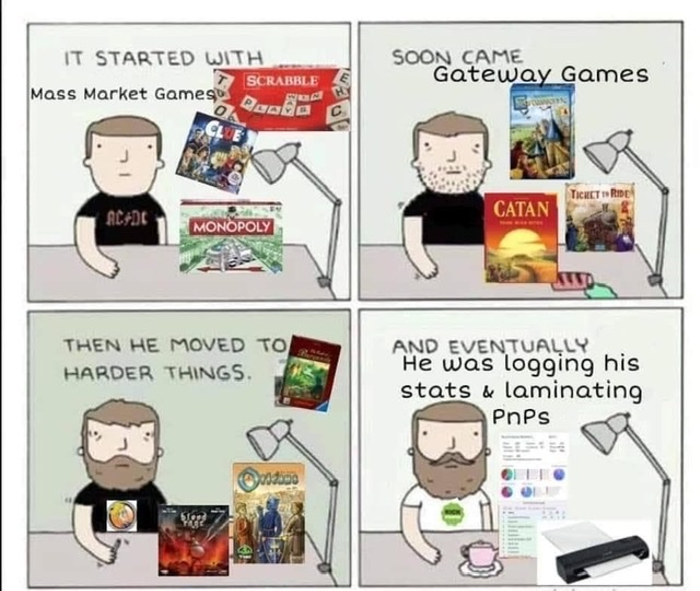 Actually thinking about it I skipped step 2 altogether.

Oh definitely 4. I've been logging plays for a while, and though I haven't actually done a PnP, I've considered it. I have, however, printed things out to supplement my games I have, such as player guides.

Definitely between 3 and 4 here too.

Frame 1 - On and off for years just on Monopoly (elementary to middle school years). Then zero board games until basically after college

Frame 2 - Tried Ticket to Ride after getting married. Decently fun but my wife and I weren't too excited by it. Flash forward around 4 years, I got introduced to Love Letter, Azul, Railroad Ink, and Santorini. I was really impressed!

Frame 3 - A few weeks after getting introduced to the games mentioned in Frame 2, I got dunked into more complex games like Viticulture and Root. I've played a variety of light-medium to medium weight games since and even got my wife into it :)

Frame 4 - I log plays. Kickstarter has felt more tempting than ever, but I don't think I'll ever get into it. I think laminating PnP's is certainly in the foreseeable future for Root lol (I'd much rather get the Clockwork Expansion if I had the money though)

I love the detail!  I may have to think about my timeline more appropriately.

Hahaha glad you liked it. My timeline definitely ramped up like an exponential graph, so.... things aren't looking good for my wallet and what's in store in Frame 4 xD

I would put myself between three and four.  I am definitely looking for ways to bling games and looking into and playing harder games.

At this point...I am between the third and fourth panel...

I'm transitioning from three to four.

Just waiting on the the log a play feature here to be improved lol.

I'm logging everything, but I'm not super detailed about it.

I've begun logging all my plays (I started at the end of 2019) but figure it'll help me keep track of meeting my gaming goals for the year.  I don't use a lot of information, just the date, if I won or lost, and how many players were part of the game.

I'm still on the fence for logging digital plays.  I think I may for TTS (especially if it's with people from the BGA community) and probably won't for straight digital versions of games.

I am details guy so if I do start logging I would for sure have to include everything I could...

I understand that.  I think I'll get to that point eventually.  Right now I just really want to see where I'm at through 2020.

Totally! I need to be a generalist, not a completionist for sure lol.
1
[-]

It is nice to mark it well though.  I have a small part of me that want's to delete all my 2019 recordings to have a good record for 2020.

Maybe that's an idea for an update @philryuh @trentellingsen a way to sort plays based on year.  A circle graph would be cool too.  And maybe a way to change colors on the graphs.

I will ALWAYS be on board with ways to sort and display data!