Is Villainous a Good Game? - My First Impressions 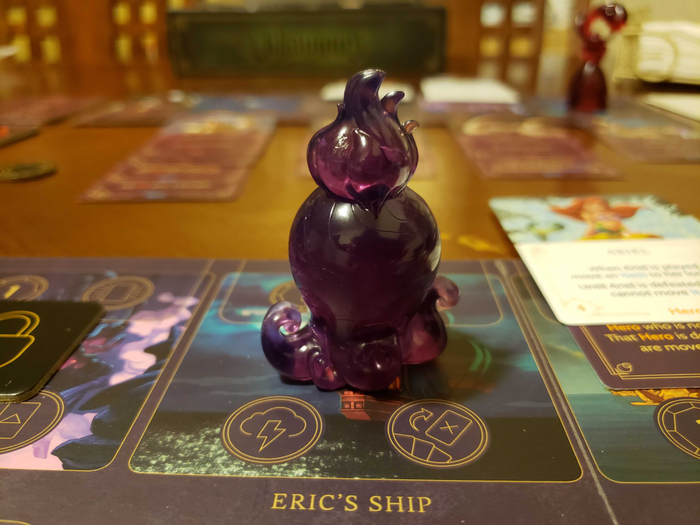 I mentioned in another thread that I got a second-hand copy of this game a while back. I finally tried this out playing both sides for a 2p game. Sure wouldn't have happened if we didn't have this Weekly Challenge going on! (This has been a big motivation to get games off the shelf, so I hope it's been helping all of you too).

Here are my first impressions:

This was the first time I learned a game watching Rodney Smith's video. I typically don't do that because I have trouble keeping up with all of the info and prefer reading through the rules myself. Either way, I was ready to go after about 15-20 min. 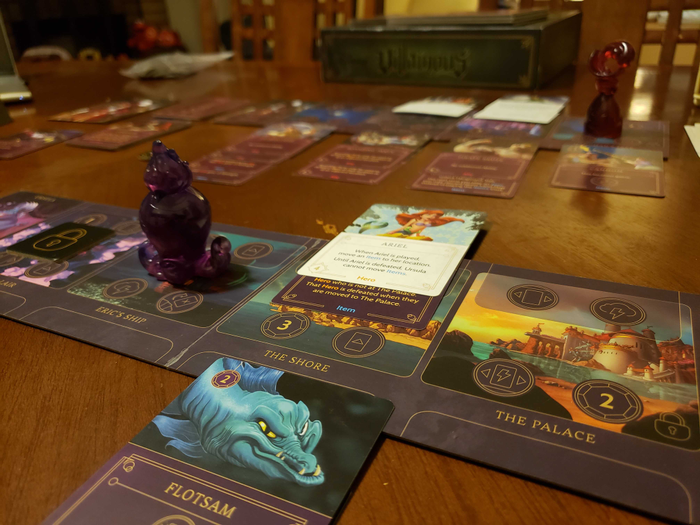 If you try out this game and feel it's just "okay"... you can let out a sigh of relief and move on. But if you or your gaming partner/group actually like (or even love) this game? You're going to have trouble resisting the urge to buy all of the expansions. It's a full-on Disney fan service with so much attention to detail:

You're mostly deciding where to place your villain. The villain board features several locations that have actions you can trigger when you move your villain to that location. For example, if I were to move Ursula to The Palace, (from top to bottom, left to right) I would be able to move one of my allies (e.g. Flotsam) to an adjacent location, draw from the opponent's Fate deck (will get back to this), move one of the Heroes (e.g. Ariel in the image) to an adjacent location, and gain 2 Power tokens--all of these actions in any order.

Playing a card from the opponent's Fate deck is the main point of interaction in Villainous, and is also a big "take-that" move. It typically features a Hero or an Item that you can place on the top side of your opponent's locations. By placing a Hero in a location, you essentially block your opponent's access to the two actions that are on the top side of a location. These actions remain blocked until the Villain manages to vanquish that Hero.

I often find that I appreciate game mechanics like this, where it's one simple move that has numerous consequences (good or bad) to consider.

Random, and likely not too balanced.

For example, Ursula's objective (victory condition) is to be at her Lair with both the Crown and the Trident. Before you get to that point, you must first find the Trident from the deck, which will then summon King Triton, and you will retrieve the Trident after vanquishing the King. But here's the thing--the Trident happened to be placed 3rd from the bottom of my deck. Yes, there are ways to help you go through the deck faster, but it still doesn't change the fact that this randomness can set you back by a few turns. Oh and just before I got the Trident, Ursula got Fated and drew Flounder from the deck, which forces you to shuffle up your deck with the discard pile :(

This makes me think that a first time player will likely have a hard time winning since they're not aware of what to look out for. But then again, the flipside could be true, where veteran players will likely face situations where the odds are completely stacked against them.

Remember how I complimented this game's simplicity? This game may overstay its welcome if played at higher player counts (4 or more.) 3p games may be the most ideal to keep things tighter but make the playtime longer than I'd prefer for something like this. 2p seems fun as long as the person you're playing with doesn't mind the take-that elements.

Despite the randomness, I still think this is a great game. I'm looking forward to introducing this to my wife some day. We typically don't mind take-that elements too much but I have a feeling she'll get more frustrated about the horrible card draws xD

I bought #Disney Villainous for my wife as a Christmas present two years ago.  We played it once, and had a hard time following it-it's the first game we have where each player has different objectives to win.  We didn't pick it up again until a few months ago when her sister visited.  The three of us played and it went much better.  I think we might enjoy it a little more next time we play it now that we've figured it out.  I do agree that if the card you need to meet your objective is at the bottom of your deck, you might never win. The villians are cool, though!

I'm on the fence with this one. The production quality and theme seem superb, but on actual gameplay it seems to have big short comings.

Yeah, the production side was handled SO well on this one. My wife and I can typically have a lot of fun without taking a game's flaws too seriously, but I do wonder how much replay value this would have (if you stick with the base game only.) It's a pretty neat experience but one that wouldn't be on my shortlist of games to play every time.

The abstract player markers are very cool looking, I can't say this game has ever massively appealed to me and I am not sure why. I do like the theme of getting to be the villain though, although how villainous do you get to feel while playing?

They're quite satisfying to play with!

Hmmm there isn't a whole lot of depth to the villainy in this game. Which makes sense, since it's supposed to appeal to families as well. And by that, I mean that the game doesn't make you feel evil. You're pushing toward your objective in line with that realm's storyline and that's about it. This mostly involves defeating Heroes by having enough Allies played on your side or getting your hands on an Item card in a specific location. There are slightly nuances in terms of how to pull off all of this, but nothing too crazy. It's not entirely mechanical and it has moments of theme, but it doesn't drip with it let's say.

Your question also reminds me again that it would be cool to have a game that actually tests the morality of the player. #Architects of the West Kingdom has a cool virtue track that I like but something much deeper than that.

Good to know, I am sure I will try it out some time but not one I will look to buy.

I think it would be incredibly cool to have a game that did morality in a deeper way. I think it is kind of hard as games naturally remove any real consequences (other than losing) for you actions. Games also tend to be pretty individualistic/win-at-all costs so there isn't much space for moralising. Alternatively, say in the case of #Architects of the West Kingdom it is a baked in mechanics which in reality just reduces it to a mechanic. You just weigh up the cost/benefit and decide to be 'moral' or 'immoral' depending on which will serve you best: games make cynics of us all!

Not sure how you would overcome that in a game or even if it would end up being a good game?

Nice! Yeah the randomness is a pretty big factor, but this game isn't one to be taken too seriously anyway, haha. Are you at all interested in getting the Marvel version that's coming out?

But really, I'd have to try this out with my wife first and see how she likes it. I doubt I'll get it though. I'm the one who always initiates our game nights and since those don't happen all that frequently, I don't think it'll get much of a priority in my list of games to play--every time.

Sure is a looker though and I feel like it really brings out that collector's mentality in people.

Haha, yeah. Our friends who have it (and who are super into Disney) have bought every pack so they can have all the villains, and have pre-ordered the Marvel version, and I wouldn't be surprised to see them buy every Marvel pack as it comes out too. It definitely has that "collector" factor.

Interesting! It seems like most "mass market" games typically feature major amounts of randomness and luck. I wonder why? Anywho, great job playing both hands. I think that would be very hard to do.

My guess is that it's because randomness lowers the effect of skill and experience, so new players have a decent chance of winning. For a mass market game, that does seem more desirable than heavy strategy, at least with a theme like this.

I agree, it also means players don't get any AP, which I could imagine being very off putting for new player (as it is for experienced players)

I would imagine it also has some to do with ease of designing.

Update: Tried out a 2p game with my wife last night! And..... luck played a big factor in the game once again.