What Kind of Gamer are You? 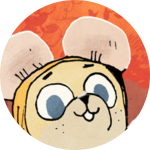 I was recently asked for game recommendations by a relative who was new to the hobby. This was a true blue, often-cited, yet in my experience actually rather rare, “My husband and I love Catan, what other games can you recommend?” type of situation. For reasons unknown, my mind conjured up an old Magic: the Gathering blog post by Mark Rosewater (Magic’s lead designer) - Timmy, Johnny, and Spike

For those unfamiliar with the Timmy/Johnny/Spike paradigm, it's a collection of psychographic profiles that Magic R&D uses to categorize their player base. You can read the above article and it’s follow-up to get a deeper understanding of the profiles, but they can be summed up as follows:

Timmy/Tammy play Magic for the experience. They want to feel something while playing, and are usually drawn to the big flashy spells, regardless of the resource costs associated with playing them or their competitive viability.

Johnny/Jenny players invest in Magic as a form of self expression. These are your deck builders, your tinkers, your combo creators, the people that find joy in exploring Magic’s design space. They want to be competitive but only on their own terms.

Spikes are here to win. For the Spike, Magic is a crucible which they can use to demonstrate their mental capabilities. These are your competitive tournament players.

Whether you agree psychographic segmentation is an effective marketing tool or not, it’s pretty clear that Magic’s R&D department tries to cater to these three profiles with each set release. That undercosted power card that will be in the next high profile tournament winner’s deck as a four-of? That’s for the Spikes. The legendary creature with double-digit power and toughness and a unique ability? Timmy and Tammy will line up to buy booster packs in hopes of obtaining it. Surely Johnny and Jenny will have fun exploring the combinations offered by these sets of cards that might work incredibly together, if they can only find the supporting elements.

Board games kind of do this too, right? It probably doesn’t reach the level of a psychographic profile, but this is the kind of thing people are talking about when they identify as “Eurogamers” or say they prefer “Ameritrash” games or what-have-you. Of course, the lines are starting to blur on the Eurogame/Ameritrash classification, with relatively recent high-profile releases taking a more hybridized approach. Such as Terraforming Mars proving that Eurogames can have strong thematic elements or Gloomhaven showing the world that a dungeon-crawler can adopt Euro mechanisms.

Because of this recent trend towards hybridization, I’m not sure the idea of a two point spectrum is particularly useful anymore. Instead, I keep coming back to the idea of a three-circle Venn diagram:

Mechanical Interaction - the importance of a game’s inner workings. Whether a game has to have clever mechanisms for you to interact with in order for it to find space on your shelf.

Importance of Theme - somewhat speaks for itself, how important it is that a game have a fully realized theme and how much you care about the way that theme is integrated into the game. The “narrative strength” of the game.

Competitive Viability - Does the game make you feel like you’re actively competing against the other players? This could represent the level of player interaction a game offers or possibly how “in control” the players feel with regard to winning. How important player agency is to you.

Where you land on this diagram might help determine the types of games you enjoy. For me, theme is first and foremost on my mind when examining a new game. My favorite games are those that tell stories, whether in the form of a structured narrative or those that emerge from the act of play. If I can engage with a game’s theme, I’m already more than halfway to liking it. I also enjoy when a game gives people the opportunity to feel clever. I get genuinely excited when someone makes a novel play or when I get to experience a game mechanic I haven’t encountered before.

Least important of these three criteria to me is competitive viability. Don’t get me wrong, I’m always playing to win and would never sabotage a game state intentionally, but I’m not always pursuing the most optimal route to victory. In my old MTG tournament days, we called this “fancy play syndrome” (though I believe the term actually has origins in professional Poker). I just sometimes have more fun exploring a novel path to victory even at the expense of percentage points towards actually winning the game.

Using this model may shed some light into why I prefer something like Terraforming Mars to a game like Brass Lancashire. The theme of being an entrepreneur during the industrial revolution reminds me of filling out budgetary estimate spreadsheets at work. There’s a very clever game there, and I admire Brass for some of its mechanisms, but I can’t engage with it on a thematic level. But if I can be a megalithic entertainment corporation that crashes a giant ice asteroid onto the surface of Mars for a ratings boost during Sweeps Week? I’m in! Very disparate reactions, despite both Brass Lancashire and Terraforming Mars ostensibly being economic management games.

When I made my recommendations to my relative, I hadn’t thought through any of this. Working strictly off instinct, I told them to take a look at 7 Wonders and Champions of Midgard, two games I’ve enjoyed that I thought they might too. But now I wonder what their response would have been had I instead asked, “Well, what kind of gamer are you?”

So what do you think? Did I nail it with my Venn diagram model or am I way off base? What’s important to you in a game and what characteristics do your favorites share? What recommendations would you have made to my relative? Is exploring topics like this something you’d like to see more of?  Leave a comment and let us know!

Fascinating thoughts, Quantic Foundry has a "boardgame motivation tool" that I have used and found fascinating. But, it isn't really something you can use for new gamers. I feel like your venn diagram offers enough definition to be helpful without being too burdensome.

I will just comment though, new gamers often don't really know what they want in games until they try it. A brand new game might not want story in a game because they don't know that games can tell good stories, etc etc.....

Thanks for the comment, Marshwiggle92.  I think your comment regarding new gamers is well founded and something I didn't really have a clean answer to.  People would have a tough time placing themselves on the diagram without several context points to make use of.  You might be able to guide them through a discussion, but the margin for error would surely be higher, especially accounting for one's own biases.  Really drives home some of the virtues of gateway games, I think!

I hadn't heard of the "boardgame motivation tool" before, I'll have to check it out!

It's interesting how different the graphs are: 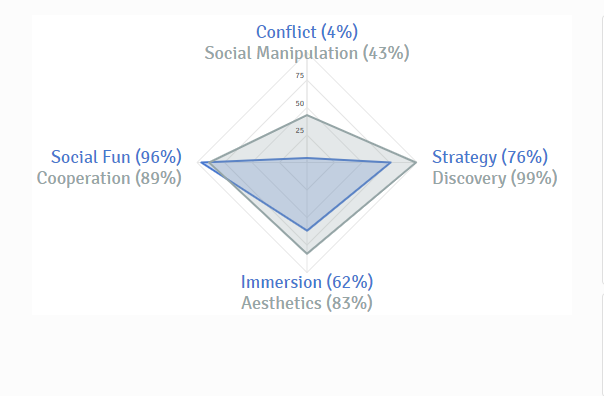 Here's mine.  I'll try to get Mrs. Saint to do it too and post her profile later tonight. 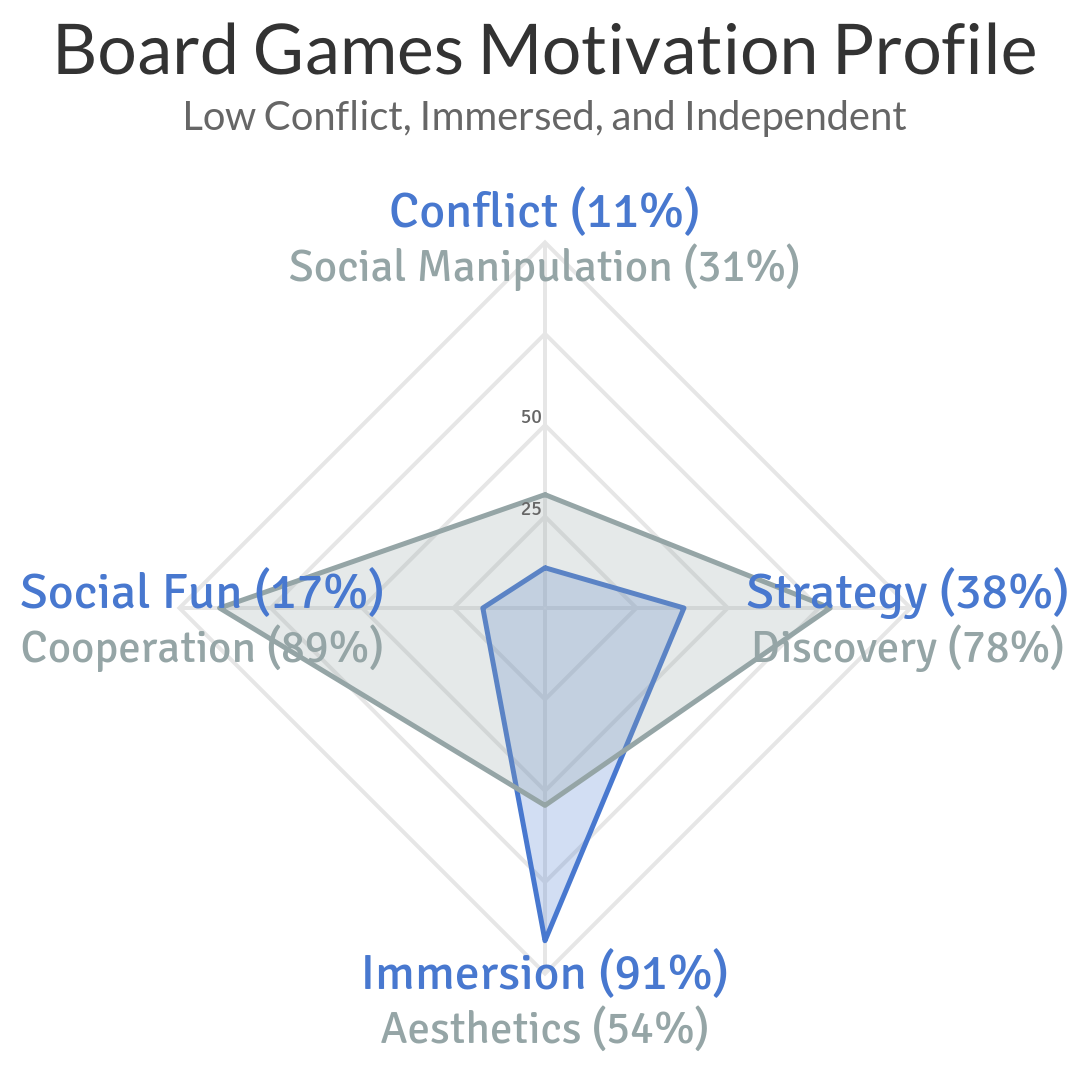 Looking forward to it.

Mrs. Saint here. This tool is pretty amazing. Thanks for bringing it to our attention Marshwiggle! Here's how my final profile netted out. Not sure I 100% agree with it. Maybe I didn't answer some of the questions quite right because I do love the strategy aspect of games and thought it would be higher. 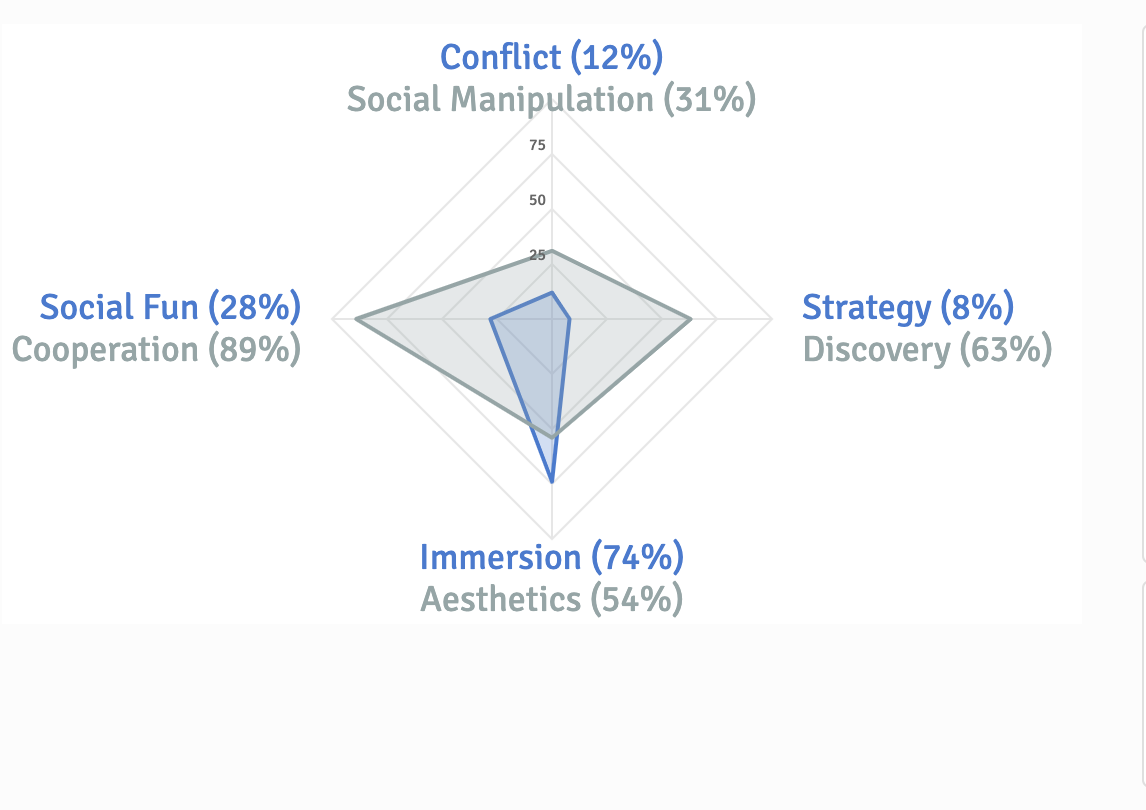 Glad you enjoyed it. I want to try to re-take it every year to see if I change or not.

I just did the same...it's interesting...