Players Wanted! The Transcontinental on TTS 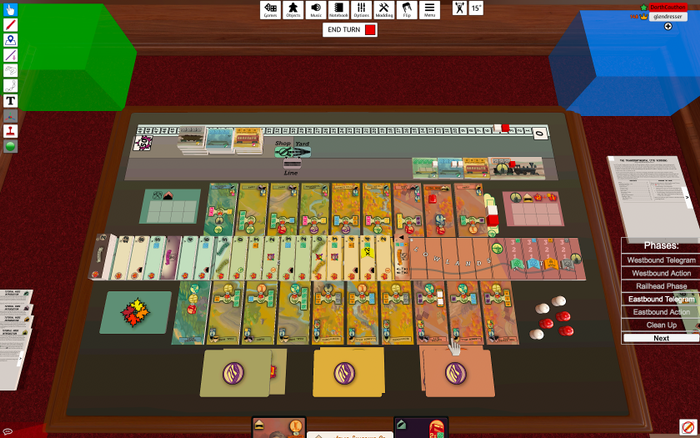 I'm going to be reviewing The Transcontinental in a few months (or so), and I'm looking for players to play with me. I just finished playing it on Tabletop Simulator with the designer and now I'm ready to play, play, play!

A little bit about the game, first of all. It's a worker placement game at its heart, and also includes other mechanics such as resource management and bidding. The "Telegram" phases have you placing your telegrams (these are your workers) along the line. During the Westbound and Eastbound Action phases, the train moves along the line, stopping wherever there's a telegram placed. When it reaches a telegram, the owner of the telegram takes actions. These actions include moving your resources onto the train, moving your resources from the train to tiles in order to improve/build on them, playing Ally cards (for one-time bonuses), and other such things.

The train stops when it reaches the railhead, at which time all players lock in bids (using their resources) to help build the track (thus opening up more worker placement locations). Bidding more resources allows you to claim pieces of the track first, scoring points and getting bonus actions. The Last Spike track tile moves toward the Railhead tile during this phase (slowly but surely). When the Railhead and Last Spike meet, the end game is triggered and one more *half* of a round is played out.

There's more nuance to the game than all that, and it's a really neat game. The theme revolves around building the Transcontinental Railroad in Canada, starting in the Maritime provinces and moving to the prairies and out past the Rockies. The Kickstarter won't be until November (most likely), but he's getting an early start on reviews. Much of the game on TTS has been scripted and automated, which really helps the game flow.

If you'd be interested in playing a game with me, let me know! We can play 2-4 players, and expect it to take a couple of hours on your first play through. Let me know! I can do as many sessions as we need. 😊

It is indeed. 😃 Let me know if you'd like to play some time!