Last night at game night (after playing a wild 4-player game of #Rurik: Dawn of Kiev), we played #Nova Luna, a relatively new gamee (2019) from Stronghold Games. I hadn't really heard much about the game, so I was interested to learn more.

It felt similar to #Patchwork in that the player further back on the track plays their turn. You're trying to get rid of advil-looking tablets/discs; the first player to do so wins. You do so by collecting tiles and connecting them to other tiles, following the requirements on the tiles. Vague? You bet it is. It took me a little bit to actually understand placement rules, but once I did, it was like,  "duh." 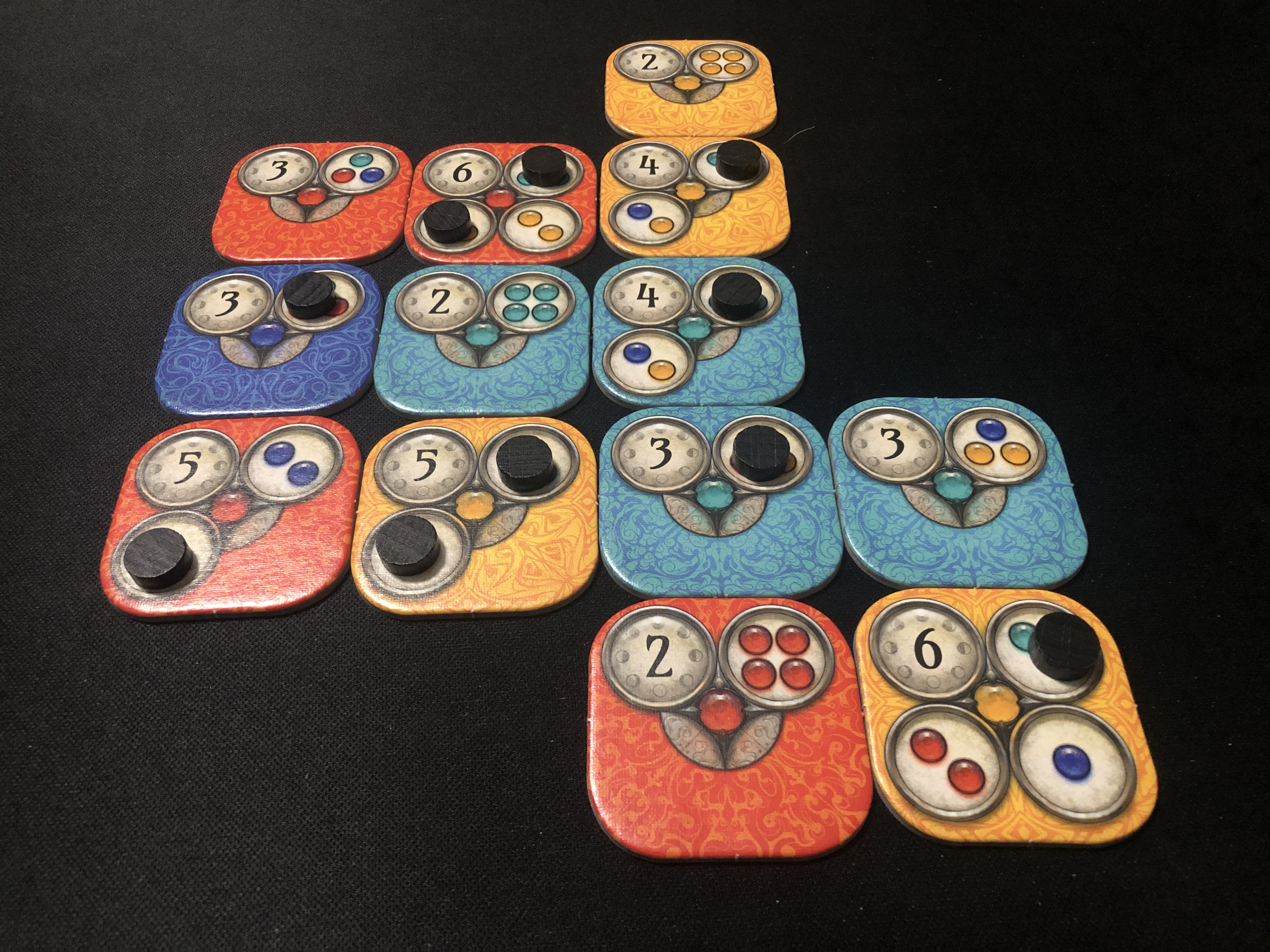 When you take a tile (one of the first three from where the moon marker is on the track), you move your marker as many spaces as the number on the tile shows. Then, you place it in your personal tableau, trying to connect a certain number of colored tiles to it (and others). For example, the Red tile with the number 5 still needs to be connected to two blue tiles. Once that happens, I can place an advil...er, disc on the circle that shows two blue dots.

The first player to place all of their discs is the winner.

First impressions? I really liked it. A lot thinkier than Patchwork (for me, at least), although it has similar mechanics. And it's not too difficult to learn (despite my personal attempts to make it so). My wife really likes Patchwork, and I think she'd like this one even more.

Because it's from Stronghold games, the production quality isn't fabulous, but it's not bad. The game is probably a bit more expensive that it would be from another publisher with the same quality. But, that's neither here nor there. The discs were a bit small for stacking (which happens when markers end up on the same space), but that was honestly the biggest issue we had.

While it's not a game I'm anxious to go out and purchase (regardless of price), I'd be more than happy to play it again. And, it plays well at 2 (or so I'm told), which is a huge plus.

Yeah, it's a steep price for sure. That right there is reason enough for me to not get it.

Oooh I like these sorts of puzzles. Seems ideal for a solo game. Highly unlikely for me to buy it, but it sounds fun :)

Apparently it plays solo as well. But yes, highly unlikely I'd buy it as well haha

So is each player creating their own set of tiles or is it a shared construction like in #Carcassonne?

Each player is building on their own set of tiles, so there's no worry about other people messing with you...unless they take the tiles you need haha

Wow, pretty high praise - Patchwork is a pretty popular game (though it sounds like you're not in love with it)!

I actually really like Patchwork. But I can see how it came across otherwise. haha

It honestly seems pretty interesting and simple! The mechanics are straightforward but the game looks nice and I can see how jockying for player position would make the tile selection competitive!