Back in January (2019), Dan and Connie completed their highly successful Kickstarter campaign for Chai and simultaneously gained 1K+ Facebook members. So what was the key to their success?

Hey Dan and Connie, thank you for making your time! First up, could you tell us a bit about yourselves?

Thanks for having us, Phil! For sure. We're a husband and wife team out of Calgary, AB (near Banff) in Canada. It's a bit weird talking about ourselves in the 3rd person, but we're both gamers. Dan was in humanitarian aid and community development for five years, and Connie is currently in her second year of teaching junior high special needs. We're both avid gamers and on the side we shoot a bit of wedding photography, which has a nice carryover into shooting board game pictures.

It's my first time interviewing a couple! So if you don't mind me asking, how did the two of you meet? Was tea involved? :)

Hah, you're right! Our first date actually involved ordering London Fogs (Earl Grey tea with steamed milk and a touch of honey or condensed milk) at Starbucks. Connie worked at the University of Calgary as a Resident Advisor after graduating at Queen's in Ontario. We met through church and Dan offered Connie a book to read. She invited him to talk about the book and "get to know each other a bit more." Dan wasn't the brightest at the time, but on the drive realized she was asking him on a date instead of a book study. We were engaged nine months later, and after a summer wedding (with an outdoor giant chess board, of course!) we've been married for nearly four years.

All couples have their own unique dynamic, so I'm curious, how do the both of you balance out one another as a team?

Connie is wonderful at giving constructive feedback as she's able to identify gaps. Dan's really good at finding innovative ways to solve problems and create, and Connie helps curve this ideation in a helpful way. Connie is great at figuring out strategic pathways, and if anything is the string while Dan is the idealist balloon! It was fascinating taking the StrengthsFinder test to see where we both excel at, instead of approaching things from a deficit perspective (what we're bad at) and trying to improve those.

Now let's talk about Chai! For those who might not be aware, could you give us a short overview of the game?

Absolutely. Chai is an immersive game of combining tea flavours to make your perfect blend as a tea merchant. It's geared towards families as it plays 1-5, but we've designed it with the gamer in mind. If you mixed Splendor and Century: Spice Road together with some abilities players can use, and a bit of the popular phone game Bejewelled, you'd sip something like Chai. On a player's turn, you're able to visit the market to purchase ingredients such as jasmine, mint, berries, lavender, lemon or ginger. Tiles that match up can be bought for the same price, which is a neat puzzle mechanic. You could instead go to your pantry and select honey, milk, vanilla, chai spices, or sugar, which are requested ingredients for some customers. Lastly, you can reserve a customer for your tea shop while performing a special ability (with new ones cycling each round). At the end of your turn you can optionally complete a communal order or fill the cup of a customer in your tea shop. People love clanking the bits into physical tea cups before flipping over a tip token!

What was the trigger behind the initial ideas about the game—did the theme come first, or the mechanic?

Great question! Dan attended a board game design conference early last year with a submarine game (hopefully we'll release it in the next few years), and we figured it'd be better to work on a more accessible design first. To our surprise there were little tea games out there, so we brainstormed different mechanics that would fit the theme. "Chai" is a word that means tea in many languages, so we're glad that people can easily discern what our wee tea game is all about by just glancing at the box cover. We realize a lot of designers work from mechanics towards theme, and just prefer to start with the theme first.

What do you think are the main strengths of the game and what kind of audience does it tend to draw?

We set out to create a game for five players that plays in under an hour, and are really excited to have reached that goal. Vibrant colours in the box art and game graphics were also a must, which has helped it feel a bit whimsical, especially with characters like Van Gogh and Alice in Wonderland each craving a cuppa. Our theme is definitely a strength, and we've had the most interest in the sliding mechanic we use in the main market board for purchasing tea ingredients. This part is interactive too, as other players usually chime in with different combinations they see to help the current player. Chai is also really inclusive, featuring women and men from different nationalities, and we especially wanted our game to be illustrated by ladies. Sahana Vj is from India, and Mary Haasdyk is here in Calgary, Canada. Diversity is beautiful!

What was the biggest hurdle you faced during the campaign? Is there anything you'd do differently in your next campaigns to prevent this issue?

To be completely honest, we weren't sure how to incorporate stretch goals at the start! We put them up the next day after a strong showing on Day 1, but we needed to quickly brainstorm new ones in the weeks to come as we went through the initial ones very quickly. A good problem to have, and our communi-tea offered great feedback to suggest relevant things they wanted to add. We're glad that we reached all of them, and the playmat has especially been very well received. A local friend is working on a Chai companion app too, which we're really excited about.

One thing that particularly stood out to me was that Chai was created to be color blind friendly and language independent. What led to this decision and how much extra work/time does it take to make this into a reality? Would you say it was worthwhile to achieve this?

Thanks for the compliment! Yes, having Chai be colourblind friendly and language independent were two design goals we had from the start. We're just working out some localization and distribution deals internationally right now, so printing copies with just a changed box and rulebook will speed up the process. We have many friends who are colourblind (and interestingly there's a higher percentage in the gaming community), so we had some excellent feedback initially to make sure that the eleven ingredient colours and five unique tea tokens all featured different iconography. It's hard to see every game become colourblind and language independent, but it's wonderful seeing the industry moving towards this within the broader inclusivity discussion.

There's an aroma about Chai that is warm and inviting, and the same quality seems permeated throughout your fanbase. Could you share some instances of when the level of support from your community surprised you?

We truly couldn't have produced Chai without our incredible communi-tea! They've blown us away in all respects. From strangers editing the rulebook, to sharing tea recipes, to introducing family and friends to help playtest the game, the 1K+ members have made the game a reality. If it takes a village to raise a child, our community certainly helped with our wee game. By the start of the Kickstarter, over a thousand unique people had given Chai a try, which was essential in helping blind playtest. Having the rules and mechanisms played by so many people has helped tweak different things, such as one oolong card not having a needed ingredient to help properly balance the game.

What would be your advice to many Kickstarter hopefuls out there who'd love to have such a wonderful community backing them?

It's been quite the adventure! It normally takes a few years for a game to reach the market, and we tried our best to make it happen in nine months. Each day we're learning something new, so don't be overwhelmed at the number of soft-skills you'll need to continue developing as we continue to as well on the journey. We're a bit more introverted, so we realized we had to be more active on social media. Augment your strengths, and bring in other people to help where you have blindspots. For example, we're definitely going to bring in a customer service person on our next project, as it's been challenging answering all the inquiries while working on other priorities. We're trying to enjoy the journey and be honest and open about feedback and where the game needs to be improved. Although we're perfectionists, we're making sure we set some deadlines to guarantee we complete different tasks. While working on our game(s), we're also looking for ways to give back to the board game community as well. Volunteer, play in local meetups and conventions, and have an open attitude as you figure out what makes other games successful, and the expectations we all bring to the table.

What was your most memorable moment working on Chai?

We'll never forget the adrenaline we experienced pressing the "launch button" on Kickstarter! Dan was at PAX Unplugged and got home the night before on a delayed flight, so we worked through the night to bring everything together. It was incredible seeing the project come alive; the culmination of our work and the community's over the past few months. Seeing people's print and plays pop up across the world has also been extremely humbling and rewarding. Just to see different gamers enjoy Chai has been a dream come true.

What would you like to say to all of your fans out there?

We're honoured you'd take the time to read or listen to us and our story! We're gamers first of all, so we hope to meet in person. Come say hi to us at an upcoming convention like GenCon, SHUX, and Essen, or if you're in Calgary visiting the Canadian Rockies. Maybe we can squeeze in a game or a tea!

Lastly, are there any exciting developments in the works you could share with us? What would be your dream project?

It's perfect timing to announce that we're just launching the print and play for Chai: Tea for 2 this week! Mary Haasdyk (who did Chai's box art) has sent us the box drafts already, so we're eager to hear the community's preferences and how blind playtesting goes. If everything goes smoothly we'll be launching the Kickstarter late this year. We're working on a bubble tea expansion for the base game as well, plus a few other steeping ideas. It'll be an exciting next few years!

Thanks Dan & Connie for making your time to share about Chai and your awesome communi-tea! I know for sure my wife would be thrilled at the idea of a Boba expansion :)

And lovely readers, what do you think was the key to their success? The approachable theme, accessibility of the game, the duo's authenticity, or is it perhaps Dan's inspiring dedication to his puns? Comment below with your thoughts and feel free to give feedback/suggestions for future interviews!

Please support Dan & Connie by following the links below:

Below are my links to past interviews:

Great interview! I do remember this one making a splash online and on kickstarter. They ran a great kickstarter. 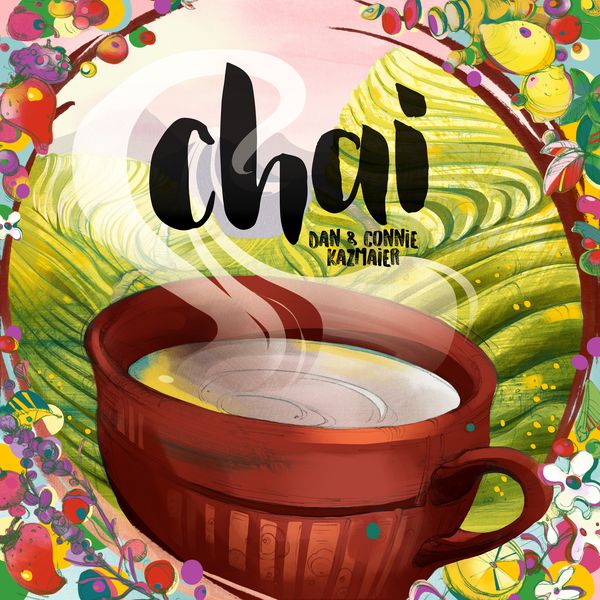