Just got this game on Friday and have played seven times already. I really like it for being a fun area majority game but it also really captures the feel of the consequences of gerrymandering. It is pretty abstract and the political theme isn't necessary but it is also non-partisan in its approach. The fun with the political theme comes from having a game group that comes from various political leanings playing together because it allows for trash talk.

For example, the uh burning cities aren't at all part of the game. One of our players thought it was more thematic though... 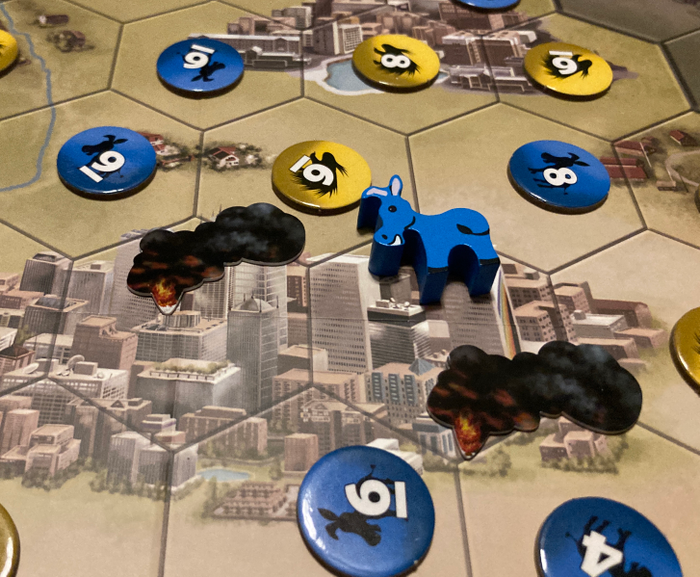 Just got a game of #The Quacks of Quedlinburg with an old friend. It was their first time playing and it was a great time. Definitely have missed in person gaming!

Nice. I'd suggest getting the BGG bits. They are so nice!

I got the bits for #Antiquity 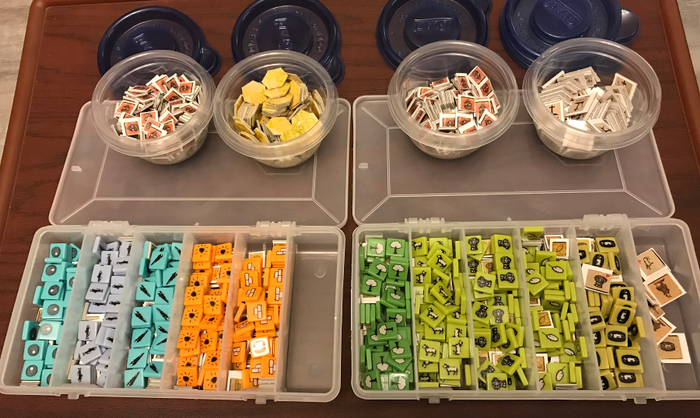 That is a whole lot of cardboard!

It's a lot of pieces!

I like the Plano boxes with the long spaces, like those, because it's easier for my fingers to manipulate what I need.

Yeah, I can imagine them being hard to pick up if you have the ones with tiny square spaces

Man those look nice...if only Antiquity wasn't so fiddly and hard to grok

I have a thing for Splotters. The most important thing is not to run out of wood!

I am with you on Splotters. One of my favorite games is Bus, I might need to give antiquity another look, I am planning to do that with FCM here soon too.

Those look so nice!

I for sure would love t o get those. One day when I am rolling in dough lol

Got to play #Marvel Champions: The Card Game with my son (https://youtu.be/OyC2ZsaiG9Y ) using Dr. Strange and Hulk.  We lost, but it was fun.  PLayed #Wingspan , #Lewis & Clark , and #Castles of Mad King Ludwig.

Lots of good choices there!  How do you like Marvel Champions?

It's challenging but a fun game.  One of these days I'll try to get my family to play together and see how a 4 player game works.  With one of the Broken Token organizers its a lot easier to put together and take apart decks.

Oh I see you posted a video of your Wingspan variant? I'll have to watch that!

Let me know what you think!  I grazed through some forums and found that other folks had made similar game adjustments (house rules).  Some I like and some I thought were a little too much.  I played with another friend using the same rules in the video and we ended 97-106.  There is still a reasonable amount of luck in the game but not so much that you feel you have to depend on it.

The pink powers idea was interesting. Obviously it didn't come up too much in this particular game, but that is something I've noticed when playing with 2 players, to the point that I pretty much avoid pink power birds unless they fulfill some other goal I'm chasing. I'll have to try that one out!

I really like the drafting too. No one I've played with has ever complained about the randomness in the game, but I get the feeling that the guy who has won the last couple of times thinks he's really good at the game when in reality he got off to a very good start haha. Not to say that there is no strategy, of course, but the starting hands do make a difference.

I'm still not sure about the playing cards directly from the tray. To me it kind of feels like solving a problem that I've never really had an issue with in the first place. I'd be interested to try it, though.

I played#Spirit Island solo to try a spirit I hadn't played with before. Got wrecked lol.

Also played#Dominion: Intrigue (Second Edition),#Gizmos, and #The Castles of Burgundy with my fiancé.

Ended the week with#Monikers and #Team Play with my family.

Spirit Island is great solo but playing one spirit is tricky. I tend to play two spirits when I solo as the synergy is a big part of the fun for me.

I'll have to try that next time!

Great! Let us know how it goes!

Cool! I hope my wife will. Not so sure about that, haha.

It was a campaign heavy weekend for the game group. Played two sessions of #The King's Dilemma where things in the story took quite the turn towards "whoops, is that what we just did?" Between 30 and 50% through at this point and just loving the game. Then we started a #Gloomhaven: Jaws of the Lion campaign. Got through the first 4 scenarios, and pulled out a last minute victory on #4.

Got a fair amount of gaming in this week: