There's no coming back 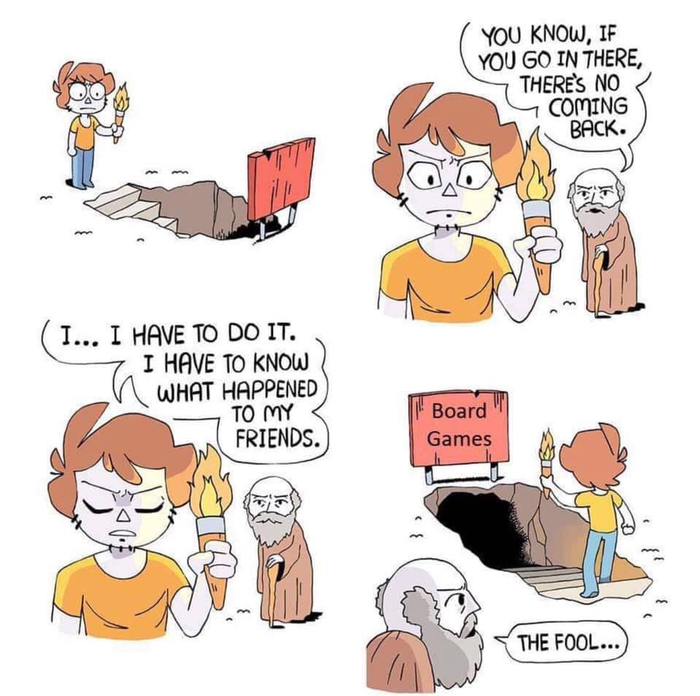 1. Did you come into the hobby through a friend? Which game was your first?

2. Also, what have you been learning about yourself recently that showed you've already come too far and there's no turning back? :)

1. Anna and I bought Ticket to Ride after we got married, but it wasn't love at first sight and it didn't pull us into the hobby (we played maybe 2-3 times total). @trentellingsen is the one who really pulled me into it and he introduced me to #Azul, #Love Letter, #Viticulture: Essential Edition, #Santorini, and #Root all in about a month

2. I'm starting to entertain the idea of buying games strictly for solo. That's it, really. And they tend to be the more expensive games too.

#Too Many Bones will likely be the first one, but I'm still hoping to play that one with Anna once I'm 100% comfortable with the teach. The really dangerous ones are games that have some of these qualities: (1) heavy on theme and provide an immersive experience, and (2) high production value.

Since I was little, I've had a fascination for learning new concepts/worlds/ideas, and frequently read books featuring famous quotes by people, kids books teaching science, history, and other subjects in cartoon form, folktales, and I've also read dozens (probably closer to 100 by now) of comics that are rich in worldbuilding. Because of this, #Pax Pamir (Second Edition) went really well for me and it placed all other Pax games on my radar. Still nowhere near pulling the trigger on any of them, but I'm going to have a hard time looking past the upcoming 2nd edition of John Company by Cole Wehrle. I'm attracted to the idea of playing a game with a backdrop of history that I'm not at all acquainted with. On the worldbuilding side of things, I've had my eyes on games like #This War Of Mine: The Board Game, but it still appears too much for me in terms of setup. And then there's #Oath: Chronicles of Empire and Exile, another game by Cole that looks absolutely amazing. I'm glad I'm still not crazy enough to buy a $100+ game that I don't even know I'd play more than once 😆

1. The first hobby game I played was #Catan, but it didn't really stick for me. It was okay, but I didn't love it. My wife, Kelsey, really enjoys it though. 2 or 3 years passed and somehow Wil Wheaton's Tabletop was suggested to me by YouTube. I'm not sure why. I started watching those, and that is what really got me into board game. The first game I bought was #Ticket To Ride followed quickly by #Carcassonne.

What podcasts do you enjoy listening to and would you recommend?

1. I did have a friend who introduced me to #Catan as my first hobby game.  Strangely enough, she wasn't super into board games in general, I think she had just learned to play because her brother brought home a copy.

2. I think I knew I was going a little bit crazy when I would just kickstart things that looked cool.  I have since learned to reign in the kickstarting mostly.  I definitely give things a lot more thought before backing a project or buying a new game.  I still have a little bit of an impulse buying problem, but at least I'm aware there is one!

Kind of glad I haven't gotten sucked into the KS craze just yet. I've only backed 3 games and 1 expansion so far. Had a couple of very close FOMO calls that I thankfully came to my senses about and canceled.

#Darwin's Journey might just be the next game I back....can't decide if it's worth the price

Oh wow that is pretty.  I don't think its too pricey though.  $55 isn't bad.  For me, kickstarter is a very dangerous place.  Its not just games but also game related paraphernalia, I see things like this and I'm all "oooohhhh shiney"

My problem is I want the "Collector's Edition" for no other reason than the FOMO for that expansion and the upgraded components. But $85...ehhh

Yeah I'm definitely not on your level with stuff like that haha. I don't even know what games I'd use it for

Oh yeah, discounted expansions usually get me too.  But now you have BGA, make a forum post and let everyone else decide for you!  haha

You'd use it for everything!  All those little trays you could put your components in!  I probably wouldn't get any of the card holders, just bowls of various sorts.

Yeah I'm sure that would go over well lol. Everyone just giving me more reason to spend money haha.

The bowls would be handy...but I have the bit bowls from BGG for that :D

It worked out ok the last couple of times haha.  I ended up not kickstarting it and you did so we're 50/50 between the 2 of us.

You got those little silicone bowls that fold up and take down flat?  Those are cool.  I'm a sucker for beautiful wooden things though like dice towers or boxes or things like this.  I don't buy any of these things generally, because I'm aware of budget and that we have small children so can't have nice things.  Or even really, don't play rpgs anymore so don't need to have dice boxes haha.  But I like to look and dream.

I just did it anyway without the poll lol. I watched some videos on gameplay and felt that even if Sarah hates it, I can play solo or get some of my friends to play with me eventually. And the extra stuff just seemed like extra stuff but there was a lot of it so I guess it's worth the extra 30 bucks? At least that's what I told myself lol.

Yeah my mother in law got me the bowls for Christmas last year. They've come in super handy and we try to color coordinate everytime we use them. Sometimes we do it so well that people think they're part of the game haha.

lol there's the cbrady we all know and love. I feel ya though.  I kickstarted #Aqua Garden on the strength of the fish meeples alone.

I wish my mom would get me useful stuff like that instead of random board games she's picked up from somewhere haha.

Okay that makes me feel not as bad. It wasn't like there was one specific aspect I liked it was more so like...do I NEED this stuff? Probably not. But do I know that? And the answer is definitely no lol.

I'm telling you, just ask! Haha I sent her a link otherwise I would have never gotten them

Right?  There's such potential for coolness there.  And you never know just how awesome its going to be unless you try it haha.

I dunno, I could maybe when my sisters all do the secret santa thing among us for Christmas, but i think largely my family might consider it kind of rude.  Ironically, for the people that are more difficult to get gifts for (i.e. my husband) they are always asking what he wants.  Maybe I should just tell him to ask for them haha.

Hahaha I'm sure he would love to get those for Christmas

Maybe he would appreciate it instead of all the t-shirts and jackets he normally gets. He has sooo many jackets lol.

Hey jackets are better than socks!

That is true... Socks don't take up as much space though.

Sometimes...you could have a LOT of socks

That's true.  Come to think of it, his mom always buys him socks for some reason.  He always has an extra pack lying around because he doesn't wear them out fast enough.

I think everyone's mom buys their kids socks for Christmas...

Mine doesn't.  I get tupperware haha

You can definitely have too much tupperware

True.  But my attrition to addition rate is pretty good right now.  My cabinet is full though so I can't fit anything else in there.

When does this strategy apply to board games? LOL

Umm no one said anything about this applying to board games.  Don't be jumping to conclusions lol

Of all the Kickstarters you backed during those times, was there any that made you wonder why in the world you had backed it? 😆

Maybe just #Pirate Den.  I think I just kickstartered that because of the pretty glass stones honestly and then justified it to myself that it would be a good kids game.

I also went a little too hard in for #Arcadia Quest: Inferno kickstarter.  I had just played it with my friend and really liked it and then the kickstarter happened and I was all like "why not?" to all the expansions.  I have only opened the base game so far.

Thought you were quoting T-bird’s last words from the 94’ Crow movie with that subject line (I was sadly mistaken).

My earliest gaming memories are the following:

I was in third grade when a schoolmate brought in his #Magic: The Gathering cards. After lunch we would play and that was enough for me to get hooked. Funny thing is his family moved after the summer and I never saw him again. I am still waiting for the Goosebumps book I let him borrow…

My late uncle whom came to live with us after a messy divorce would occasionally play #Monopoly with his son and myself. He played fast and loose with the rules as I think a majority of people do. Honestly, the most memorable parts of these games were when anyone would land on a space he would proclaim loudly “pay me !@#$% (<- technical name for a female dog)” in Portuguese. In retrospect, he was heavily intoxicated during those plays. Good times.

As far as a watershed moment, I‘ve had a few…

I’ve played 3 CCG/TCG’s fairly competitively (#Magic: The Gathering, #Vs. System, and #Dragon Ball Z CCG). That was a lot of storage boxes and a heap of cards. I don’t want to think about how much coin I’ve dropped. I do wish I could have held onto my magic cards as some would be worth a ton more now.

When I got back into gaming (insert a paraphrased Godfather 3 quote here), it was mainly through card games that played like CCG’s/TCG’s. As I started getting into euro games I started running out of space to store things and had to look for storage places. My trip to Ikea to purchase a 5x5 kallax made me realize I’m too far in.

To quote T-bird, “There ain't no coming back”.