Maracaibo vs Totihuacan: City of the Gods

I liked the solo for #Teotihuacan: City of Gods a bit better and found that one to be a bit more challenging as well.  The solo experience was slightly more challenging to run with this game and was not quite as intiutive as most solo experiences I've had but once I picked up on the turn-by-turn play it wasn't too hard.  The first play through I was trying to really figure out how the action board worked together and devise some form of strategy.  The second play through I did a little better and had more of a focus on building the temple and to get my workers powered up together on the same action boards (for more powerful actions).

#Maracaibo certainly has a fun solo experience but I think it will end of being a better multiplayer game.  The solo boat travels around the board so fast that it feels a little shorter than you want the game to be.  That being said it is fun and I look forward to soloing this one again though likely employing the legacy tiles and story mode the second time around.  The symbology was a little tough to grasp the first time around and I totally cheated.  The second and third playthroughs were much more balanced with me losing one and winning one.  Getting those assistants out on the board fast and making use of them is huge in #Maracaibo!  It was definitely a challenge racing against Jean (the solo merchant).

I think I'd give #Teotihuacan: City of Gods the edge as far as which one I liked the best and definitely for soloing.  Both are great games and I really look forward to playing with the story mode in #Maracaibo to see how that changes the dynamic.  I would recommend both especially if you are looking for a slightly heavier game experience.  If you like your choices narrowed just a bit go with Maracaibo.  If you like more open ended decision making with lots of options go with Teotihuacan: City of Gods.

Thanks for the comparison. For a while I really wanted to pick up Maracaibo but I've cooled on it recently.

Interesting, the more I think about these games, the more similar they feel in a sense. They both are essentially rondels with multiple paths to victory, Teo is more cyclical so at times you have all 8 actions available, while with MAracaibo you are more limited in what you choose on the Rondel. interesting.

I know you mentioned how intuitive the solo variants are, but how intuitive was learning and playing the game from your perspective as the player?

Maracaibo was a little easier to run and made the most sense to me based on other solo games I've played (Paladins, Architects, Trismegistus) with the symbology being about at challenging to figure out as Trismegistus.  Once I got into the game and worked out the various symbols and game actions it became easy fairly quick.  Teotihuacan has an intersting "pyramid" mechanic it employs for choosing automa actions.  It took me staring at the instructions a very times and reading though them slowly to get it down (I may be slow though...take it with a grain of salt).  Once I figured it out and was able to run it smoothly I felt like the Teotihuacan solo experience was slightly better than the Maracaibo experience.  For now I rate Teotihuacan at 9 and Maracaibo at 8.75.  I'll probably adjust those somewhat after getting it to the table with others.

I feel like both of these are heavy on the symbology so it is interesting to hear that that element stuck out to you so much more in Maracaibo than Teo. It sounds like you have had a very positive experience though with both of them! I am curious to hear how your experience grows as you experience some of the legcay-esque aspects of Maracaibo!

How long did your solo sessions last?

How long is does each one take to setup?

Teotihuacan takes about an hour or slightly less to play through solo and Maracaibo is about the same and maybe even slightly shorter depending on how long you ponder decisions per turn.

Teotihuacan has a slightly shorter solo set up of maybe 10 minutes and Maracaibo is around 10-15 due to having a few more pieces to deal with.

Setup for Terraforming Mars is probably not too far off for comparison.

Thanks for that. I'm am thinking that Maracaibo may be in my future.... Sometime. 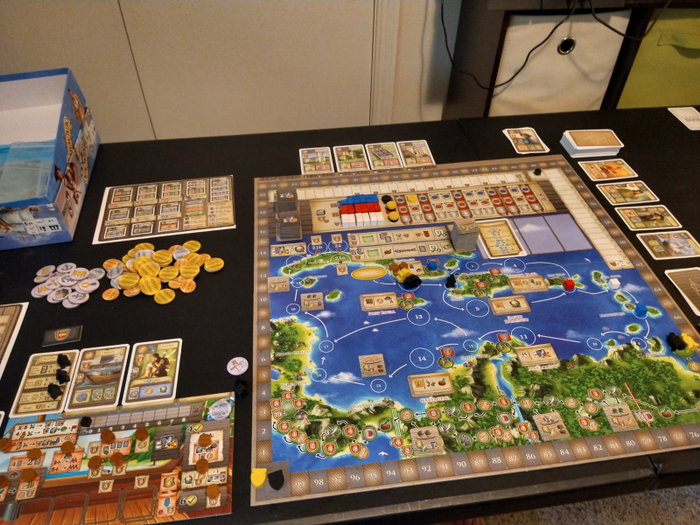 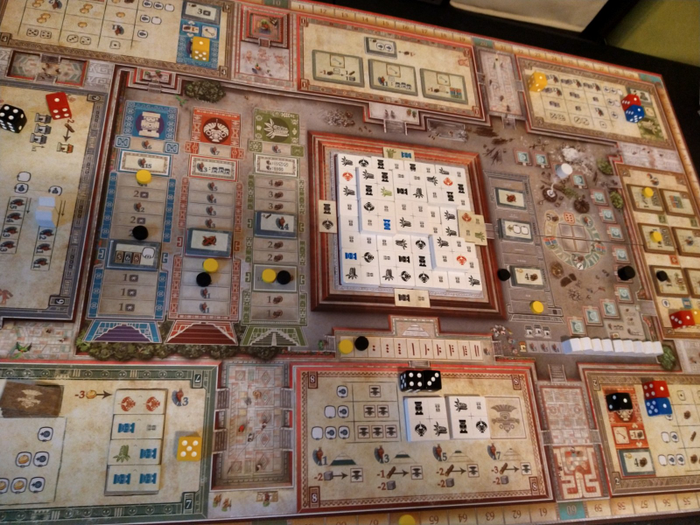