#Imperial Settlers: Empires of the North is a gorgeous tableau builder/ engine builder game set in the Imperial Settlers universe. In this game, players utilize pre-built clan decks to build and explore their way to victory. 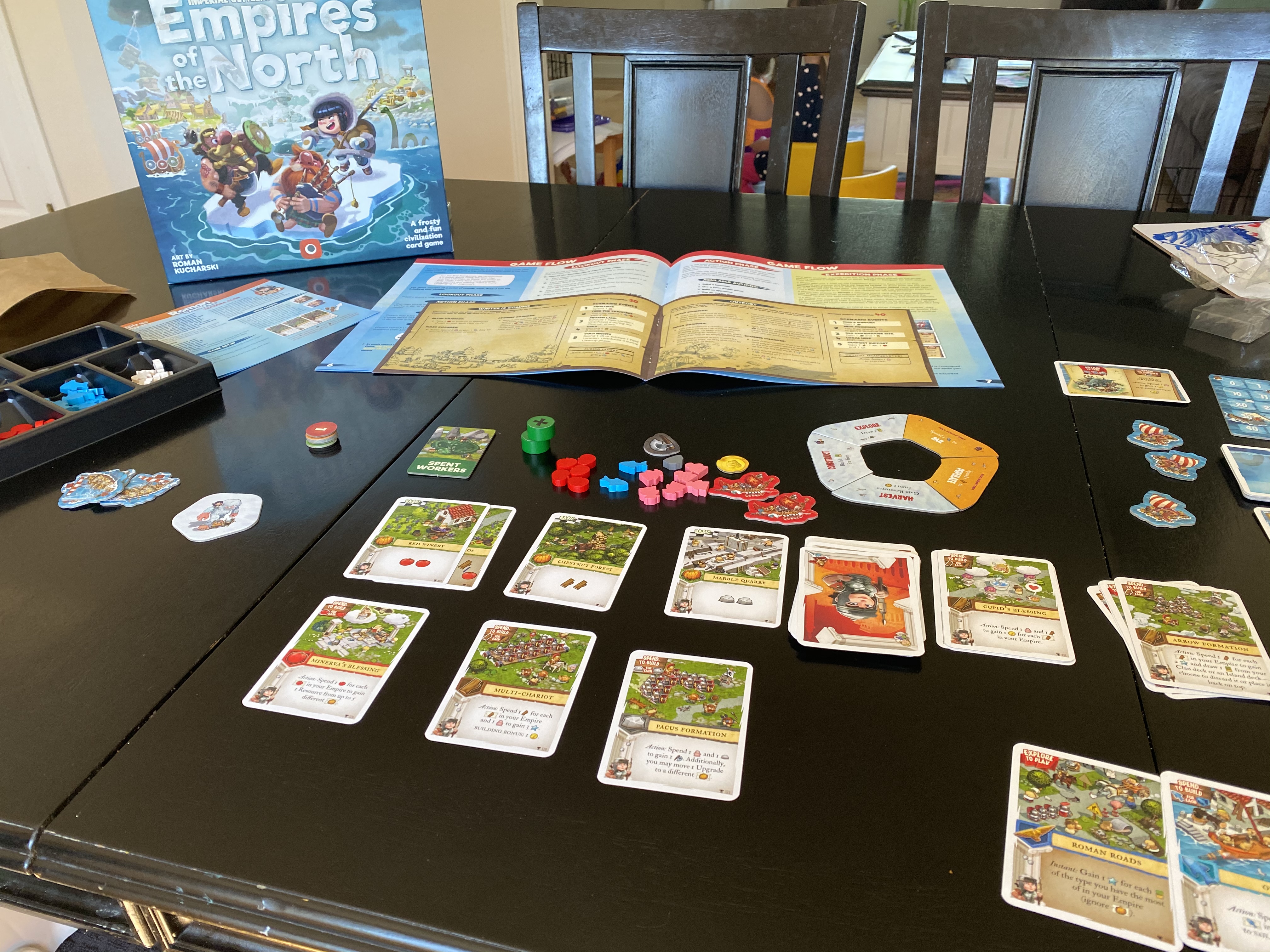 An interesting twist to this game is a central action rondel that allows players to use bonus actions and oftentimes play extra cards while using rondel actions.  Also fascinating are the nearby and distant islands that players can explore for a one-time bonus or add to their tableau for ongoing bonuses.

This game is well-respected for its solo mode which features a scenario book with different goals and mechanics for each scenario.

Now for the Brian's Battery review:

(+++) Component quality in this game is off the charts. The meeples and resources are lovely and well-crafted wooden bits. The card quality is phenomenal. The cardboard tokens are nice and thick. The game even has an amazing and extremely functional insert. It's incredible that this game doesn't cost more than it does. One very minor niggle is that you have to put stickers on the action tokens. Not a big deal at all but I found it a little odd.

(+) The rule book is well-written and clear.  I like the paper that it's printed on as well. Good examples throughout. Only minor quibble is learning which factions use which ship tokens.

(++) Juicy and satisfying yet relatively short play time. This game manages to hit that sweet spot between depth and manageable play time. It's got great strategic choices but doesn't take many hours to set up and finish. I love the possibilities each hand presents.

(+) Loads of Potential for replay - multiple clans, scenarios, and playstyles means that there's always something new to learn. I was initially worried about the pre-built clan decks but they offer tons of nuance and learning each clan is a joy. The developer has even released additional scenarios online.

(-) I haven't played this multiplayer, but I can definitely see how some would consider this to be multiplayer solitaire. There are definitely a few opportunities for player interaction but it's decidedly not the focus of this game.

(+) Solo mode is pretty good. I really enjoy the scenario-based gameplay and the lack of an AI opponent doesn't really bother me. That said, it's just a step away from a "beat your own score" type of solo mode. But that's mitigated by the scenario win conditions.

All said, this game is definitely great. The clans are all totally unique and it's really fun trying to find the one that fits your preferred playstyle. As a solo game it occupies that great spot where it offers a great depth while not taking forever to setup or to finish. I can definitely see this becoming one of my go to games for a quick game to play during afternoon quiet time for my kiddos.

As a side note - expansions for this game are coming out fast and furious. The third expansion has already come out and it looks quite interesting.

The art is growing on me more and more.How do you like the art?

It's great. Keeps the tone of the game nice and light. Although personally I think I would prefer a more serious style, but that's just me.

I mostly agree with your thoughts, though I personally don't care for the paper in the rulebook; it feels cheap to me. It mostly is multiplayer solitaire too. I don't mind that some of the time, but I'm sure some people do.

Hmm. It's definitely not the best ever but it still feels decent.